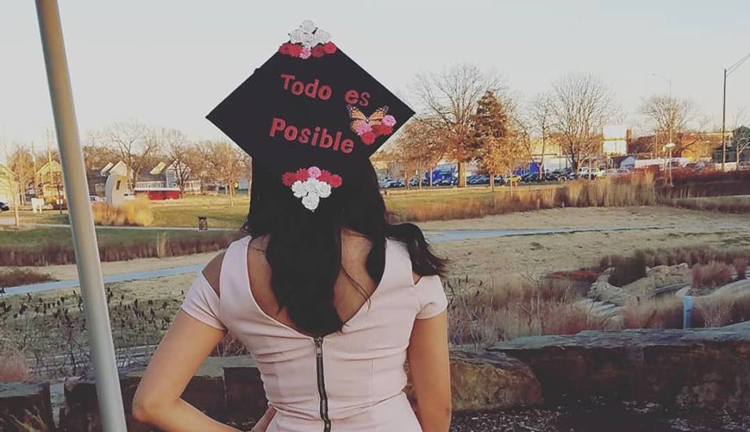 Everything is possible | Alejandra Ayotitla

One week before her permit was set to expire, Dreamer Alejandra Ayotitla traveled to Washington, D.C. to urge legislators for action on the Deferred Action for Childhood Arrivals (DACA) program, which protects her from deportation.

Ayotitla, who has lived in the state of Nebraska for 14 years, travelled to the nation’s capital with a group of Dreamers to the Nebraska Breakfast, a tradition held in Washington D.C. that welcomes Nebraskans to speak informally with the state’s congressional delegation. “I would like to see more commitment by the Congress. Not from the public, I think people understand and support [the Dreamers] but Congress is still not there,” the 22-year-old said.

The Obama administration created DACA in 2012 to protect undocumented immigrants brought to the U.S. as children and allow them to legally live and work in the country. President Donald Trump announced its termination in September last year and gave Congress six months, which ended on March 5, to come up with a solution that could substitute the program. After his announcement, Trump gave one month to the Dreamers whose permit was set to expire before March 5 to renew their status.

This didn’t apply to Ayotitla, whose permission to legally stay in the country expires in November. Ayotitla immigrated to Nebraska from Hidalgo, Mexico, at age 9 with her mother and sister to reunite with her dad, who came to the state years before. She received DACA in her freshman year of college, and since then, she has worked at non-profit organizations that work towards the improvement of immigration policies in the state. She promoted an effort in 2016 to get licenses for DACA recipients in Nebraska -which was the latest state in the country that allowed Dreamers to drive four years after the program was incorporated- and later on the professional licenses for DACA.

Despite raising her voice whenever DACA has been threatened, Ayotitla’s future has been on a limb ever since immigration became a major issue in Trump’s campaign. “He [Trump] got elected one month after my last semester of college began and it changed everything. All of my plans after graduation were thrown out the window,” she said.

The recent University of Nebraska-Lincoln psychology graduate hoped to find a full-time job and live on her own after college. Although she feels her future has never been entirely in her hands, she intends to begin law school this fall to continue fighting for the rights of immigrants in Nebraska. “One of the things I’ve noticed since I started working in Appleseed [a non-profit organization in Nebraska] is that there are few legal resources in the state, especially in rural communities where people have to travel for hours to find a lawyer. I would like to give more legal access to these communities” she said.

Despite her desire to advocate for her community, she wouldn’t be able to practice her profession nor have a driver license without a DACA status. Finalizing DACA also implies a possibility of being forced to leave the place where she has already constructed her future.

Days before the deadline arrived, the Supreme Court revoked Trump’s request to end the program, claiming it as an illegal decision, and giving more time to Congress to discuss the issue. Even though this gave a temporary relief from deportation, long-term planning is still a challenge for DACA recipients. The current program extends for two years, which require DACA recipients to pay $500 every cycle in order to re-apply.

Young immigrants who don’t have DACA, but qualify for it, don’t have a permeant solution either. Alexis Steele, an immigration attorney in Nebraska, explains the Court’s decision applies to Dreamers who are currently part of the program, leaving out the applications of young undocumented immigrants who have not received a DACA status before.

The Court’s decision is also seen by many as a pause in the Congress’ debate on a permanent solution for DACA. In the past, President Trump has pushed for an alternative that incorporates other immigration proposals related to border security and legal immigration cuts in exchange for the Dreamers’ protection.

Steele said a proper option would be a clean Dream Act, which is a long-term solution with a path to citizenship that’s not tied to unrelated policy issues such as building a wall. “These individuals are already here, so it has nothing to do with border security. They are some of the most upstanding members of our community which has nothing to do with security,” she said.

Ayotitla said legislators are treating this issue as a political game “when there is so much at stake.” She said a renovated DACA program should allow Dreamers to count on a stable and long-term solution that supports immigrants’ ambitions to contribute to the country. “I don’t think anyone deserves to plan their lives in two-year cycles,” she said.