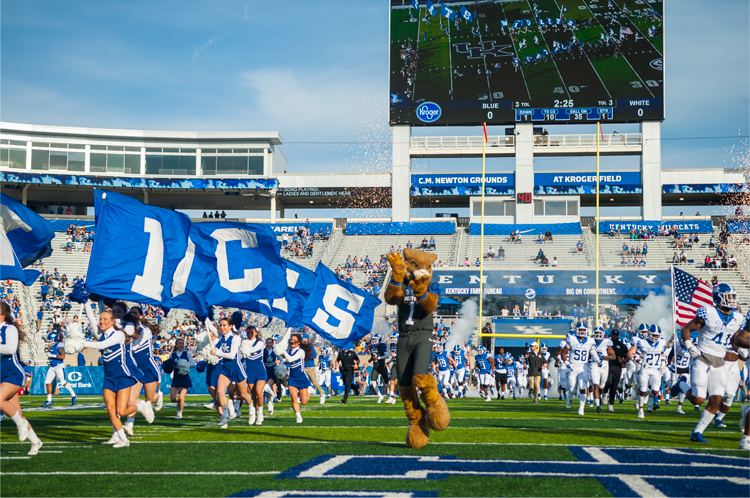 The Wildcat cheers on the Wildcats as the Rabbit with her Nikon camera can be barely seen up on the big screen with a row of professional photographers capturing the action. | Melody Li

When the Rabbit from China meets the Wildcat, only the cheerleaders look familiar

When the Rabbit with her camera bag stepped up to get her media credentials to hunt the Wildcat, the number on her vest spoke to her about both luck and death.

The rookie photojournalist now was ready to join the pros wearing “84” on her chest. Whereas lucky No. 7 brightens American culture, the number 8 in China costs more if you want it for your phone number or address. 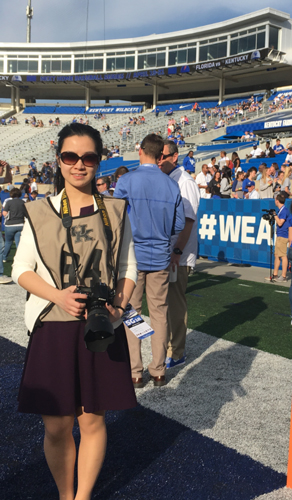 When China rolled the dice to burst on the world stage hosting its first Olympic Games, the Opening Ceremonies began at 8 minutes after 8 o’clock on August (8th month) the 8th in 2008. No coincidence. The number 4, however, when it’s pronounced, sounds dangerously close to the word for “death.” After all, it was Friday the 13th, though that’s a far scarier date in the Western world than in China.

Would the Rabbit, at 5-3, 110 pounds, get run over by a Wildcat, let’s say a 6-1, 248-pound middle linebacker like Kash Daniel, on the sidelines during Kentucky football’s annual Blue-White Spring Game? Maybe her rabbit’s foot will save her. Many Chinese people, like athletes, tend to be superstitious.  On the fifth day of the Chinese New Year, which began this Year of the Earth Dog on Feb. 16, Chinese people flock to temples to toss in money to ensure a profitable year for themselves and their families.

The Wildcat is the mascot of the University of Kentucky. The Rabbit is Dr. Melody Li, a visiting Chinese literature and language professor at Transylvania University who was born in 1987, the Year of the Fire Rabbit. Famous rabbits range from Fidel Castro (Communist) to Frank Sinatra (Crooner). Here’s a quick sketch on them:

“The Fire Rabbit is a very friendly and sociable person who loves socializing and getting along with everyone and is liked by a great deal of people for their honest qualities.” 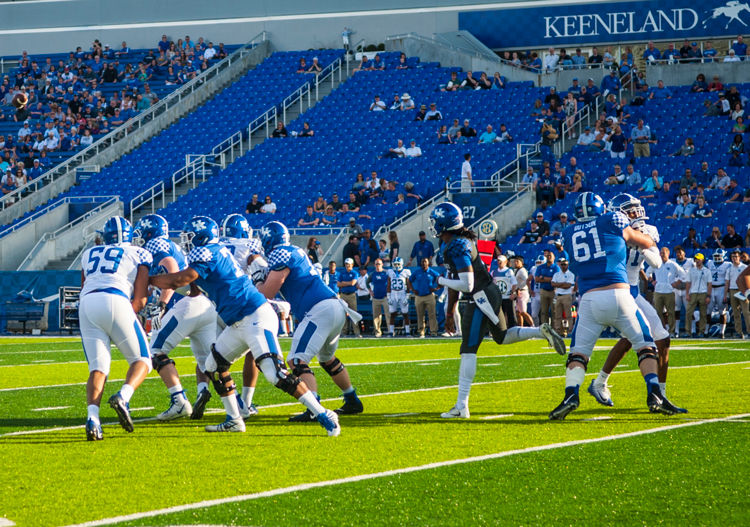 The Dragon, UK starting quarterback hopeful Terry Wilson (No. 3), fires a pass down the field, thanks to stout blocking by his offensive line. | Melody Li

Were you scared out there? “A bit intimidated but not scared,” Melody says. “More excited than scared.” Melody brought her mother to the game with her. Neither of them had ever seen American football live. “It’s so different from Chinese football,” Mrs. Li says. “In China we would only expect the football to be kicked by foot.”  Mrs. Li’s  young national football team competes against Spain and other well-established powerhouses in the World Cup soccer championship series.

Only the cheerleaders are a familiar sight to Melody Li, a former college cheerleader herself, and her mother. | Melody Li

Mrs. Li is a photographer, too. After she helped her daughter with her 20-pound bag of Nikon camera gear, Mrs. Li whipped out her cell phone and started taking pictures of UK’s 23-time champion athletes. “The cheerleaders are the only thing familiar to us,” Melody says, surveying Kroger Field. “In China we have cheerleaders, too, but their outfits are much sexier.”

Taking a break in the press box, in search of fried chicken (no, not KFC), Melody and her mom settle in to watch the game on big TV screens. “What do you call it when they jump on each other’s bodies?” Melody asks her guide, the Fire Monkey.  “Tackling,” the guide says. 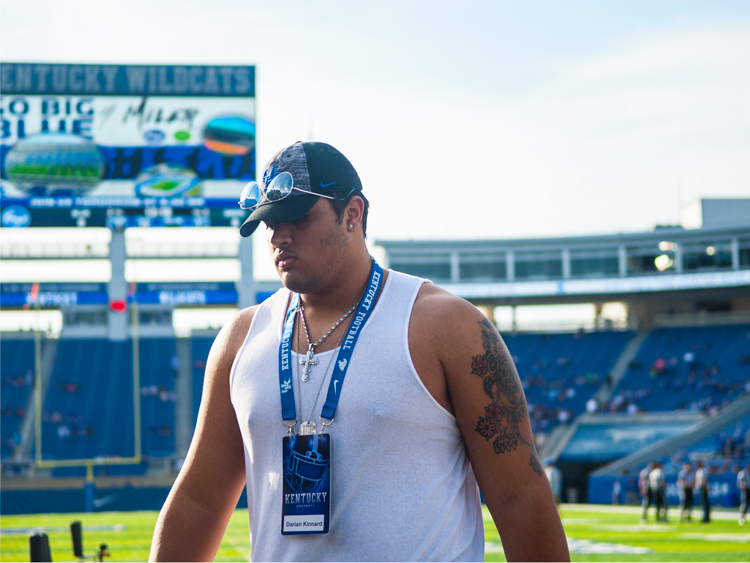 Melody captures an image of the Boy With the Dragon Tattoo. | Melody Li

Although China is familiar with the wildcat as a creature, the most powerful one is the Dragon. For Melody and her mom watching the action, the quarterback is the Dragon.  “We have an expression you need to know to understand football,” the Fire Monkey says.  As he aligns paper coffee cups in offensive formation on the large roundtable where Mrs. Li is eating a hot dog, he points to the quarterback cup behind the center cup. “If you have two Dragons, you don’t have a Dragon,”  the guide says.

Indeed, the battle for the starting job at quarterback is still on between Gunnar Hoak (14-for-25 passing for 121 yards and one TD)  and Terry Wilson (10-for-24 for 131 yards and one INT). “I’ve never seen her like this,” Melody says of her mother on the edge of her seat, occasionally throwing up her hands like a ref calling a touchdown. “Can we come back in fall?” Melody asks with eyes like moon cakes baked big and round as the symbol of balance (ying and yang) for the Mid-Autumn Festival, which begins Sept. 24 based on the lunar calendar.

“I like the Blue team,” Mrs. Li says deep into the third quarter. “They are better.” As a football analyst, Mrs. Li has a future. Final score: The Blue Team (offense) 45, The White Team (defense) 32.

Welcome to America, Mrs. Li, where the national pastime switched from baseball to football in your daughter’s lifetime. Now if only UK’s marketing team can use the power of UK football to hunt down new fans like the Li’s in China, the Big Blue Nation could grow by 1.4 billion members.

Melody Li, a Fire Rabbit, is a professional photojournalist, a dancer and a former college cheerleader. She holds a newly minted Ph.D. in comparative literature from Washington University in St. Louis. She is completing her role as a visiting professor at Transylvania University in Lexington and will begin work as an assistant professor of Chinese literature at the University of Houston in Fall 2018.