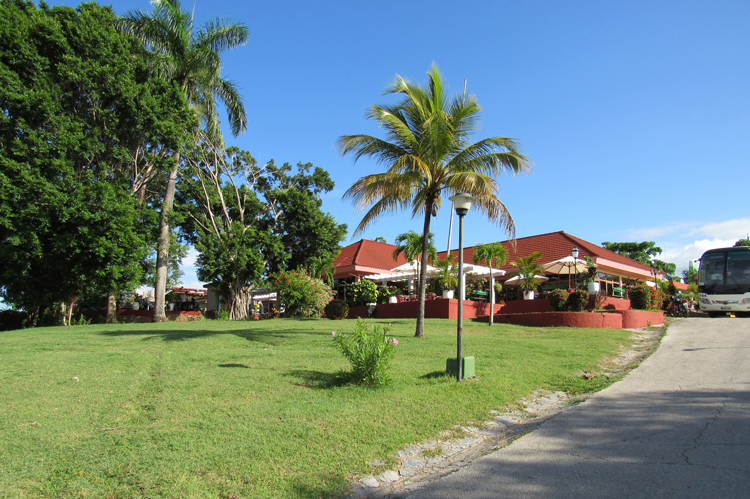 A view from the front of Hotel Las Cuevas Daniel Bailis

Aiking up the steep asphalt path towards Hotel las Cuevas, the oldest hostelry in Trinidad, Cuba, with the midday sun beating down on your back is an endeavor to say the least. But compared to the excitement of a first-time visit, or a well awaited return, it is a small price to pay. The view of the green grass incline from the grey brick sign at the bottom is only the beginning of exciting views, times and memories.

The layout of the southern Cuban getaway is unique to say the least. Instead of building the hotel up, the owners decided to spread it out across their low mountain side property, with guest cabins spreading from the very front to the far back. The complex is decorated in beautiful blues, greens, reds and yellows, the symbolic colors of Cuba, with the lobby, bar and lounge located smack dab in the middle. 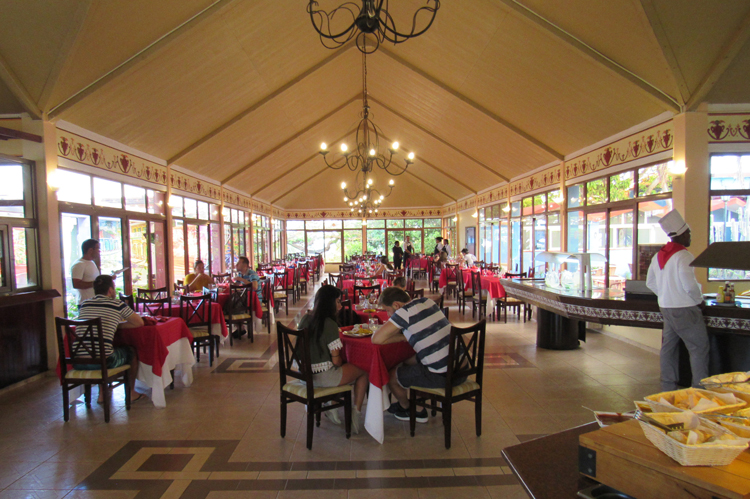 Inside you will find a friendly and hospitable staff looking to help and serve you in every way possible. Off to the far-left corner lies the bar where resident mixologist Heni Medina shared some numbers and information about it.

“Standard mixed drinks at the bar are 3 CUC” (around $3), explained Medina, “but if you ask for top shelf alcohol they will cost a little more.” Compared to other hotels in Trinidad where a daiquiri or mojito could run you anywhere from 3 to 6 CUCs, the bar at Las Cuevas is quite reasonable. Medina also stated that the busy season for the hotel is December through May, but that even now, in mid-July, they were at full compacity. The canchánchara, a unique drink to the town of Trinidad made with rum, honey and lemon, was just strong enough and mixed perfectly.

The patio off the back of the bar stretches out in a semi-circle with enough room to seat close to 100 guests. There you can take in the jaw-dropping view of the city and the mountains from the same vantage point. It is a perfect spot for anyone wishing to document their journey through photos.

During the afternoon, from 3 p.m. until 6 p.m., the space is more or less empty. All the guests are out touring around the city and eating, which gives the seating area a sense of serenity. As you sit relaxing with a small snack or drink, the sound of silence penetrates your mind, washing away the strain of early morning hikes and excursions, while at the same time getting you ready for the night ahead. 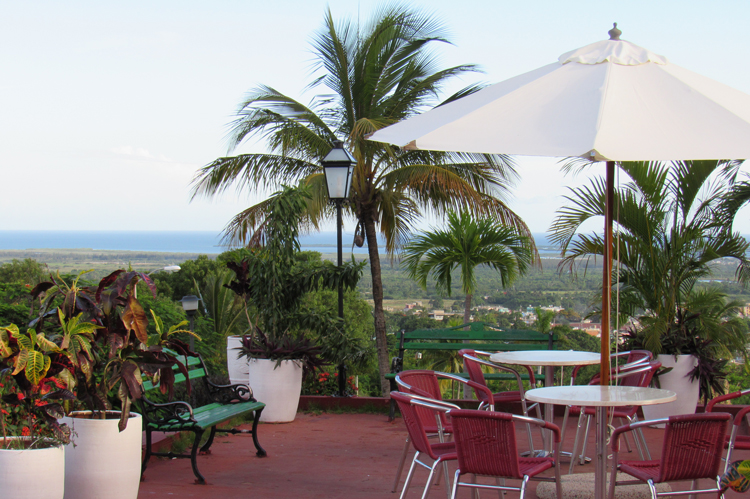 Around 6:30, hotel performers begin setting up on the small stage outside. George Adrian, an inhouse dancer, singer and entertainer, said that there was a show every night at the hotel. Some nights are devoted to comedy, others music and dance; shows can even include magic and stunts using fire, swords and knives. 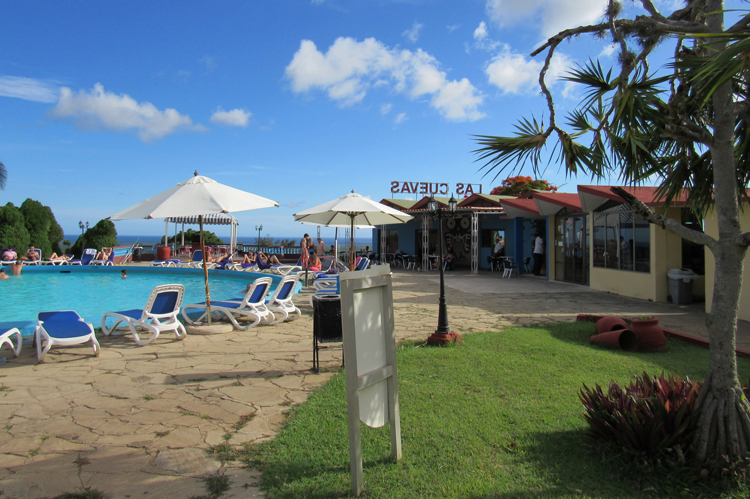 Nothing makes a vacation more enjoyable than a cool dip in a crystal-clear pool, and luckily the hotel provides this luxury as well. Towards the back of the property there is a sun-drenched cement porch, populated by guests looking forward to a nice tan followed by a swim in the circular, baby blue piscina. Many foreigners enjoy this spot, coming from places like France, Germany, Poland, Spain and all over Latin America. Venus, a Cuban woman traveling from Havana with her husband for historical work, mentioned that they were only staying for two days, but that so far, she was loving it.

“Though it is a bit expensive, it is extremely beautiful and very clean”, she added. She sat and drank pool side with her significant other after a long day of travel, clearly relaxed. 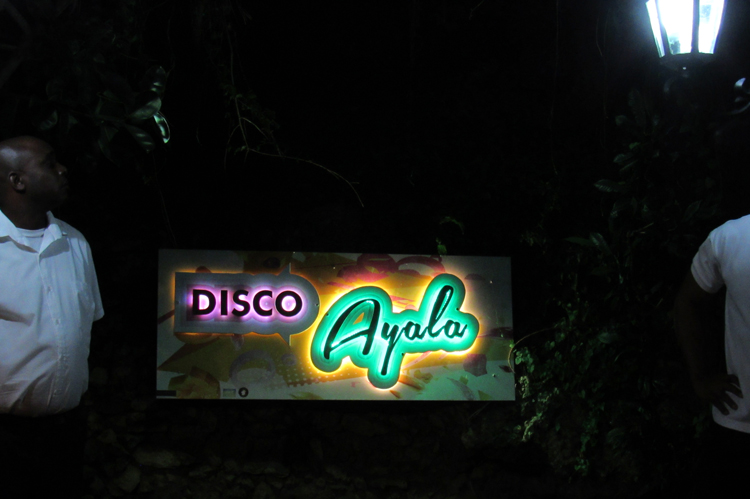 During the day the hotel is a great place to relax and catch some sun, but at night it is time to live a little. Disco Ayala is a club located ten minutes away from the property and is also owned by Las Cuevas. Well-traveled guests may believe they’ve seen it all when it comes to the night scene, from Budapest’s ruin pubs to Berlin’s techno bars, all the way to Havana’s numerous salsa clubs, but Ayala is not just an ordinary club due to the fact that it is located inside a natural cave. The small neon sign out front is invisible for those standing below the rock face which gives it a feeling of exclusivity. Descending the stairs into the massive party pit you can faintly hear pop, disco or salsa reverberating off every rock. As you finally enter through the narrow pass by the bottom of the stairs, red, white and blue strobe lights awaken your eyes while the music swarms your ears. You’ve arrived.

Up the white tile stairs at the far end lies the bar, where Javier, who has worked for five years at the club, stopped what he was doing to answer some questions. “I love this job”, he answered when asked about his profession. “It is always exciting, and I meet people from all over which is fun.” Javier also gave some insight about the name Ayala which was the surname of a Spaniard who used to take people down into the caves and kill them. Even after he was done in by the people of Trinidad for his heinous crimes the name stuck and to this day it remains as a historical reminder. 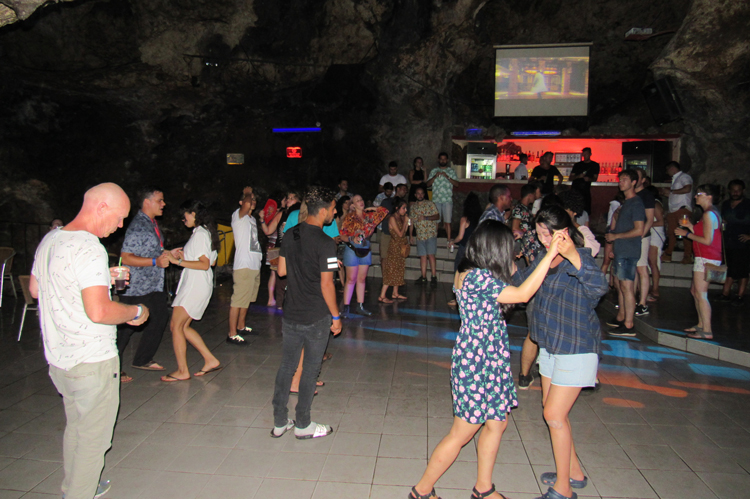 Travelers enjoying a night at the party cave | Daniel Bailis

With the dance floor covered by tourists speaking English, German, French and Spanish, saying that Ayala is a melting pot is not an overstatement. Two friends from the Netherlands, Robin and Rubin, who seemed to be a dynamic duo, admitted that they loved the club. “The mojitos are a bit pricey, but it’s a party in a cave, it’s worth it”, said Rubin. He seemed to hit the nail right on the head since many others said almost the exact same thing about Disco Ayala. As one o’clock rolled around people poured into the underground gold mine to take part in the action, and by 1:30 a.m. the place was full. People drank, partnered up and danced, and every last soul was free and happy.