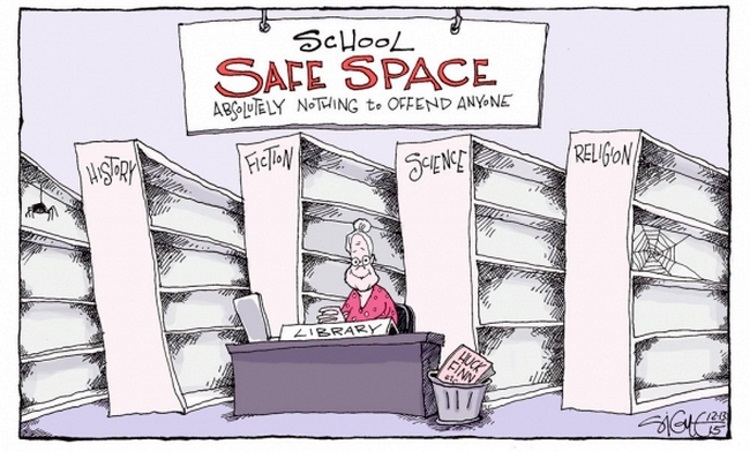 “There are too many terms these days, these kids are all such sensitive snowflakes.” “Social media has ruined young people, they can say anything they want behind a keyboard.” As a millennial I constantly hear phrases like these, and I am overwhelmed by the hypocrisy. On one hand “modern” dialogue is criticized for being overly “PC” having an oversaturated list of terminology and making it seemingly impossible to express a viewpoint without insulting another. On the other, the “social media” generation is harangued for creating a world of violent language and insults thrown with no consideration or accountability. These opposing views have lead to the omnipresent feeling that expressing opinions will lead to conflict of some kind. Young people are bombarded by a throng of opinions and beliefs that are presented as ultimate truths, which leave no room for opposing ideas. Instead of debates, there are vehement one sided arguments that are meant only to strengthen those who already believe and accuse those who do not. Moving forward, a compassionate hate which listens and respects opposing beliefs while still maintaining personal views, will lead to more cohesive communication.

First, let’s address the sensitive snowflake movement. The “snowflake generation” is the idea that young adults from the 2010’s and onward have an inflated sense of their own uniqueness and are sheltered from the harsher realities of the world. They are then prone to being hurt more easily than previous generations and are more emotionally vulnerable due to their idealistic upbringing. There is no way of denying that this is partially true, yet, as a member of this generation, I do not think the idealism is flawed itself. Instead, I believe the outcry is usually more reactive than necessary and unappreciative of the mountains moved by civil rights and social justice warriors of the past. The issue that arises from the snowflake generation, is their inability to communicate with anyone whose opinion is different than theirs. Furthermore, they simply steer their sights away from anything that could cause controversy. George Harrison from The Sun sums this theory up by saying “Snowflakes gasp in horror when they hear an opinion they don’t like, and believe they have a right to be protected from anything unpalatable.” Sensitivity in itself is not harmful, but the “protection from anything unpalatable” can be devastating to upcoming generations. We have lost an ability to create a dialogue of differing views, someone whose beliefs are not mainstream or well liked are automatically villainized. Furthermore, they are not given the time or space to communicate their truths. By denying people with unpopular opinions the ability to speak with the same reverence given to those accepted by the mainstream, you do not change their minds you simply add to their fire and hate.

This hate is evident on any social media platform. Not only from muffed idealists who feel their opinions are not being taken seriously by those around them, but also by those who feel their entire being is seen as less than the ideal and accepted. There is a common thread amongst those who feel the need to speak out hatefully towards celebrities or political figures: anonymity. Violent or hateful words from behind the safety of a keyboard and screen are common and lead to aggressive outcomes. Furthermore when looking at the demographic of those using anonymity to express their opinions, a September Pew Poll “forty per cent of people in the eighteen-to-twenty-nine-year-old demographic have posted anonymously.” Leading us to the conclusion that as age decreases the desire to remain anonymous while still voicing opinions increase. Professor of communications Arthur Santana at the University of Houston conducted a study on the rhetoric of anonymous and non anonymous comments using nine hundred randomly chosen comments posted on articles about immigration. Half of these comments came from news outlets which allowed anonymous postings and half from ones that did not. He found that writing anonymously made a large impact, “…a full fifty-three percent of anonymous commenters were uncivil, as opposed to twenty-nine per cent of registered, non-anonymous commenters. Anonymity, Santana concluded, encouraged incivility.” Although there is a large community of users who chose to participate anonymously simply to anger or discourage what they are commenting on, it is evident that in a social climate that chastises those with unpopular or uncommon views faceless expression may be their only outlet.

Compared to the over protective snowflake generation, the internet becomes a playground for those who do not feel they can express themselves within their community. While it is evident that hate speech should be condemned, the vocalization of fringe beliefs must become more tolerated. Allowing and encouraging unpopular or uncommon values to be discussed openly takes away the social pariah aspect. People will not change their core by being told they are wrong and should hide their convictions away in shame, this only leads to a festering hate for a society that has no place for them. Instead, we should be practicing what I call compassionate hate. Attempt to understand opposing views, and if you are adamantly against said person’s ideas allow yourself to hate the idea but have compassion for the fellow human being who believes in them. Having compassion for someone does not mean you need to agree or spread their message, instead you are helping to create a space where they can be heard and respected. As Yogi Bhayan said, “Understand through compassion or you will misunderstand the times.”