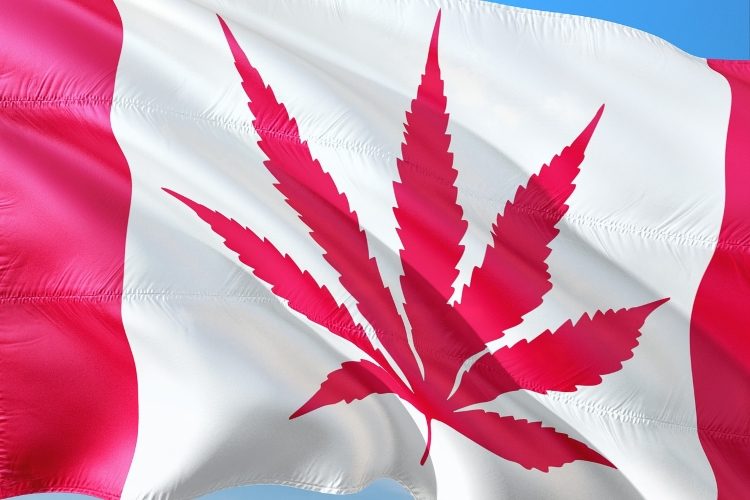 An interesting take on the Canadian flag | RonnyK

Canada and Cannabis: A Love Story with No Happily Ever After

On October 17, 2018 – better known as “Legalization Day” – Canada legalized recreational marijuana. Total sales that day were upwards of $1.8 million Canadian, while shortages were reported throughout the nation.

Following Uruguay, Canada is the second country to entirely legalize the consumption and sale of recreational weed. See, Canadians have an intimate connection to pot. Every part of society, from workers to bankers, smoke up. In fact, the past two prime ministers have admitted to puffing on the devil’s lettuce.

The current liberal prime minister, Justin Trudeau, actually billed marijuana legalization as a core plank in his successful election campaign. The last national survey documented estimates that approximately 3.4 million Canadians used cannabis in 2012. About 12% of the national population, and a third of young people, have at least tried getting baked.

So, Canadians love their Mary Jane, but how good is it? Well, Canadian kush is known for its quality. Canadian cannabis manufacturers, like the BC Bud Depo, have won in major competitions like the prestigious High Times Cannabis Cup.

Canadian medical research into cannabis has also been ongoing since 2010. So those rumors that the extremely potent UBC Chemo Kush was made in the 1970s at the University of British Columbia by famed environmentalist David Suzuki just aren’t so true.

Will Canada become the “new Amsterdam”? The wheels of weed tourism are starting to turn. With businesses like cannabis sushi bars, Bud-and-Breakfast joints, and high yoga, Canada’s pot industry will certainly expand into tourism.

Another caveat to consider is the amount of infrastructure actually set up to date. For example, if you plan on going to Toronto to go to a store and buy legal bud, you’re out of luck. The Ontario Cannabis Store (OCS) won’t set up stores until April and only delivers online.

So, if you’re planning a trip to Canada soon, swing by Montréal for some of those jazz cigarettes. Also, be aware that not every country is very happy with the idea of their citizens getting high in Canada.

How does legalization actually work? The federal government in Ottawa has legalized the possession of up to 30 grams of dried flower and the maintenance of up to four plants in a home. It has also instituted age restrictions as well as other minimum standard regulations, but has left the provinces space to add regulations as well as determine distribution.

For Trudeau, good bud and a lot of politicized young stoners made a good political recipe for legalization. But in reality, the long timeline of legalization has seen one battle after the next fought by cannabis activists to legalize the popular drug since the 1990s. Whether in court cases or during the annual 4/20 smoke-ins across Canada, activists have been able to slowly win the public battle for legitimacy.

What does provincial jurisdiction mean? Effectively, Trudeau passed the buck on a national company for mass kush production. Instead, he passed a massive question of public/private ownership of marijuana production to the provinces.

In Ontario, progressive conservative Premier Doug Ford, a former hash dealer himself, has recently come to power and is trying to run the OCS into the ground. Effectively, he’s trying to replace it with a free market for marijuana.

The OCS is understaffed and ill-equipped – 14 days into legalization, there were over 1,000 complaints to the ombudsman’s office. Shockingly, in the last economic update, the Ford government actually announced that the OCS would be operating at a loss of $8 million. While Ford is well-equipped to be Ontario’s top dealer, he’s more than happy to turn over public infrastructure to his private sector pals.

In Québec, the right populist CAQ government have been trying to limit cannabis use as much as possible. Shocking many, they proposed a ban on marijuana in public spaces and raising the legal age of consumption to 21. Restricting access to marijuana in this will only serve to criminalize young people and people of color who may lack the luxury of a suburban backyard to enjoy those good giggles. Provincial jurisdiction has meant legal distribution and consumption are still taking shape.

How will law enforcement work with the new regulations? High driving has made its way into the public consciousness. Roadside testing for cannabis impairment is just one of the latest policing controversies in an age of legalization.

As police officers can also smoke recreational weed, how far in advance must they blow trees before turning up for work? On this question, friction has emerged between police chiefs and the associations all over the country. In Toronto, where the chief mandated a 28 day clean period, this conflict has been sharpest.

This is particularly rich, given the Toronto Police Services has been needlessly aggressive in the leadup to legalization. For two years, as legalization was being worked out, the police were organizing raids on cannabis dispensaries. In one well-known incident after a raid, two police officers consumed edibles while on duty; one of them ended up in a tree.

The black market is gone, right? A major argument for legalization of marijuana in Canada is that it would take power out of the hands of drug dealers and put it into the hands of regulators. Buying cannabis on the street always ran a risk of product being mislabeled, laced, improperly stored, etc. Regulated weed was supposed to be uncontaminated and approved by the government, with many medical producers naturally moving into recreational pot markets.

A few factors revived the black market in the wake of legalization. The limited number of production licenses handed out was itself shortage-inducing. Initially, supply was not going to keep up with demand. Crucially, in some provinces, only producers of middle-quality weed have been approved as suppliers by provincial distributors. Rotating strikes by Canadian Union of Postal Workers has also affected delivery.

Frustrated by less-potent product at above-average prices and delivery issues, many connoisseurs just went back to their old suppliers. The black market is still thriving largely in the form of delivery services. In some places, it may soon be poised to be a legitimate private market.

What remains to be done? The first European to smoke tobacco in Europe was thrown in jail for 30 years for being possessed by the devil. When he was freed, he walked into a world where everybody was smoking! There has yet to be a pardon or amnesty of current convicts for marijuana-related, nonviolent crimes. There has also been no mass erasures of previous convictions for cannabis-related offenses.

If Canada is to be on the right side on the Drug War, then nonviolent crimes for cannabis-related offenses must be amnestied, so that victims of prohibition can move on with their lives. Instead, the federal government has left it to individuals to appeal their own cases.