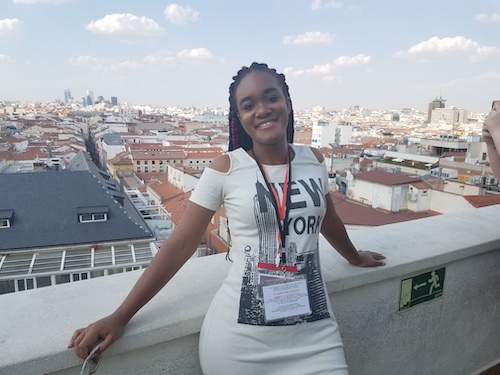 Enjoying the view from Grupo Prisa during an @rgnnacademy site visit. One of our many awesome site visits | Abigail Gittens

Upon arriving in Madrid and looking up to the sky, there were illustrious skyscrapers with glass fronts and magnificent detailing, but this is not what people come to Madrid to see. They visit the historical architecture and spectacular sites that tell you the stories of old Madrid.

While visiting these structures, I wondered who the brilliant minds were that constructed these masterpieces. There is also a mixture of modern versus older art through the talent you see in street art. This article features two of the leading historical sites of Madrid and the beautiful street that cascades off the city’s walls.

The Royal Palace of Madrid is also known as the “Palacio de Oriente.” The reason being it is right next to the tranquil Plaza de Oriente, The palace’s history dates back to 1738 when construction began. The building was inaugurated when King Carlos III established his official residence there in 1764. The site of the Palacio Real was previously occupied by the “Palacio de los Asturias” until it burned down on Christmas Eve, 1734.

The architect Filippo Juvarra was one of the great minds who started the design of the palace. His inspiration came from Italian architect Gian Lorenzo Bernini and the French Baroque palaces.  Architect Giambattista Sacchetti then took over the design process and he brought forward the Baroque design. Finally, in 1760, Francesco Sabatini was summoned to expand the building, and he added a new neoclassical style.

Originally built as the residence of the royal family, it is used today for exclusive receptions, state ceremonies, and official acts, since the King of Spain currently lives in the Palacio de la Zarzuela on the outskirts of the city. 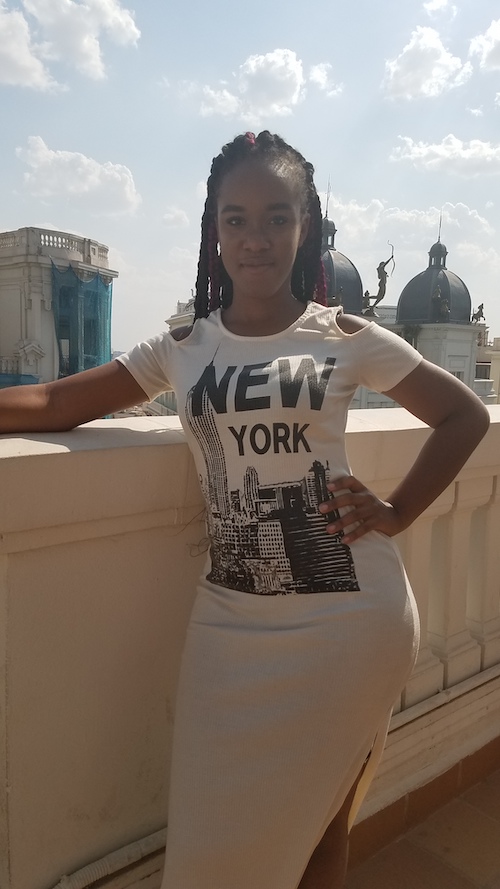 On the exterior of the palace, you can see the magnificent works of those who contributed to the design of this historical masterpiece. The facades are mostly local white and gray stone.

Surrounding the walls of the palace are different Spanish moldings graciously wrapping themselves around the stony architecture. On the palace there are various exquisite statues that contribute to the Italian décor that Juvarra adopted from Lorenzo.

A visitor from the United States, Lisa, stated: “I just love the history and the design of the building, and the area is nice with the garden.”  Standing there at the palace, one can only let their imagination run wild and imagine the important events that have occurred since the 1700’s.

Next to the palace is the Plaza de Oriente, where the locals and tourists come and relax throughout the day to hide from the heat of sun. The rich vegetation provides great shade for hot summer evenings accompanied by a cool breeze. The garden provides a lot of space to enjoy an evening stroll with family and learn about the past nobles and kings of Spain through the different statues that are alongside the paths of the garden.

Alexander from Australia said; “My friends and I are doing a European tour, and we had to come here to see this historical building. Also because the area had a lot of shaded places, we ended up staying a while and relaxing.”

The palace with the garden together is one of the most relaxed and calming places in Madrid and the perfect place to enjoy a cool evening.

Plaza Mayor is beautiful square that is full of history and lovely architecture that tell different stories. The plaza’s origins date back to the reign of King Felipe III. Architect Juan de Herrera started the first plaza and it was completed in 1619. Tragically, it was destroyed by fire in 1631 and was reconstructed by Juan Gómez de Mora. Another fire occurred in 1670, and the plaza was then built anew by Tomás Román, but yet another fire struck the plaza in 1790.  The plaza was then rebuilt by Juan de Villanueva and finished in 1854, and this is the plaza that we know today.

The original name of the plaza was Plaza del Arraba, then Plaza de la Constitución, and then Plaza de la República. At the end of the Spanish Civil War, it was finally given its current name, Plaza Mayor. Throughout the years it has served many purposes. It was used as a market place as well as for hosting events like bullfights, public executions, trials during the Spanish Inquisition, and crowning ceremonies. Stephanie, from Belgium, stated: “It was the first place that our guide recommended, and I love the history of the plaza and the detailed structure of the building.”

Plaza Mayor still boasts its beautiful structure and unique designs that grace the square. Its arched doorways and jagged stone floors tell the history of hundreds of years of architecture. Pez from Tribunal said: “It has a lot of history. It is equivalent to Times Square in New York.”

At the moment different shops and restaurants grace the square with their presence. Not a lot of locals visit Plaza Mayor but it is full of tourists eating at the restaurants and shopping. Eugenia from Peru said: “It has a lot of places to go for dinner, and it is a historical place.”

Plaza Mayor is full of history that dates back to hundreds of years, and it is a must see historical site in Madrid.

Street art is a big part of the city’s character and a lot of people love the portraits on the walls of Madrid. The neighborhoods of Lavapies and Chueca are the best places to go and view street art. A lot of the art portrays the feeling of people, and it gives a sense of color and life to the area. Many may see it as just graffiti, but it is a culture where artists get to express themselves.

The best time to go art viewing is at 10:30pm, as this is when most shops are closed, and these jewels begin to show on the different store front shutters. Vince from New Jersey said, “The colors, the art, the food, and the mix of cultures in Lavapies is tremendous. One of the coolest places in Madrid for sure.”

Most people love the art that is being shown, but some shop owners cannot stand it, because these artists deface their property. Shopkeeper Rahal from Pakistan stated:“ Most of the time the art is good, but as a business owner, I do not like when there’s paint on the doors of my shop.”

People who live in the area stroll about at night and look at all the different art and the meaning behind it. According to Rahim from Pakistan: “My wife and often take walks at night just to see what new portrays of art are in the area of Chueca. We think it is a very creative way [that] artists express themselves.”

Visiting these areas and enjoying the work of these unknown artists is one of the things you must do in Madrid.

Although these buildings are ancient, they have a number of historical stories and have stood the test of time They continue to tell the different stories that give Madrid its history of the past. Also, street art would forever be on the walls of Madrid expressing the feelings of the artist and would continue to be the color of the streets with its unique cultural effects.

Opening hours – it is always open to the public

Fee’s – there are no fees but if you have a question there are many tourist information centers around.

Opening hours – It is always open because the art is on the streets of Madrid. the best time to go art watching is 10:30pm when the stores are closed.

Fees – It is absolutely free