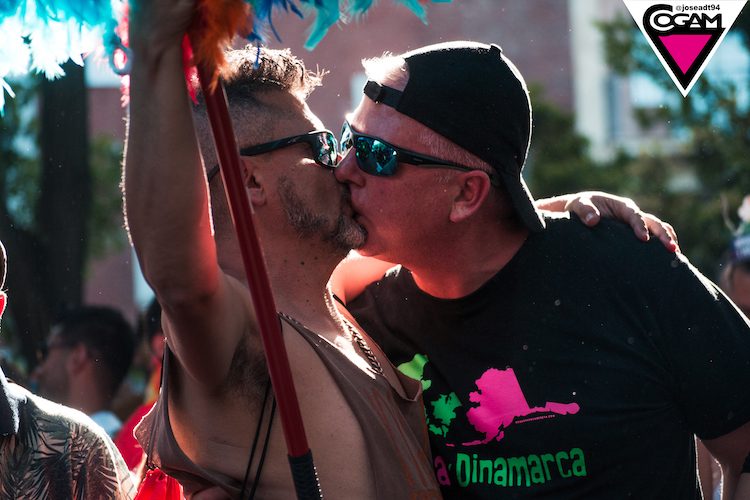 Chueca, the Modern Day Mecca of LGBT Culture in Madrid

The metro stop is a clear giveaway.

From the moment you step onto the platform at Chueca, seven rich, vibrant colors of the rainbow flag illuminate the underground station. And if that doesn’t give a clue that you’re about to enter the mecca of Lesbian, Gay, Bisexual and Transgender (LGBT) culture in Madrid, Spain, the goldmine of LGBT-friendly restaurants, clubs, bars and clothing stores should confirm that initial impression. 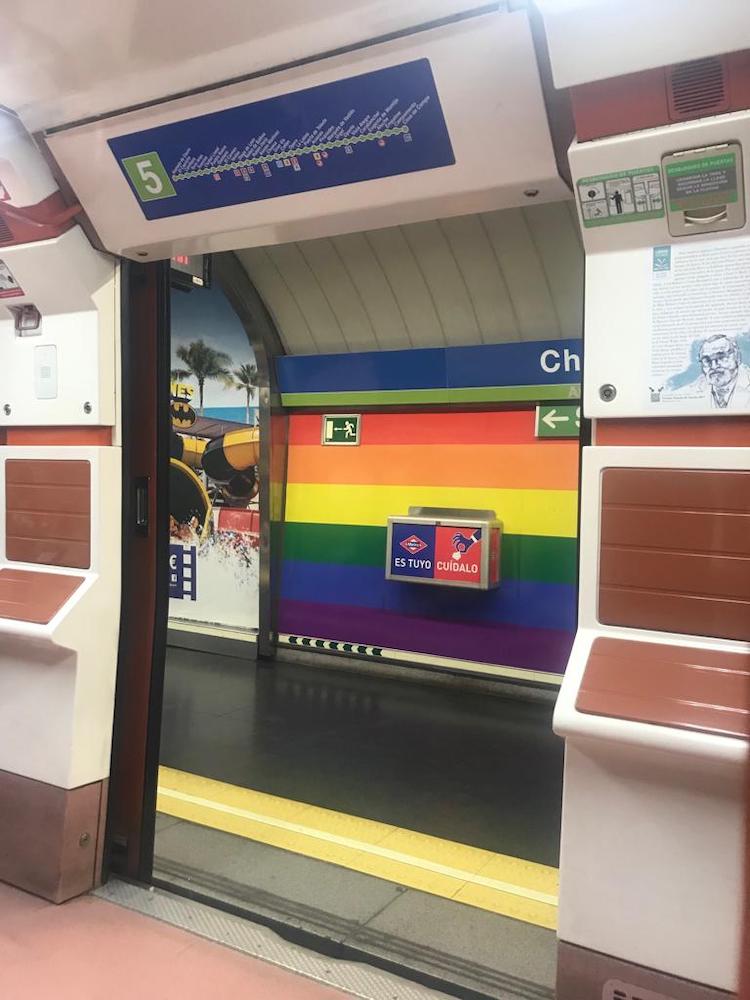 On the streets there are countless rainbow flags draped from wrought iron balconies of late 19th century Spanish buildings and creative stickers with words of encouragement and empowerment such as “Whoever you love Madrid loves you” are posted on many storefronts.

On a recent afternoon, the sun shone brightly as people went about their daily business. By the metro’s entrance a few people loitered and drank, while others sat under large umbrellas as they ate at sidewalk cafés.

As these groups enjoyed their activities, a few same sex couples were seen holding hands as they walked along Calle de Gravina. 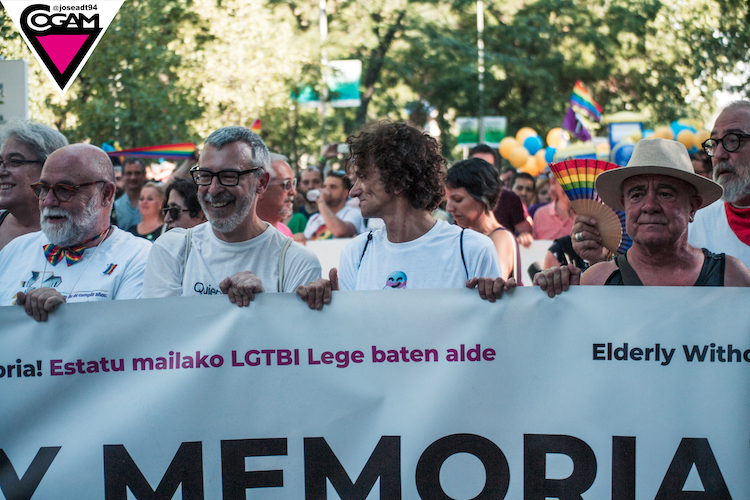 Demonstrators who participated in the Pride celebrations.
(Pictures provided by COGAM) | Tre Greaves

This wouldn’t have been possible 40 years ago, according to Javier Garcia, a volunteer at COGAM, a democratic, non-profit organization which has fought for and advocated human rights.

During an interview at COGAM’s office, Garcia recalled the tough times the community faced during and after the Francisco Franco regime.

Under the General’s leadership, same-sex sexual intercourse was punishable because the 1970 Law on dangerousness and social rehabilitation said that begging, homosexuality, vandalism and drug trafficking were morally and socially dangerous. For their indiscretions some ended up in concentration camps.

Although Franco died in 1975, it took time before improvements were seen.

The first Pride demonstration was held in 1978, where a relatively small group marched for 500 meters from Tirso de Molina (a plaza named after Spanish Baroque dramatist, poet and Roman Catholic monk) to Puerto de Sol, Madrid’s equivalent of Times Square in New York.

After the demonstrations, participants walked to nearby Chueca for drinks. Despite the advancement Garcia said police patrols were frequent especially since skinheads lived there.

Garcia said, “you had to be careful, you couldn’t hold hands and you couldn’t kiss in public because they would hit you. It wasn’t a very safe area, you could be in the bars and suddenly the police arrive and then they’d go ‘shhhh, the police are outside so remain silent.”

“I was 18 and to be honest I was scared because I had heard on the news and people told me what had happened. They would put you in a jail cell for a night,” he said.

This year on July 8, during a highly politically charged parade, 400,000 people took a stance against the far-right political party Vox, which Garcia said are seeking to repeal LGBT rights.

Recently, the party asked for the names of everyone who work for or volunteer at human rights organizations.

In response, the demonstrators walked under the theme No Step Back. They began at the oldest historical city street Paseo del Prado, and stopped at Palacio de Cibeles where the City Hall is located.

“Things were done a bit different because normally we’d walk past the city hall, but in response to their requests, we stopped and chanted ‘No Step Backwards’ because we wanted to make sure they heard us and know that we will not be moved,” he added.

American visitor Ariel Frager, made a similar point. The Portland, Oregon native hadn’t visited in 29 years, and she said she experienced a culture shock.

“I had friends who were gay and when we visited in 1990 everything for them had to be hidden. The clubs were very much underground and it was definitely word-of-mouth. So there were certainly no PRIDE flags flying anywhere, which I was shocked to see,” she said.

Frager admitted the area rivaled her hometown, which is also very accepting of the LGBT community. 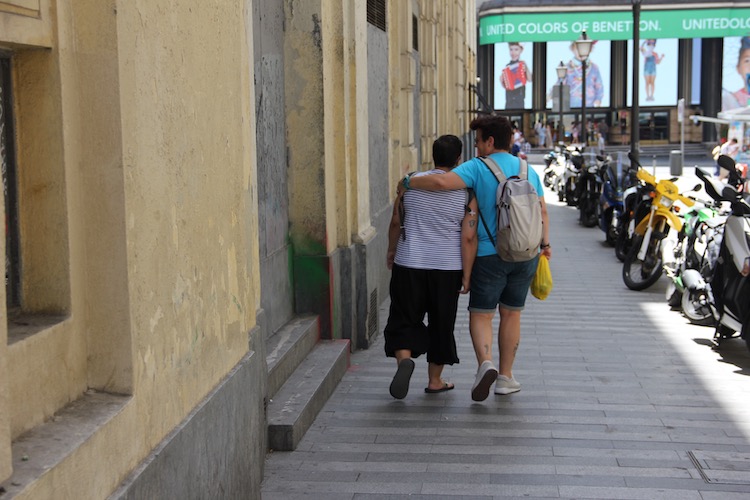 As the neighborhood transformed, so has its price tag. Resident Laura Marcela said that high rents is normal; a one-bedroom apartment between 50 and 60 meters can cost about €1300.

Your typical day could begin with shopping at one of the most recent additions, Mercado De San Anton, a sprawling three-story food hall.

It offers meat, seafood, fruits and vegetables. On the second floor there is a tavern wine bar and ten stalls where customers can taste and purchase Japanese food, seafood, regional Spanish dishes, milkshakes and juices and much more. This floor also boasts of a multipurpose hall entitled Sala Trapezio where cultural events are held.

The Concina de San Anton is located on the third floor and that is where the items purchased on the first floor can be cooked for just €4.

An array of posters featuring models sporting brands such as Andrew Christian, Calvin Klein, and Diesel decorated the store.

Families are also welcomed in Chueca and the young ones are catered for at Ninos, which is located at Augusto Figueroa, 15. The outlet’s racks of colorful suits, t-shirts and trousers almost touch the roof of the small store.

After all of that shopping you can take a trip over to nearby Takomama, a new bar and restaurant specializing in Mexican food, one of their best selling products are €1 tacos.

Takomama server Christian Gomes said they were only there for four weeks but said they were doing good business especially during the evening and at night.

“At our other location at the Príncipe Pío shopping centre it’s less busy during the weekdays, but here in Chueca there is a steady crowd. It’s 50-50 because we see a lot of gay couples and families,” Gomes said.

Just as there is a lot to do during the day, there is no shortage of things to do at night.  At Black and White, a longstanding club which is open every day, patrons can get in for just €10 on some nights. That gets you a free shot and complimentary drink. This two-storey Libertad spot has a live drag queen show and plays a cross section of pop, house, commercial, electro, techno, reggaeton and salsa music.

LL Bar, is another hotspot for nightlife with its assortment of drinks, food, and entertainment provided by drag queens and strippers. LL may leave something to the imagination but Boyberry pushes the envelope a bit more.

A group of young clean-cut bartenders serve the drinks and anyone looking to do more than chat in the lounge area, can drift to the back for a more intimate experience. The services offered there are offered separately.

As an incredible night in Chueca comes to an end around 5 a.m. some converge on the streets where they talk, while others order a cab home or wait until the Metro reopens at 6 a.m.