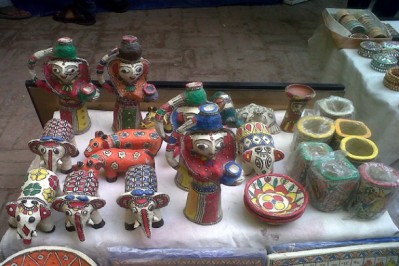 DELHI, INDIA. In India, the word ‘haat’ traditionally refers to a weekly market, usually in a rural environment, but also in some cases in an urban area. Over time, however, the customary weekly markets have become permanent, as is the case with Dilli haat in Delhi.

An open-air village that includes a food plaza, Dilli haat was established so that craftsmen from across the nation could sell their goods. Instead of being restricted to their towns and villages, they could now offer their products to both Indian and foreign customers, eliminating the middlemen usually involved in such transactions. Once you’re inside (the market is open to the public for a one-time entrance fee of 20 Indian rupees), authentic ethnic wares can thus be purchased at low prices.

While the market itself is permanent, within it, the stands may vary; while some are present all year, others rotate, usually on a two-week basis. Together, they endow the market with a village look. That is, architecturally speaking, the stands are small thatched roof cottages interspaced by stone pavements and surrounded by flowering shrubs, trees, and grass. As such, the entire complex remains in harmony with nature.

At first sight, the Dilli haat emanate the air of a village market. But in fact, it suits all contemporary needs in terms of food and entertainment. You’ll find Indian art and heritage, presented in the form of crafts, cuisine and cultural activities. Be it momos from Sikkim, kebabs from Jammu, Gujarati dhokla or the Bengali fish; you can savour them all in an eco-friendly manner. There is even an open air stage for musical and dance shows.

Overall, the Dilli haat is not just a market place, but a showpiece of traditional culture from all over the country. In the heart of Delhi and easily accessible by metro, the market is artistic, recreational and natural: a forum where rural life and folk art are brought closer to their urban demand.