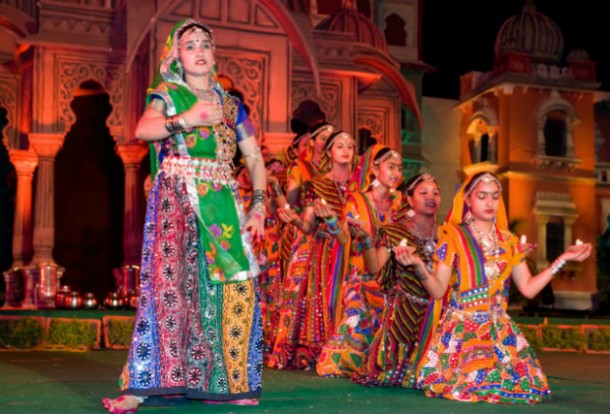 “Navratri,” literally meaning “nine nights”, is one of most popular festivals in Gujarat. Dedicated to the Goddess Ambaji, the festival takes on different forms throughout India, but without a doubt, one of the most colorful versions is celebrated in Gujarat.

The exact dates of the festival vary as they are determined by the lunar calendar but the essence of the Navratri celebration, however, remains from year to year.

Before the festival begins, the children in the local area form groups in an open space, also known as chowk. Using clay, bricks and other materials, the children start building a replica of Mt. Gabbar, where the Ambaji temple, the home of Goddess Amba, is located.

Throughout the celebration, the chowk becomes a public space for people to gather and worship. Participants bring along lights and other glittery objects, and there even exists a sense of competition; every person tries to bring brighter, better objects than his or her neighbour.

Together, they perform the sacred Aarti prayer, after which the Prasad, or sacred food, is distributed among the devotees. Such sacred food can include anything from sugar candy to bananas.

Each devotee is then blessed by moving his or her hand over a flame and then over his or her head. Subsequently, the devotee brings his or her hands together, thanking the Gods for the blessings received.

The most well-known part of the festival is the Garba. Commonly known as a Hindu dance, the word “Garba” actually signifies “clay pot carrying the sacred flame”.

In traditional versions of the festival, a singer would accompany a group of musicians while devotees would perform the Garba around the sacred flame. Nowadays, however, Dj’s, mp3 and Bollywood songs have left their mark on the Garba dance, though the majority of people still prefer live singers as opposed to playbacks.

Costumes, too, get better by the year. In fact, Gujarat’s inhabitants are known to spend thousands of rupees on their outfits – one for each of the nine nights, of course. Among the most popular costumes are the Kediya for the boys and the backless Chaniya Choli among the girls. Competition for the best costume grows year by year for nine whole days, and if you’re ever in town, see for yourself.