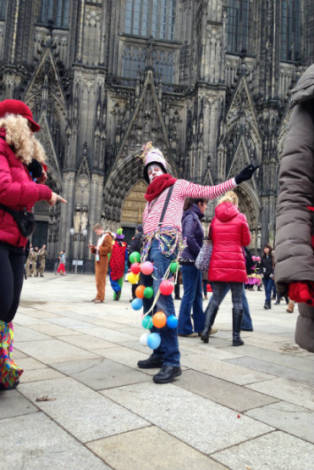 Cologne Gets Ready to Start Its Carnival

COLOGNE, GERMANY. The word “carnival” is associated with visions of street parades, laughter, fun, music and dance. Cases in point: the Brazilian carnival in Rio, “Carnevale” in Venice or “Mardi Gras” in New Orleans.

Germany, stereotypically notorious for the serious nature of its inhabitants, might not be the first to come to mind. But in fact, the country is home to one of the largest carnival celebrations in the world.

In Cologne, a city in the state of North-Rhine Westphalia in Western Germany, carnival, also known as the “5th season,” begins on November 11th at 11.11 a.m.

Tradition has it to cry “Kölle Alaaf,” a phrase that historically meant “cheers!” The phrase maintains its historic meaning as Cologne’s breweries continue to brew the local beer, also known as Kölsch.

But whether it be folk tunes or modern carnival hits, they don’t end today. The carnival season continues until springtime, reaching a climax during what is coloquially known as the “crazy days,” a 7-day perioud from Fat Thursday until Ash Wednesday.

On the first day (Thursday), ladies take the center stage; affectionately known as “Weiberfastnacht,” or “Women’s Carnival Day,” females dress, regardless of whether they’re going to work in the morning, or to a costume ball in the evening. Again, celebrations being at 11.11 a.m. in central downtown.

Celebrations continue throughout the weekend, culminating on Monday with the Rosenmontagszug, or Rose Monday Parade, where community groups walk through the streets throwing candy and gifts into the crowds for well over four or five hours. Spirits are high, and the Kölsch is most certainly flowing. 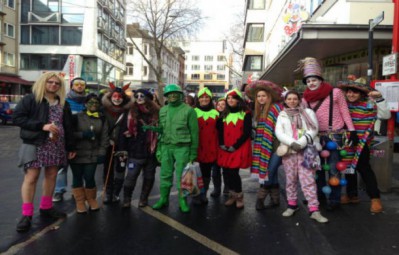 Group of friends ready to start the Cologne ‘Karneval’

Overall, carnival in Cologne epitomizes the atmosphere of a city known to be the “most southerly” in Northern Germany. Despite its strict Catholic history, Cologne, Cologne is a multi-cultural and known to be very tolerant and accepting. In fact, the city’s own constitution is comprised of 11 “laws,” each one of them further demonstrating Cologne’s tolerant and relaxed nature. The most cited of the laws, “Et es wie et es” and “et kütt wie et kütt” (it is how it is, whatever happens happens), reiterate the importance of accepting the situations we find ourselves in.

With that philosophy in mind, should you find yourself in Cologne during the fifth season, roll with it, throw on your wackiest costume, knock back a Kölsch and enjoy it. Soon enough you’ll be a Kölsche Jung or Mädsche too, singing along to hits by Höhner and Brings, finding yourself very at home in the city that can only be described as a feeling, as the local lyrics go: