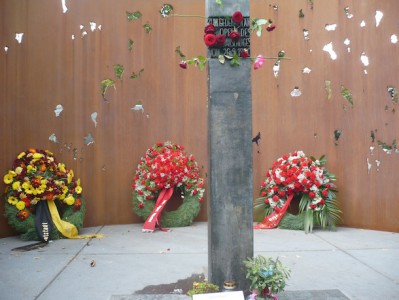 Monument commemorating the victims of the 1980 Oktoberfest terrorist attack | Muenhi

GERMANY. Germany’s Federal President Joachim Gauck opened the recent Munich Security Conference (MSC50) with what has been termed a historic speech, outlining the future of the country’s foreign policy. His characterization of a “good Germany,” the “best Germany we have ever had,” made the news worldwide.

As the most powerful economy in Europe, and the fourth largest economy worldwide, Germany occupies a key position, both economically and politically. The nation has come a long way since World War II, and should now assume a more assertive role in its external relations, Gauck argued, and was later echoed by Ursula von der Leyen, who in 2013 became Germany’s first woman to hold the position of Federal Minister of Defense.

But with all this talk about a “good” and “more assertive” Germany, the country’s internal issues should still be kept in mind.

Flashback to September 26th, 1980. In Munich, the capital of Bavaria, the Oktoberfest is in full swing, when a terrorist attack kills 13 people and injures over 200 others. A bomb explodes precisely at the main entrance to the fairground. The largest terrorist act in the history of Germany, in fact.

The recently released film Der Blinde Fleck brings such domestic issues back to the forefront. Directed by Daniel Harrich and based on a true story, Der Blinde Fleck, meaning “the blind spot,” narrates the life’s work of journalist Ulrich Chaussy, who began investigating the assassinations in 1980.

What results is a tumultuous chronicle as Chaussy is confronted with a corrupt administration, alongside a hypocritical media. Freedom of expression is put to the test, journalists are bribed by those in power, but few people know the truth behind the skewed newspaper reports.

The police and the politicians in particular dismiss the attack as having been committed by a single terrorist. Any connection to the Wehrsportgruppe Hoffmann, Germany’s largest active right extremist group, is quickly ruled out. The murders were the work of an Einzeltäter, meaning a single terrorist: the easiest theory to appease a panicking public, especially when pending elections are involved. And not to forget, the Oktoberfest is a carnival-like outlet; why marr future visitors’ craving for pleasure with the remembrance of death and terror?

The story is more complex than it would seem, and to this date, the case, according to Chaussy, has not been solved.

Already in 2009, Chaussy asked for the case to be reconsidered since DNA analyses had in the meantime become available. What a coincidence: Chaussy was informed that the court exhibits had been eliminated by then; the Public Prosecutor General of the Federal Court of Justice had considered the case closed.

But not for Chaussy and Harrich. Their film premiered at the Munich Filmfest in 2013, and they are now presenting it at cinemas, especially in Bavaria, to re-open the debate about what really happened back then.

Most recently, they attended a screening at Munich’s Monopol Kino on February 3rd, 2014. Survivors and other affected people flock to the viewings, walking up to Chaussy after the screenings to further debate their stories, adding information to, and gaining deeper insights into, his investigative file.

Meanwhile, in comments on film analyses of local newspapers, people argue that they thought this topic had long been closed. The story told was the story people believed, and put ad acta. Other, especially younger viewers, say that they knew very little about the Oktoberfest occurrences at all, in contrast to the Rote Armee Fraktion, or RAF in short, a left extremist terror group. Among a group of 15-18 year-olds surveyed by Chaussy, most raised their hand when asked if they knew about RAF, while almost no hands went up when inquiring about the Oktoberfest attack.

The silence kept, according to Chaussy, is similar to the network of people behind the Nationalsozialistische Untergrund, or NSU. A series of murders from the year 2000 onwards has been attributed to the NSU, a right extremist group said to consist of up to 200 members.

Döner-Morde, the NSU murders were first termed; foreign victims were said to have been assassinated by fellow foreigners. Not Einzeltäter, not single terrorists, but again, not German (Neonazi) perpetrators. History repeats itself; in both cases, the true guilty, and the network behind them, were not initially identified.

Any political science student would be quick to argue that one should not mix apples with oranges: international relations are not to be confused with domestic ones.

Sure, but neither should the emphasis on Germany’s future foreign policy undermine the domestic issues that still need to be resolved. The Oktoberfest terrorist attack, and the NSU assassinations and subsequent lawsuit conducted against Beate Zschäpe, a presumed member of this right-wing extremist group, which has been going on for months, are just two cases still open.

After all, Gauck’s speech was about a “good Germany,” not a “perfect Germany.” He specifically questioned the opinion of those who deem the nation as immaculate, those who ask: Warum reparieren, was nicht kaputt ist? Why repair that which is not broken?

It is films like Der Blinde Fleck that raise awareness about Germany’s imperfections, provoking critical reactions among viewers, re-opening criminal investigations, and re-evaluating the role of the media.

Cultural catalysts, acting in favor of democracy, a work ever-more in progress. But the film also asks: When are those who could help uncover crimes such as the 1980 Oktoberfest attack ready to speak out? Are the politicians truly ready to follow in the footsteps of these catalysts, to unveil the secrets of the past, and of the present? To pave the way for a better Germany, the Germany that they themselves aspire to?