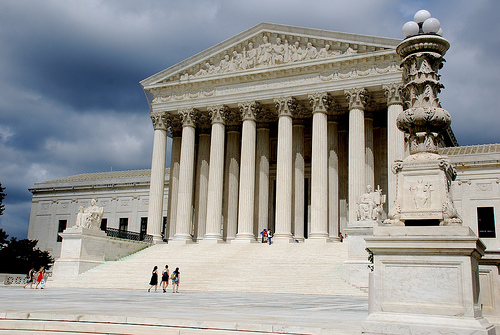 U.S.A. McCutcheon v. FEC could prove to be a landmark case in the debate surrounding money’s influence on American politics. The case was brought forward by wealthy conservative businessman, Shaun McCutheon, who argued that limits on how much he could give political candidates per election cycle was a violation of his First Amendment rights, the Republican National Committee agreed and assisted him in bringing his case to the Supreme Court.

The ruling comes not even five years after the 2010 case, Citizens United v. FEC which allowed for corporations and unions to spend unlimited amounts of money on political advertising attacking or supporting candidates. The Citizens United case is important on the issue of campaign finance and critics have argued the ruling effectively opened the floodgates for money to pour into the American political system.

This raises a very important question about whether or not money is equal to free speech. If money is equal to free speech then it follows that those with the most money will be heard over the rest. If one were to look at how much time is being spent on reducing regulations on finance—by reducing the tax burden of the richest in society whilst imposing austerity measures on the rest of the country—it becomes abundantly clear that the influence of big money on politics is vast.

The McCutcheon v. FEC ruling goes even further than Citizens United, lifting what little restrictions there were in the first place. This means that wealthy donors can exert greater influence on political candidates through direct contributions. This is part of a troubling trend of legalized bribery in the American political system, and critics are worried that lifting these restrictions could lead to a removal of all campaign finance limits.

Regulations on campaign finance are essential: they have to be in place in order to protect the many from the potentially damaging behavior of the few. If the trend to roll back these regulations continues, it could turn America into a de facto oligarchy, where the majority will have less and less influence on their elected officials. The idea that a country where the rich already have a very loud voice would give them an even louder one is delusional and anti-democratic.

There are ways by which the flow of money can be stemmed, not least through publicly financed elections. Speaking at the League of Women voters in April 2012, former counsel for the Brennan Centre for Justice Mimi Marziani made an excellent case for this which could make a massive difference in the role money plays in American politics. Furthermore there is also Wolf-PAC, a political action committee calling for a constitutional amendment which would, among other things, publicly finance elections. This is vital for the long term preservation of the United States as a viable democratic country.

Those who argue in support for rulings such as McCutcheon and Citizens United tend to ignore the increasing influence of big money donors in the American political system. In doing so they are either being incredibly disingenuous or unbelievably naive. It is disingenuous to claim that those who make contributions, particularly big businesses, don’t expect any return on their investment. It is naive to think that money has little or no influence on the decisions of politicians. If representative democracy is ever going to truly work in America, then the corrupting influence of money on its democratic system must be removed. Democracy should not be manipulated by the wills and interests of the wealthiest in society.