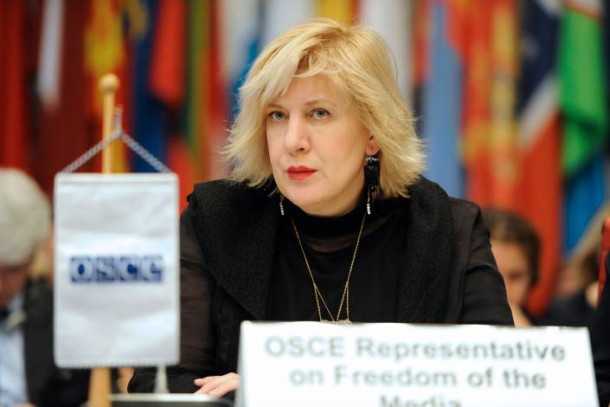 OSCE Representative on Freedom of the Media Dunja Mijatović, at the Permanent Council in Vienna, 16 January 2014 | OSCE

Can we talk about an open democracy without freedom of the media? Freedom of the press is the right of an individual to report facts without bias on every field of society. The people’s right to their own opinions is also ensured by nearly all democratic constitutions based on international agreements. The Universal Declaration of Human Rights adopted by the United Nations on December 10, 1948 guarantees, in Article 19, that “Everyone has the right to freedom of opinion and expression; this right includes freedom to hold opinions without interference.” Article 10 of the European Convention on Human Rights states, “Everyone has the right to freedom of expression. This right shall include freedom to hold opinions and to receive and impart information and ideas without interference by public authority and regardless of frontiers.” The European Convention is applicable in all 47 Council of Europe member states dating back to 1953.

Press background shows a direct link between its credibility, rating and long-standing media business models in a democratic environment. Even so, some press companies’ strategies for surviving against their competitors are led in the opposite direction. Self-censorship is caused by ignorance or fear of publishing interesting but not top-selling stories, illegal practices of intrusion of privacy or yielding to political pressure, to name a few. Finally, audiences influence the news through media credibility ratings, and the company’s attention to these audiences ensures whether their news sells or not.

The press community is supported by a range of institutions committed to media freedom. The Organization for Security and Co-operation in Europe (OSCE) is a regional umbrella for freedom of expression, which includes freedom of the media. “The OSCE participating States consider freedom of expression a fundamental and internationally recognized human right and a basic component of a democratic society.”

In an exclusive interview, ROOSTERGNN spoke to the OSCE Representative on Freedom of the Media, Dunja Mijatović, about the fight of journalists and restrictions on media freedom in several European countries. Specifically, the interview also speaks to the solutions the OSCE has proposed in times when official signals have failed to show any progress.

How does the OSCE Representative on Freedom of the Media help European states to promote freedom?

My office is tasked to monitor media freedom developments in all 57 OSCE participating States, spanning the entire northern hemisphere. We assume an early-warning function on media freedom violations in the OSCE region and intervene on breaches of the OSCE commitments with regards to free media and free speech. We work closely with the participating States and we recommend corrective action where appropriate.

Apart from directly raising these and other media freedom issues with participating States, we also strive to put freedom of expression and freedom of the media high on the agenda of relevant parties by organizing conferences and events, performing legal reviews and public outreach.

Why are freedom of the press and freedom of expression under serious threat in Turkey? What should officials do to ensure freedom?

The legislation governing media freedom remains very restrictive in Turkey. Several laws can curb, and in some cases even silence critical media in the country, and they are being implemented by the courts on a regular basis.

The most dangerous of these pieces of legislation are the Anti-Terror Law and certain provisions of the Criminal Code. In order to protect and encourage free expression and the free flow of information, the authorities should immediately reform these laws.

I am also concerned by recent prosecutions against social media users for expressing opinions that remain well within the boundaries of freedom of expression. Among the 57 participating States of the OSCE, Turkey remains the country with the highest number of jailed journalists and the highest number of blocked websites. This runs against OSCE commitments on freedom of expression and the free flow of information. My Office works regularly and closely with the Turkish authorities and I hope that Turkey will accept our assistance in carrying out these much needed reforms.

You have sent a clear signal to Ukrainian authorities over the deterioration of media freedom. What are the steps towards becoming an independent press?

Let me first say that the media freedom environment in Ukraine is very fragile. The situation has deteriorated rapidly the past couple of months, with repeated attacks on and mistreatment of members of the media in eastern and southern Ukraine. There have been over 300 attacks on journalists already and four journalists have been killed while covering the events in the country since November last year.

There are a number of steps that have to be taken to improve the media freedom situation in Ukraine. But first and foremost, the issue of journalists’ safety has to be dealt with rapidly and thoroughly. Measures have to be initiated to ensure that members of the media can do their job in a free and safe manner.

You have expressed your concern about the violence and intimidation by police against Spanish journalists who covered a recent protest in Madrid. Do you have any message for the freedom of media in Spain?

More than 30 years after the approval of a democratic constitution in Spain, the country has been able to establish a solid system for the protection of fundamental rights, including freedom of expression and freedom of the media. However, I have already expressed some concerns about the lack of a good and effective legal framework to protect and promote the right to access to information by citizens and journalists.

Further, as the economic crisis has hit Spain in a particular harsh way (including media outlets) I have noted with concern the deterioration of labour conditions for journalists. I have also expressed my concern about law enforcement agencies’ treatment of members of the media during recent demonstration and protests in Spain.

How do you rank Greece’s media freedom?

My office does not rank countries with regard to their media freedom records. Instead we assess whether a country respects and implements the OSCE commitments they undertook to protect in the field of media freedom and free expression.

In Greece we face various problems with media freedom: intimidation of journalists covering public events, including protests, has been of great concern. I have also followed in detail the harassment of investigative journalist Kostas Vaxevanis. Recently I noted with concern examples of social media users being charged with blasphemy, which can carry a prison sentence. I continue to urge for the decriminalization of speech offenses, and also for the reform of laws governing minority media.

Bulgaria is placed last in the top of Europe’s freest press and on 100th position in the world, according to Reporters without Borders NGO. Do Bulgarians need more laws on freedom of the media or are not these respected by authorities?

In case there are media freedom deficiencies, more often than not they can’t be solved by passing more laws.  I find it more important to urge the participating States to respect the international commitments they made, and govern their media freedom in a spirit which is in line with international standards on freedom of expression.

In Bulgaria it is worrisome to note the frequency of intimidation of journalists for their work. Just to give a few examples, in half a year television journalist Genka Shikerova saw her car set on fire twice, and thus far both cases remain without prosecution. Last year we also saw the intimidation of journalists by members of the Ataka Party, and I urged the authorities to ensure that such behaviour is not tolerated. I continue to call on the authorities to successfully investigate all cases of attacks against journalists, in order to send a message to society that violence against journalists is not tolerated.

Do you think Romania has made improvements of freedom of the press since your last call for decriminalization of insult and libel?

I do not see an improved media freedom situation in Romania. Only last December the authorities introduced amendments that would re-criminalize defamation, in spite of the fact that the amendments had been widely criticized by civil society for their potential chilling effect on the media, and in spite of international standards pointing towards the need to decriminalize speech offenses.

I called on Parliament to reconsider the amendments in order to ensure that journalists are able to report on issues of public interest without fear of criminal charges. I was pleased to see that the new Criminal Code, which went into effect on 1 February, contained no provisions regarding “crimes against human dignity,” but this we cannot evaluate as improvement of media freedom in the country.

What would be an example of completely free press European country?

Again, my office does not rank countries with regards to their media freedom records.

The OSCE Representative on Freedom of the Media, Dunja Mijatović, from Bosnia and Herzegovina, took over this post on 11 March 2010. Mijatović is one of the founders of the Communications Regulatory Agency of Bosnia and Herzegovina. In 2007 she was elected Chair of the European Platform of Regulatory Agencies. Prior to this, she chaired the Council of Europe’s Group of Specialists on freedom of expression and information in times of crisis. Mijatović is an expert in human rights; communications and media strategy; and regulatory and policy media framework. She has extensive knowledge of institution-building in transition states and many years’ experience of issues related to journalist’s safety and new technologies, with the emphasis on digitalization, convergence and Internet technologies.