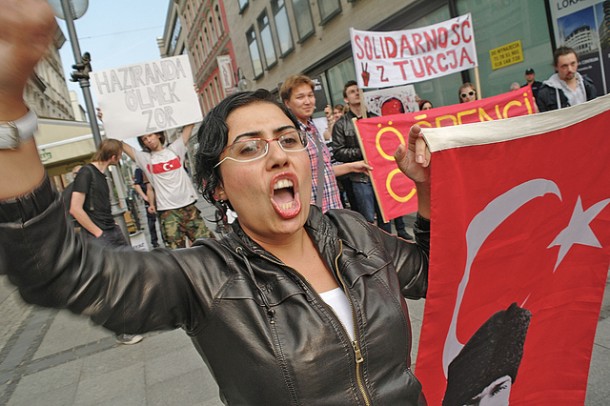 Freedom of expression in Turkey is deteriorating. At the end of 2013, Turkey had the highest number of journalists in prison anywhere in the world. It is also becoming increasingly draconian in its treatment of social media: earlier this year it tried to block social media messaging sites and submits regular requests for social media sites to remove content. In late March, Turkish authorities imposed a ban on Youtube – which was lifted earlier this month – soon after recordings alleging official corruption were aired on the site. Journalists report a climate of intimidation and fear.

In an exclusive interview, ROOSTERGNN spoke with Jodie Ginsberg, CEO of Index on Censorship, about the current situation.

In general, given its important role in today’s society, do you believe that the internet is HELPING to improve freedom of expression policies in lesser developed countries?

There is a mixed picture in terms of the way in which internet is being used in all countries. It is allowing some people the opportunity to express themselves more freely because it allows the opportunity for citizen journalism, and other forms of personal expression, but access remains a barrier and many countries are increasing their censorship of the internet as it becomes more widely used.

How do you think the current digital restrictions in Turkey are affecting the countries’ citizens and in particular its journalists/reporters/artists?

Digital restrictions are directly and indirectly censoring free expression in Turkey. For example, a Turkish court gave pianist and composer Fazil Say a 10-month suspended jail sentence for blasphemy and inciting hatred over a series of comments he made on Twitter last year. Other journalists have been fired from their jobs for criticising government policies. This creates a climate of fear that means other writers and artists self-censor out of concern they risk falling foul of authorities.

How valid do you judge the Turkish government’s claim that its recent internet restrictions are solely a fight against pornography and violence?

Given that many of those targeted by these restrictions write about politics, it is difficult to see how the government’s actions can be described as solely targeted at those inciting violence or involved in pornography.

Despite the digital restrictions, do you think that free speech is improving in Turkey?

No, the situation for free speech is deteriorating in Turkey. At a recent Index on Censorship event, a leading journalist and a legal activist both described their pessimism about the environment for free expression.

How can the rest of the EU help to change the situation in Turkey?

The EU can continue to voice its opposition through diplomatic channels to free expression restrictions and it should use the upcoming Internet Governance Forum in Istanbul to make public its dissatisfaction with recent moves to curb free expression.

What can other countries learn from this kind of policy implementation in terms of their own digital freedom regulations?

Digital freedom needs to be embedded in the legal system. A process such as that used by Brazil in formulating its Marco Civil policy on the internet is a useful model.

Jodie Ginsberg is a former Reuters UK and Ireland bureau chief and was appointed the CEO at Index on Censorship earlier this year. Index on Censorship is an international charitable organisation that campaigns for freedom of expression around the world.