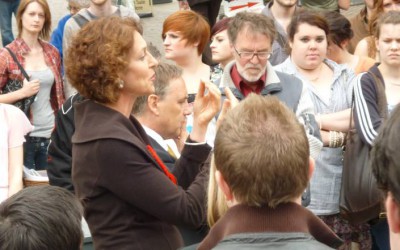 SERIES: Freedom of Expression | Our Rights Are Like Muscles

Freedom of expression is a concern that is often raised by journalists and writers in the context of political injustice in authoritarian regimes or ground breaking revelations, such as the Snowden case. However, this universal human right applies to everyone – it is not only the voices of high profile journalists and activists that deserve to be heard. Speaker’s Corner Trust is one of a number of registered charities that promote ‘free expression, public debate and active citizenship’, working primarily within the UK but also abroad in countries such as Nigeria, aiming to encourage communities and individuals to voice their opinions and stand up for their beliefs. In an interview with ROOSTERGNN,Peter Bradley, the co-founder and director of the Speakers’ Corner Trust,highlights the importance of engagement and communication within developed societies.

How does Speakers’ Corner Trust promote freedom of expression?

Our aim is to promote free speech, open debate and active citizenship. We do so through a number of educational and other programmes but our focus has been on creating a network of local projects in the UK as well as developing a national initiative in Nigeria which is now run by a sister organisation in Abuja. The success of all these projects, which are managed by committees of local volunteers which SCT helps establish, has been based on their capacity to harness the ideas, energy, goodwill and voluntary commitment which can be found in every community. The Committees’ work often includes establishing Speakers’ Corners in public spaces as symbols of citizens’ rights, focuses for civic identity and platforms for public engagement. But at the heart of each initiative lies a programme of events designed to reach every sector of the local community. They could include debates led by voluntary groups, consultations mounted by public services or discussions stimulated by academics or campaigners on subjects from the global to the national, local and cultural. Others simply provide a platform for people to express their views and opinions on issues important to them. The central principle in all these events is that they should be accessible to all, strictly non-partisan and non-adversarial, welcome diversity and seek to inform opinion, identify common ground – and, where possible, entertain.

In our everyday lives what can we do to ensure that we support and commit to freedom of expression?

In developed democracies like the UK, I think we’re often in danger of taking our freedoms for granted. We forget how hard-won and precious they are and how millions of people the world over are struggling for the rights that we may now be neglecting. But a true state of democracy does not exist simply because civil liberties are protected by law. Rights are like muscles: if they are not exercised, they become weak and ineffectual. So our liberties are not just entitlements but also a constant challenge to us to fulfil our responsibility as citizens. After all, democracy is not owned by the politicians we elect; it’s only as good as we collectively make it. Our emphasis on face-to-face engagement distinguishes what we do from other initiatives promoting participation online. We believe that citizens coming together to exchange of ideas, information and opinions – with each other as well as with the decision-takers among them – is a key to building trust and participation in governance and to strengthening the mutual respect and common purpose which underpin vibrant, cohesive communities. Real engagement has to start at a very local level. Until neighbours are talking to neighbours about the issues that matter to them, why would they want to discuss them with politicians?

I think of the UK as almost a post-democratic society. Previous generations understood far better the need for common purpose and cooperation. Now the focus is on individual rather than collective interests and rights. As a consequence, more and more people are becoming disillusioned with politics and cynical about the democratic system and I think that’s not only largely unjustified but also dangerous. I also believe that we won’t rehabilitate politics until we restore citizenship. The first step is to get people to start communicating with each other again face to face – literally coming back down the garden path to talk to each other. We’re not a campaigning organisation and would not want to create dangers for people we might work with in countries where free expression is not permitted. But we have developed a national Speakers’ Corner initiative in Nigeria where platforms for expression, debate and consensus-building are urgently needed if the fragile democracy in that wonderful but troubled country is to overcome the challenges it faces and eventually prosper. It’s run independently by Nigerians for Nigerians and doing some very good work in often challenging conditions.

How have Speakers’ Corners changed a community?

I hope that at least some Speakers’ Corner events lead to greater public influence on local decision-making and increased confidence in the democratic process; some may inspire practical community action; others may help improve understanding between or within communities. Some may simply be personally enriching. I wouldn’t want to make extravagant claims. But I hope that we’ve made a modest contribution. Certainly wherever we’ve introduced projects we’ve had an enthusiastic welcome from people who intuitively recognise the need for what we’re doing. It’s really good to see how the projects we help set up are sustained by volunteers long after we’ve gone.

What is a particularly memorable moment that you’ve experienced at a Speakers’ Corner?

I remember a man in his nineties speaking passionately at Lincoln Speakers’ Corner about the need to bring British troops back from Afghanistan. He then added that the Parliament should pass a law requiring pedestrians to keep to the left to avoid collisions on pavements. It was a very humanising moment!

What are the future plans of the Speakers’ Corner Trust?

We’re a very small organisation and sadly we have very little funding. But we’ll keep doing our best as long as we can!

Peter Bradley is Director of Speakers’ Corner Trust, a charity which promotes free expression, public debate and active citizenship as a means of stimulating civil society in the UK and supporting its development in emerging democracies. He is a former Labour Member of Parliament and a regular lecturer and contributor to the press and media.