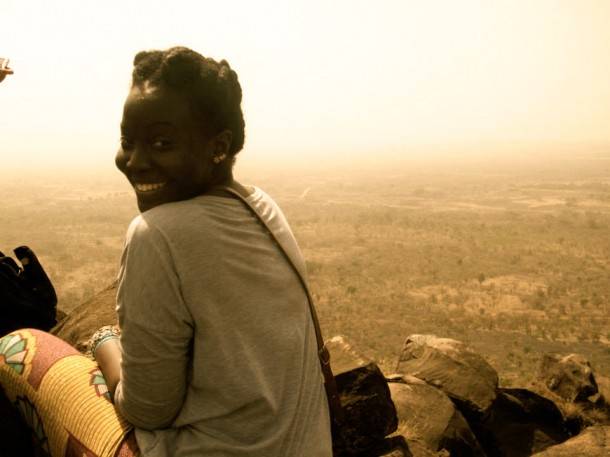 Dakaroise [adj]: referring to a female resident of Dakar, Senegal. Who exactly is the “Dakaroise”? Is it even possible to categorize such a wide spectrum of uniqueness with one label? For a time, I tried to blend in with these women, with varying levels of success depending on the day.

If you’ve ever visited Dakar, you’re probably familiar with the glamorous slim figure sweeping down the street in a cloud of perfume. Never a hair out of place, maybe fingertips stained red with henna, and an amazing knack for not sinking into the ubiquitous sand even in high-heeled sandals. I was totally disabused of the notion that Monday morning classes meant that I could roll out of bed and stroll to school in jeans and a T-shirt.

I would be doing Dakaroise women an immense disservice if I focused only on the veneer of glamour clinging to their physical appearance. These are women who are navigating a complex post-colonial society, juggling seemingly mundane obligations of making ends meet and caring for loved ones with broader systemic issues of women’s empowerment and societal expectations constantly weighing on their shoulders. Alright, you might think, isn’t that exact situation faced by millions of women worldwide? Sorry, mon ami*, it’s not that simple.

In my understanding, these women are planted at the crossroads of several conflicting socio-political forces. Imagine a formerly matrilineal society, forced to overturn its gender roles and expectations as one of the many machinations of French control and assimilation. Factor in the arrival of Islam, a few hundred years before the Europeans, a religion so entrenched in Senegalese identity that it is often conflated with that vague idea we like to call “African tradition”. Then there is the steely resolve of Senegalese women to claim their rightful and undeniably powerful role in a society that still counts in its number many individuals who firmly believe that women should be seen and not heard. You must also take note of the other elements of personal and group identity coming into play- polygamous, poor, Christian, educated, monogamous, wealthy. Don’t forget lesbians, who may arguably be amongst the most marginalized group next to those of low socio-economic status. After all, there is a law forbidding “acts against nature”, an attack on homosexuality, but none against being poor. Is this too complicated? Exactly!

Still, the Dakaroise forges her way into public spaces. Women are ministers, teachers, doctors and engineers, but they are also caretakers and pillars of the home. I think in the Western conception of feminism, the public and domestic spheres have formed this strange binary that relies on the premise of the domestic being inferior and inhibitory of a woman’s realization of her potential. My host mother was just one of many examples of women who trampled this binary under their tired feet, the first ones in the car rapides** before sunrise, and the ones still standing after long days of directing subordinates and keeping order amongst unruly students.

One blog post would definitely not be sufficient to spin a replica of the complicated web that is the “Dakaroise” identity. Neither do I intend to make martyrs of Senegalese women, for that would suggest that they are all symbols of feminism and the struggle for gender inequality. That would be false, and would be putting unnecessary pressure on the backs of people who generally have a lot of pressing issues to contend with.

Being mistaken for Senegalese was an honor I wore gladly for the most part, apart from when it came with the caveat that I wasn’t allowed to do anything that could be seen as socially reprehensible. Who wouldn’t want to belong to this sisterhood of strength and resolution even in the face of opponents who are determined to keep your head bowed and eyes downcast? Zoé “la Sénégalaise***”? Sure, avec plaisir****!