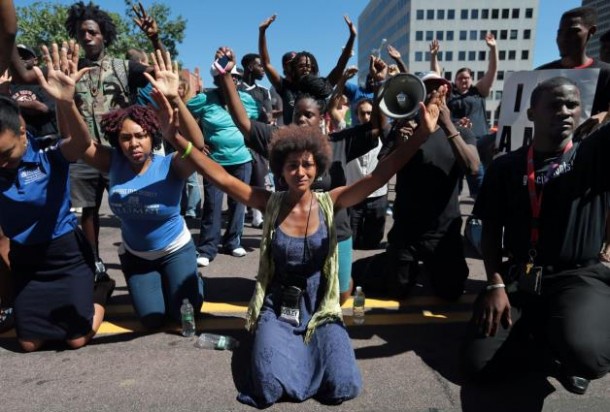 U.S.A. The Modern Civil Rights Movement is in now full fledge; the movement itself has been brewing under the surface for a while now. With plenty of scenarios to cite as examples of bias, prejudice and discrimination, Blacks in the United States have been frustrated trying to get something done to change their predicament. From being subjected to constant suspicion, frequently frisked, wrongly accused, and denied equitability in the justice system to having their rights violated, incarcerated without charges, gunned down like animals and simply watched their assailants walk free – such as in the case of George Zimmerman/Trayvon Martin – it is near impossible for any “Non-Black” individual to imagine or even get close to understand the severity and seriousness of the problem. And the more Blacks attempt to explain, the more Non-Blacks either shrug off the problem or simply reject the issue outright. It is indeed frustrating.

The federal government which would usually seek to “remedy” social issues such as overt and blatant civil rights violation in Ferguson, MO and many other parts of the country – as it did with voting rights, Equal Employment Opportunity Rights and so on – has been silent; and those (the Blacks) “who’ve made it”, those who have a voice, those who could make a difference – such as Oprah Winfrey – seem completely detached from the reality they once knew and lived. Now, the frustration has boiled over with the gunning down of Michael Brown by Officer Darren Wilson who fired his weapon at least six times at the unarmed teenager during the incident. And yet, there seems to be an element of surprise and shock expressed by the Non-Blacks as if the race relations in America was solved a long time ago with the emancipation, or the rights to vote or perhaps with the election of Obama to the presidency.

What is everybody smoking? Suffice to listen to Fox Opinion (known by most as Fox News), whenever tragedies such as the Trayvon Martin, Jordan Davis and now Michael Brown happen. Not a single host at Fox network seems to have empathy for those victims and their families. As far as Fox hosts are concerned, the victims are almost always to blame. This is very troubling as Fox Opinion has the largest viewing audience according to the latest rating. By extrapolation, the country race problem seems more acute today and is not going away anytime soon. Apparently those who have such a large audience, those who are in a position to contribute towards a solution to the race relation issues in the country have instead chosen to exacerbate the problems.

It’s not impossible to solve race relations; it will not be perfect. Well, it will never be good but if at least the denial of the problem would not be an issue to grapple with; that would represent a giant step towards a solution. The race relation issue will not go away by itself; race relation is not a problem for time to resolve. It is an issue for individuals to tackle, to work at and to improve on. That’s the essence of a better society.

If one is to judge by the comments of both Fox Opinion hosts and guests when those types of tragedies occur, there is a considerable sector of America who still dreams of and would like to go back to the sixties when blacks had no rights, no personhood and could be disposed of like dogs. The dreamers have no doubt forgotten what ensued, a very dark cloud of history hangs over the country ‘till today. It was Selma, Alabama then; it is Ferguson, MO today. John F Kennedy -35th president of the United States – was right to reason that “Those who make peaceful revolution impossible will make violent revolution inevitable.”