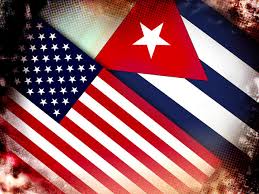 U.S.A. According to recent news the seemingly budding relationship between two distinct regimes has sparked positive and negative reactions. On December 17, 2014 President Barack Obama addressed the nation on the monumental move towards re-establishing diplomatic relations with its Caribbean neighbor. Meanwhile, Cuban leader Raúl Castro also admitted to the interest in normalizing relations with the United States. As part of the protocol, Obama has displayed his interest in increasing trade, travelling, as well as opening embassies on the island.

However, certain ‘actions’ have already stirred up controversy within the Cuban-American community. This coincides with the uplifting of the U.S. trade embargo against Cuba and the release of three Cuban spies from American territory. The three Cuban spies were sentenced for their involvement with the shooting of two Brothers to the Rescue planes and the deaths of four pilots. These spies were known as Gerardo Hernández Nordelo, Antonio Guerrero and Ramón Labañino Salazar and were incarcerated in Kentucky, California, Marianna, and Florida. Although, it has been confirmed that former American prisoner Alan Gross has been released from his 15 year sentence, he was not the main victim who was exchanged for the spies. Instead American officials had their eyes set on a CIA agent who had in jail for about 20 years for the sake of obtaining necessary information.

As a result, many first wave hardliner Cuban exiles have dismissed the action for diplomacy as a betrayal to their identity. Some have labeled Obama as an ‘appeaser in chief’. Maggie Khuly, a sister of one of the pilots that was attacked in the Brothers to the Rescue mission stated, “We’re giving them a lot of stuff in payment for the exchange of a hostage. What about human rights? It’s just incredible. I’m deeply disappointed in the president.” Others have criticized the President’s mismanagement of international affairs. Former Florida Governor Jeb Bush claimed, “Cuba is a dictatorship with a disastrous human rights record and now President Obama has rewarded those dictators.” By accepting the terms of agreement with Cuban authorities, it allows an even greater chance for those in power to manipulate the U.S. government to acknowledge their requests. There are those on the other side of the spectrum that support the opening of relations citing it as a chance to uplift the embargo and repeal the Helms Burton Act. Previously, Hilary Clinton has admitted that the trade embargo is unnecessary due to its lack of progressive production. Some have even encouraged that a transitional government is required without the control of the Castro family. In this way Cuban citizens can hold free and internationally supervised elections.

Based on the political nature of the situation, it should be noted that there are certain benefits from the proposal. For instance, if the proposals are met there will be freer travel to Cuba by Americans except for personal reasons (tourism) and goods can be exported to support the activities of Cuba’s self employed sector. Those that can travel freely belong to a group of 12 travelers which include business people in permitted activities and humanitarian projects. The proposals extend to the amount of goods that can be brought to the U.S. in which Americans may bring back about $400 worth of Cuban products per trip.

All that can be done is to hold on to hope that peaceful relations can be firmly established between the two countries without the intent of self interest(s).