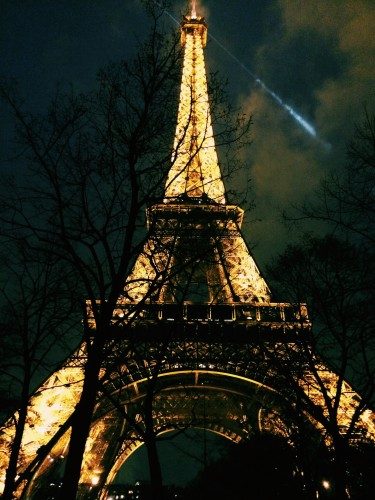 My House and Home

PARIS, FRANCE. Adapting to new places is something I’ve always been very good at because it was the only thing I could have done without being known as not only the “weird kid”, but as the “weird, new kid”. By the time I was a sophomore in highschool, I had already attended seven schools from moving from town to town because of my parents’ jobs, so I didn’t have a solid sense on what I thought I was naturally good at and what I thought I was interested in learning about. After five months of debating on whether or not I wanted to go to Marrakech for the semester to “re-discover my roots” and learn how to speak in French at the same time, or to go to Paris to study courses related in Business Administration for my major and fulfill my life-long dream, I decided to fulfill the latter.

A month before my departure for the program, my left eye started to twitch uncontrollably, my right foot jerked every so often, and my stomach would scream with anxiety whenever I thought about my semester abroad. I thought I was slowly losing my senses, but figured out that ‘Paris’ was like my model of the flawless male A-list celebrity. I told my family that as excited as I was of studying abroad, I was scared that Paris in real life wasn’t going to – at least closely – resemble the way I had imagined it all these years, and that the “City of Romance” was just going to be an arrogant and narcissistic celebrity who faked his way through success. Other than ‘Paris’ and being stuck with my whole immediate family on a fully furnished desert island, I didn’t have any idea as to what my pillar of complete comfort and ecstasy would look like in another life. I remember looking through numerous study abroad booklets last year for programs in Spain (for when I thought of learning a new language), for Germany (for when I wanted to be back together in the same country as one of my best friends from high school), and for other countries in Europe and South America because I knew my options were limitless – not because I had the choice to choose any country I wanted, but because I didn’t know what I was looking for.

After growing up in Saudi Arabia for 13 years, living in the Philippines for two years, and going to boarding school in a quiet town in Western Massachusetts in the United States as a 16 year old, I was beginning to drift from what I thought my usual – and ideal – world of comfort was and was starting to realize how vague and indefinite my ideas of what I considered ‘home’ were becoming. It was easy for me to call the Kingdom of Saudi Arabia “home” since I was born there, and there were limited choices a young nine year old could call “home” other than where his or her scattered Legos were. On top of that, I didn’t consider the Philippines my home until my parents moved there when I was 15. But even saying that makes me feel a little dishonest towards the country I still sometimes feel foreign towards. Despite the fact that I hold a Filipino passport, can have a conversation in Tagalog and know that there’s a bed waiting for me in Manila, I still have to laugh whenever I joke about how much of a ‘Manila Girl’ I’ve become over the past few years.

When my sister returned from her semester abroad in Paris when I was ten years old, she had already learned how to read in Arabic and learned how to – almost fluently – speak in French. I had not taken a French class yet, and did not have much background on what France represented (other than knowing that there was always ‘France’ written somewhere on any photo of the Eiffel Tower.) When I heard my sister speak in French for the first time, I was immediately drawn towards how the letters looked, how the language sounded and how smooth the transition was from word to word. I didn’t know how to speak in Tagalog when I was younger, and only understood “dramatic” and exaggerated statements in Tagalog from watching Primetime Filipino soap operas with my parents in the living room. And at the same time, I was being taught how to speak in mediocre Arabic at school. I felt complete in a sense where I was happy and thought I wasn’t missing anything, but after stepping onto my first métro in Paris this past semester, I – for some reason – fell even more at peace with myself, and didn’t know how much better things were going to get.

As soon as I arrived at the Charles de Gaulle Airport, I slowly felt my agitated-self get replaced by complete numbness as I anticipated leaving the airport. While my Shuttle Bus drove towards my host family’s house in the 13th arrondisement, I looked outside the window and felt the same kind of euphoria I had first and last felt while at Britney Spears’ Circus concert in New York City. I loved and lived for Britney Spears growing up and because she never toured the Middle East when I was younger, I never got a chance to see her and thought I was never going to be able to see her in concert. And, at the time my baby mind first realized I was becoming a grown up, my sister surprised me with tickets to Britney’s Madison Square Garden concert the week I arrived for boarding school. After ten years of dreaming about seeing her in concert, I was finally able to see her and cried as soon as Britney Spears came out, just like I had imagined her all those years. I rarely cry because of extreme happiness, and when I did at the concert, I didn’t think I was ever going to feel that kind of happiness again – until I got to Paris.

The only goal I had thought of accomplishing was to be able to hold a conversation in French, but as my weeks in Paris flew by, I realized how much I missed and how much I was missing. I don’t know how to poetically explain how much Paris changed me this past semester without sounding too cliché except that I was ridiculously happy as soon as I arrived. I had never felt as at home as I did in Paris.

I felt centered and within my own self-conscious in Paris as though the five months deciding between a semester abroad in Morocco and a semester in Paris was completely unnecessary. I was myself and felt everything I found important in life line-up with a lot of what I had learned were some of the fundamental points that made up France’s culture. I would have never imagined that the hourly blinking Eiffel Tower lights at night, the inconsistent sirens throughout the city, the inhumane and monstrous odors in the métro to the thick, wonderful air from bakery vents around the city were going to – altogether – break open my vault of tight-locked emotions out in only four months.

The emotions, the feelings and the priorities I had paid no attention to for so many years came rushing back and had me create my own safe-haven in my new home: Paris, The City of Lights.