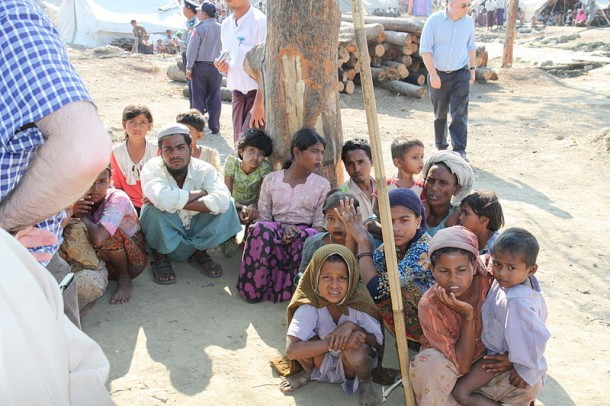 Media exposure of endangered migrants around the world has never been so intense as that of the past few months. African and Middle Eastern migrants made their life-or-death journey across the Mediterranean for Europe as Rohingya Muslims from Myanmar struggled to reach ashore while stranded at sea. According to an overview from the United Nations Population Fund, in 2013, 3.2 percent of the world’s population (232 million) already lived outside of their country of origin. Within this population were no shortages of children, pregnant women and elderly people forced to flee under the pressure of wars, poverty and suppression. Yet as much as the phenomenon of mass cross-country migration is becoming a global trend, so is the unwelcome, cool and even hostile reception of migrants in their destination countries.

Myanmar opposition leader and Nobel Peace Prize winner Aung San Suu Kyi has been criticized recently for her silence over the issue of the country’s stateless, much persecuted Rohingya Muslim population. Historically residing near the Myanmar-Bangladesh border, the Rohingya Muslims have always been considered as foreign encroachment from Bangladesh and therefore suffered second-class status in predominantly Buddhist Myanmar. Many of them were eventually stripped off of their citizenships and became stateless, floating refugees. Suu Kyi, the democratic leader who had been under house arrest for 15 years until Myanmar’s recent open-up reforms, was expected to speak up for the Rohingya Muslims. An article from NPR points out that Suu Kyi might be withholding her tongue for political reasons, as the upcoming election sees her as a favorable candidate whose votes could be affected by speaking up against the country’s majority.

The predicament of Rohingya Muslims, as a result, manifested in many Southeast-Asian countries’ reluctance to take them in as refugees. After nearly two months of drifting at sea, the Rohingya Muslims were shunned by Indonesia, Malaysia, Thailand and Myanmar before triggering the biggest migrant crisis in Southeast Asia of recent years. Last month, the four countries above finally took some of them in while others were still dumped and adrift at sea.

Even for the “lucky” ones who have reached their country of destination, hurdles and obstacles abound as they struggle to build a life for themselves. A report from the New York Times highlights the new lives of Rohingya migrants in Malaysia as slightly better off than their previous conditions at best. Unable to work or receive education legally, they are forcefully stuck in a vicious cycle of poverty and illiteracy.

African and Middle Eastern refugees fleeing war, poverty and repression share a similar fate as the Rohingya Muslims. Many of them rode in overcrowded boats in droves to cross the Mediterranean only to be housed in shelters and facilities worse than prisons. Without official support, they could not locate jobs and housing after securing refugee status. Eventually, they ended up homeless on the streets. Amidst such social tensions over the influx of migrants in countries like Italy and Greece, stringent policies were carried out to prevent officials from accepting and settling illegal migrants. An article from Aljazeera reports that the regional president of Lombardy in Italy has instructed mayors in the region to stop accepting illegal migrants or face fund-cutting as punishment.

The rise of such determined measures to spurn endangered migrants from settling in safer and better-off countries is becoming a global trend. Yet with the unceasing chaos and oppression from wars and poverty, it is unlikely global migration will dwindle anytime soon. Nonetheless, the issue of migration and migrant settlement is of high priority and will be the key to global peace and sustainability.