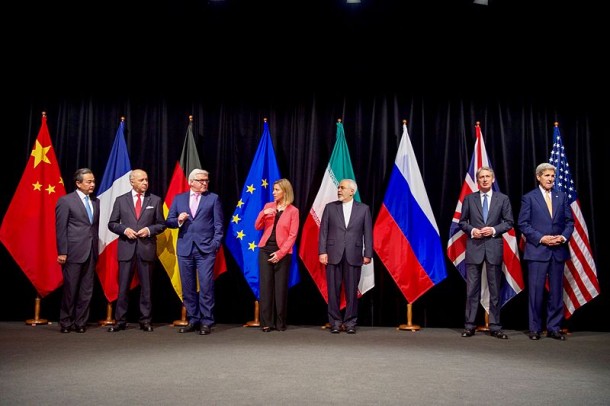 Shortly after Iran, the United States and five other world powers reached a deal regarding the future of Iran’s nuclear programs, President Obama, in a speech to the nation, announced the news as the result of meaningful American diplomacy and leadership. After years of diplomatic outreach and months of negotiations, the United States, Great Britain, China, France, Germany, Russia and the EU finally signed the deal on July 14. Lauded by some for its long-term curtailment of Iran’s nuclear work, the deal is nonetheless criticized by others as a historical mistake that would pose threats to the peace and safety in the Middle East as well as the world.

In response to critics of the deal including the Republican Party and Israeli Prime Minister Benjamin Netanyahu, President Obama declared in his speech: ”I will veto any legislation that prevents the successful implementation of this deal.” Secretary of State John Kerry, who led the negotiations for the United States during the past 20 months or so also expressed to the media that this is the best deal the U.S. could ask for, because otherwise the negotiation would not have taken so long. It was not long ago when Congress appeared split over the Iran nuclear talks in Switzerland and doubt towards the deal seems to have only escalated. With many Republicans and even some Democrats calling it a “bad” deal, Speaker of the House John Boehner also believes that the deal faces serious skepticism here in the United States.

Yet despite all the political implications, some of the agreements on both sides signify changes to come in the next decade for countries and citizens. Iran’s current stockpile of low enriched uranium will be reduced by 98 percent, down to just 300 kg. These imposed restrictions will ensure that Iran’s uranium stays safe and usable only for conducting academic research instead of making nuclear weapons. The deal has also opened pathways for international energy organizations to monitor and inspect the reduction of Iran’s uranium and centrifuges, which are both indispensable materials to making any nuclear bombs and missiles.

Although Iran still holds onto its anti-Western foreign policy stance, by adhering to the agreement the U.S., European Union and U.N. sanctions will be lifted – sanctions which have been crippling Iran’s economy and emerging middle class for decades. With the successful implementation of the deal, Western businesses will be able to invest and trade in Iran while Iranians will be given greater freedom to travel and communicate with the West. These “side effects” may have to wait until after the dismantlement of nuclear programs and the lifting of all sanctions, but they are nonetheless the biggest achievements emerging out of this deal. For Iran’s middle class, which has been suffering under the economic sanctions for years, jubilation about finally joining the international economy seems to triumph whatever nationalist rhetoric there is in Tehran.

Yet with what is basically unanimous endorsement of the Iran Nuclear Deal on the international stage, the causes for worries are not unfounded from looking at the difficult history between the United States and Iran. While the deal is a step towards a new direction, the strategies for the worst outcome are also prepared, as Kerry was reported to have said: We have negotiated a nuclear deal for the simple reason that we believe if you are going to push back against Iran, it’s better to push back against an Iran without a nuclear weapon than with one.”