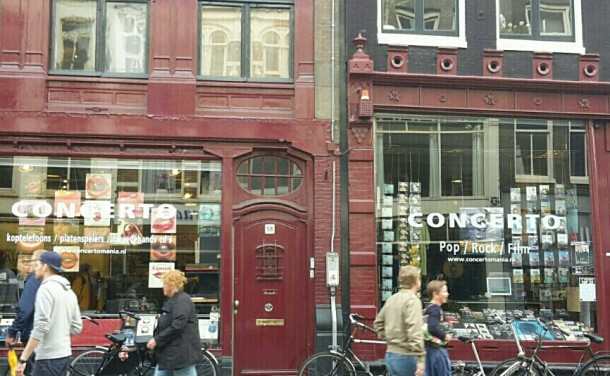 The city of Amsterdam not only is a mecca for tourists from all over the world, but it is also home to some goo music that supported highly. For most, music is something to go home to and to find good music whilst traveling would be something of a treat. Here are several venues an stores in Amsterdam that are best for its music.

If you are somewhat of a vinyl junkie, it may be highly reccomended for  you to spare some of your time to go to Concerto, one of the biggest record stores and is located in Utrechtstraat. You could practically find every other record or CD here, about three stories of recor racks, good music being played, and sometimes they hold music events in the cafe they have inside the store. Second hand vinyls are sold from 2 euros and an the store is fairly up to date with new releases. Just dig through the many inyl racks and try it out in some of the record players that are there.

There numerous recor stores in Amsterdam, but this one here can be the start of your journey. Secondhand records are also scattered throughout the many open air markets and secondhand shops.

Here we start with the many music venues in Amsterdam. Every other weekend, some events are held in the quite big venue of a bar and the tickets don´t go further than 10 euros. After the gig is held in the stage area, having some drinks in the bar is quite okay as a unique thing about the place is that the bar area is mae to look like someone`s cozy home, an yet there is quite an area for the stage on the ground floor.

These two venues are the ones that are most used by aspiring musicians and bands and even some big ones, and the price of the concert tickets usually don`t go above 30 euros, unlike those held in big venues. The atmosphere in the two venues are something one could come home to: A beer at one han an some good music to accompany your night. These venues are also located in the heart of Amsterdam, just check out their websites to see who is about to play those venues.

These venues here are not necessarily music venues, but they do include some performances here an there, yet the interesting part is that those two venues are also home to lots of cultural workshops. Additionally, Mezrab also occasionally holds some storyselling sessions.

To top it all off, in the season of summer, there are numerous open air stages or concerts held in this famous Amsterdam park.

You are definitely ready to start your musical journey in one of the most vibrant cities in the world!