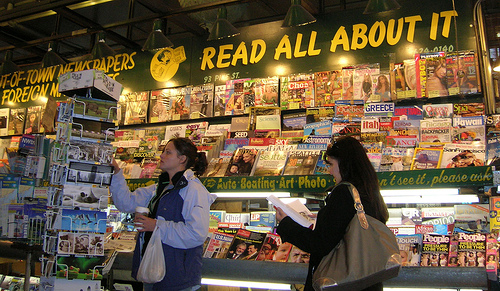 The Ethical Newsstand Giving Away Magazines For Free

The economical crisis has severely hit italian newsvendors, as people cut their expenses on magazines and newspaper (data are available here).

A roman newspaper seller has created a small network of original news-stands: people can give back their magazines, book, dvd in order for other readers to have them for free. Too good to be true? Almost. Because it’s largely due to the stubborness of Michele Di Giacomo if this kind of newstand exists, given it is not proved yet whether this business model might work.

A few yers ago, Michele did not even think of owning a newskiosk. Instead, he wanted to open a bookstore, together with his partner. But the project failed and in June 2006 the two turned to renting a kiosk in Rome, near the Rome American Hospital. Once there, by exploiting their former expertise in retail, they started offering clients free wi fi, the chance to buy gift cards, and, as said before, the possibility to recycle their old magazines, dvds and books, to allow other customers to have them almost for free. “Almost” means that whenever someone buys a newspaper or a dvd, he gets a card with a number of points on it according the expense: by using this points he can “buy” used items taken back by other customers. This allows people “impoverished” by the crisis to enjoy their favourites magazines while cutting their expenses on them. Less money and less waste: simple and effective. Nevertheless, in spite of his good intentions, Di Giacomo is struggling to build a network of “solidarity” newsstand sharing his views and keeping up with both the economical situation and the general disaffection toward the press. 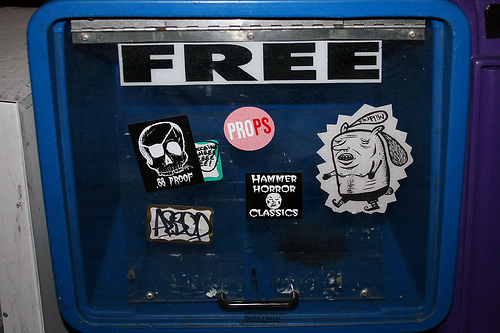 “In Rome only, over 200 newskiosks out of 1.300 closed last year because of the crisis the sector has undergone. When one of these facilities stay closed for more than six months, you have to return the license in the City” he explains. “Therefore I decided to organize training courses for unemployed or disadvantaged people to become newsvendors and to replace the former ones, according the business model and criteria we are setting”. Di Giacomo is also planning to provide his newsstand with solar pannels, whose energy will be used on electric bikes available for customers only. Though he’s very ambitious and determined, the outcome of this training is still under scrutiny as it is too soon to predict whether it will stop the decrease in newsstands. What is already on display, instead, is the offer of used items provided by the customers: it ranges from Cosmopolitan (the magazine, not the cocktail) to The Scarlett Letter (the movie, not the novel); from the latest issue of Vanity Fair (U.S. Edition) to the Bible (His edition). May the presence of the Sacred book in a newsstand be a sign: because only God knows whether the newspapers as well as newsvendors will get by in the future.

Do you still buy newpapers and magazines? Do you read them online or are you used to paper? Let us know tweeting us at @RoosterGNN using the hashtag #newspapers