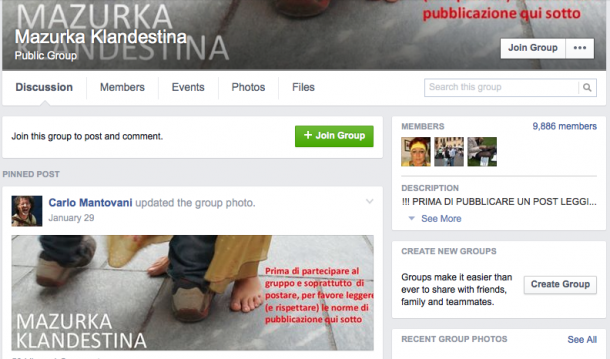 A square full of dancers, a river of ​​music and joy: it happens at night time in Italy. Everywhere, from Turin, to Rome, from Milan to Neaples, people gather in desert streets, bring their own drinks and dance up to the morning. It’s the so called “Klandestine Mazurka”, wherethe initial K is meant to express rebellion to habits such as going to the discos, where neither socializing nor dancing are the main goals. Instead, the nightdancers aim both to refuse the commercial exploitation of dance by occupying public spaces (it had happened already with tango lovers, though) and to make new friends. To achieve this, they have chosen to rivive Mazurca, a dance of Polish origin who has spread all over Europe, modifying itself according to the place where it was taking root. 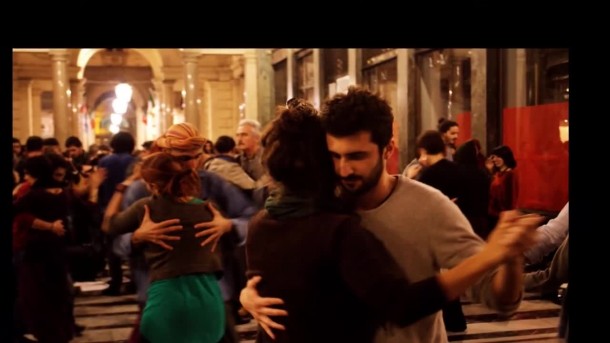 According the urban legend, it all started at the end of a concert by a group of traditional music: none of the listeners wanted to go home. Therefore someone put a CD in the stereo and opened the windows of his car turning the parking lot into a dance hall. Facebook did the rest. Today the page Mazurka Klandestina  counts almost ten thousand members and lists all the dance events through Italy.  “These meetings have nothing to do with folklore: no one is wearing old clothes. And they have nothing to do with flash mobs”, roman dancer Valeria Angela Bianchi highlights. “Klandestine mazurkas are not aimed at impressing people or proving something. I’d call it more of a “rave” of folk dances, although the word rave is always associated with drugs, which our groups are totally not into. Our sole purpose is meeting and dancing from the evening until the next morning. It is a magic we perform together, through the moves, the music and the joyful human contact” . 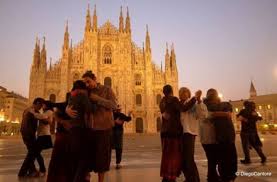 dancers in Milan in the very early morning

Francesca Zaiczyk, urban sociologist at the University of Milan Bicocca, agrees: she notices a resurgence in the need to share, to be part of a community: “The social and economic uncertainty we all live has brought instability also on the emotional level, has risen insecurity. Dance makes us feel more human and free, at least when we dance, but also bond to other dancers, whom we trust, whom we allow to lead our moves. In an age when we are afraid of the other, dancing together mean confidence, not fear”. Not bad, if you consider the fun, too.

Do you go dancing? Where? And what kind of dance you like? Let me know by tweeting @RoosterGNN or @bluelisaaa using the #Mazurka.