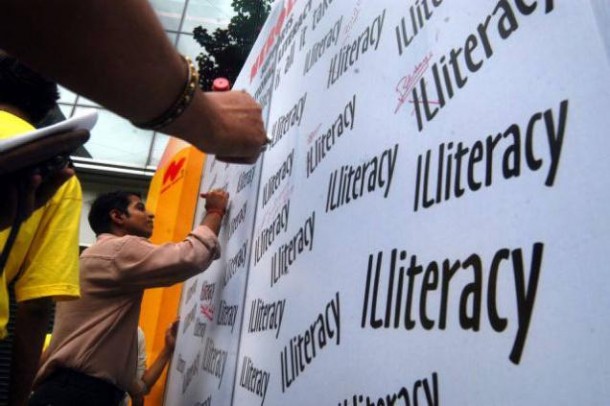 In Brazil, 99% of the population speak Portugese fluently and with ease; in Tanzania, the majority of the population can are multilingual and speak a variety of 126 languages, including English, Swahili and French. Deaf people use sign language as a means of communication, and can do so with ease. Yet why can the USA not speak their one main language, English, to a high standard? Why are those in third world countries with a lack of education, and deaf people unable to speak properly, able to communicate to a higher level than us? Is it a lack of education? An ‘Over-Americanized’ society? Or is the issue much more complex than this?

According to the National Assessment of Adult Literacy, the American illiteracy rates have remained unchanged for 13 years. Since 2003, 29% of the population have expressed a ‘basic’ reading level, and this problem extends to American prison inmates, who make up 22% of the world’s prisoners, as 70% of inmates cannot read above basic primary school level, according to BeginToRead.com.

The language problem in America is known by many citizens as the ‘Language Debate’, and the reason for it, according to them, is the large influx of immigrants in the last 50 years. Hispanics now make up 17% of the total US population, with 54 million now living in the country. The US Southern Border is where the majority of Mexican immigrants reside, particularly the state of California, where as of 2014, they now make up a higher proportion of the population than whites. The Spanish language from Mexico, as well as Portugese and more local languages from other parts of South America, has in the last few decades taken over the dominant English language, and it is this problem that many see as the reason for so much confusion over grasping English at school, and beyond it as well. They are calling for a more forceful approach from President Barack Obama, as well as the next impending President of the USA, to combat the language problem and make English the official language of the country.

While on the other side there are those blaming a lack of sufficient education on the language problem. As of 2014, 21 million students were enrolled in American universities, which was a decrease of 5.7 million since 2000. Yet it is not just advanced education that American students are missing out on, as over 1.2 million high school students drop out before graduation each year, missing out on essential comprehension of the English language, whether that be through presentation and group work, or reading texts for English class. For these reasons, many blame the decline in being able sufficiently using the English language on a lack of decent education in the US.

Whereas others blame the new ‘Digital Era’ and an ‘Over-Americanized’ society. With more children, teens, adults and even some elderly now constantly affixed to their newest Iphone 6S, tablet or computer screen, it is no wonder they have become so distant from the English language, as although television was seen as having the same negative impact, particularly on the youth, it still offered speech and often complex language from news channels, however the recent generations now watch Vine, a short, six second entertaining clip, or Twitter, Facebook and Twitter as a replacement for watching the news or speaking to real people. This, according to critics, has made the current generation more lazy with enunciation and is the reason for so much illiteracy in the country.

There is no one answer to the endless question of why so many can no longer speak the English language to a high standard in American, but it is definitely a rising problem, and if something is not done about it soon, it will be gone forever from US society.