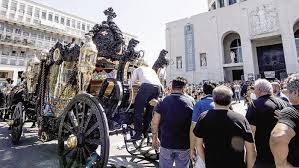 To Rome with Important Movies

Rome is going through the worst period of her history cause of recent political and criminal scandals. For less than two months to beginning of Jubilee declared by Pope Francis, this city lost her resigning major Ignazio Marino. He has been left alone by democratic party and hardly disapproved by people who didn’t accept his long travels, garbages’ management, reaction to Mafia Capitale, his silence around Casamonica’s burial (a stunning event dedicated to a famous criminal) and the following Pope’s declaration regarding a visit to Philadelphia: “I have not send the major Marino”.

But once upon a time a wonderful city. Edward Gibbon and Lord Byron, two icons of English literature, trembling talked about it. Their emotion, watching old monuments and roads, was so touching. At the same time a good number of Italian film directors, according to specific historical and economic period, created something that is now studied in all school of cinema, showing their personal point of view about Rome and roman citizens.

Pier Paolo Pasolini. A poet who also spent time to direct movies. He often choose poor guys and girls, unlucky people too times forced to survive stealing and running away. Pasolini’s Rome was not a beautiful place to live. Among his cinematographic production, we have to mention movies as Mamma Roma, Accattone.

Federico Fellini. His life and career were an intensive dream. He thought to Rome in a less dramatic way because economic boom transformed the whole country. Sad people were replaced by characters of star system, blinding lights, hard desires and beautiful women. Very remarkable the scene of Sweet life located in Trevi’s fountain, where Anita Ekberg said to Mastroianni: “Marcello, come here!”.

Carlo Verdone. A comic actor and director born in Rome in 1950. One of best performer appeared in television. The collection of rough masks, linked to other shy characters, lead to success roman shortcomings. Have you ever smiled or cried watching Gallo Cedrone, Viaggi di Nozze?

Paolo Sorrentino. Italy doesn’t consider him as a master, while critics of other countries are writing about an incredible talent who could save the cinema. The great beauty, apology on fall of Rome, won the Oscar as best foreign film. Golden age of capital is over. Poets don’t know how to write a poetry, writers love crazy life and foolish men won’t change the world. Sorrentino is ever inspired by Fellini.