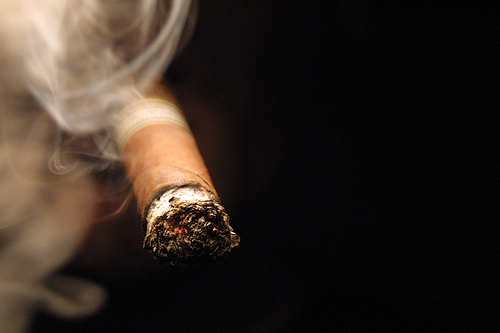 The Cost of Smoking: Tobacco Prices among EU Countries

The tobacco industry is like a golden treasure hold by really few international companies. Also in Europe, the whole production process has an enormous impact on economy, bigger than what one could perceive at a first glance. Just to give you an overall idea, the approximate retail value of the whole tobacco sector amounts to 121.440 million of euro. Tobacco related activities occupy around 1,5 million of people all around Europe. And data is set to increase.

However, all the positive trends labelling the tobacco market are being threatened by governments’ decision to levy charges on tobacco selling, especially due to the pressure of several anti-smoking campaigns and lobbies. For the total wholesales, tobacco industry has incurred in a strong economic contraction: just in Italy, for example, more than 56.000 producers may have lost 100 million of euros on their incomes in 2014.

It’s been said that increasing the price of tobacco is quite an incisive control policy over tobacco dependence. During the last years tough, prices got definitely higher but results are not as sudden as expected. It must be said that many countries experienced an increase of 10, or maybe 20 cents on cigarettes: not enough to prevent customers from smoking habitually.

Heavy taxation, lobbying and a complex on-going European reform are therefore complicating the European tobacco world. But how pronounced are price differences among EU countries? 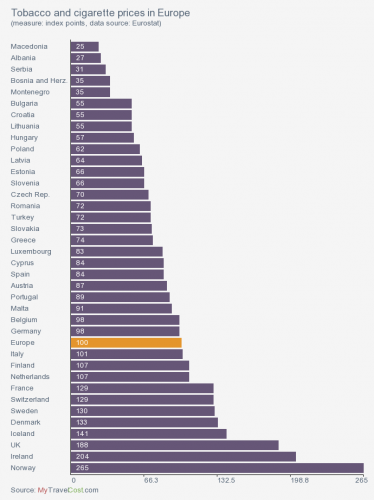 According to Eurostat, we can set an average European level of prices at 100. If we think of the same product and compare the prices across European countries, we can easily appreciate how the maximum value on the chart is 265 index points in Norway, while the lowest value is 25 index points in Macedonia.

Indeed, life is probably more expensive for Norwegian smokers since the normal price for a cigarettes’ package stays around 11.84 €. The same will happen for UK (11,35 €). Spain and Italy ranks in a medium position, while English, Irish but also French smokers will love Portugal, Poland and especially Belarus and Ukraine: here prices are incredibly lower (from 76 cents to 4 €).

Tobacco prices vary by countries mainly because of different taxation systems. Each government has to follow EU and WHO guidelines, that usually encourage each party to adopt appropriate tax and price policies on tobacco products as part of its national health objectives for tobacco control. The map below gives a more immediate idea of prices for a 20 cigarettes pack of the most common brand. 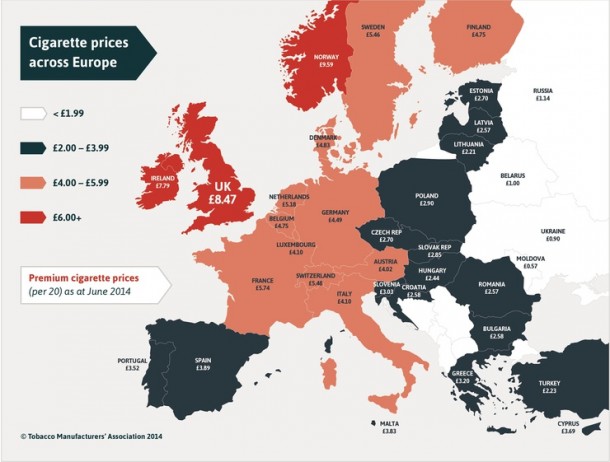 In April 2004, the Council of EU Agricultural Ministers decided to reform the raw-tobacco sector along the same principles as the CAP (Common Agricultural Policy). The system of production quotas was abolished and financial support decoupled from production. EU Member States covered by the tobacco regime were given a transition period to adjust, between 2006 and 2009. Decoupling aid from production allows producers to grow other crops – if they wish – while maintaining stable incomes.

Since 2010 then, EU aid has been completely decoupled from production. 50% of the previous tobacco aid was incorporated into the direct payment system. The other 50% went into the EU’s rural development programmes, particularly in tobacco-growing regions.

What is more, in 2014 a new European directive fixes specific norms about tobacco production and selling along with its related products (cigarettes, roll your own tobacco, pipe tobacco, cigars, cigarillos, smokeless tobacco..). In particular, it is now prohibited to smoke cigarettes and roll-your-own tobacco with characterising flavours; the directive requires now that health warnings appear on packages of tobacco and related products. Combined (picture and text) health warnings must cover 65% of the front and back of cigarette and roll-your-own tobacco packages. Finally, to combat an increasingly concerning issue like counterfeiting and forgery, introduces EU-wide tracking and tracing to combat illicit trade of tobacco products. It also sets out safety and quality requirements for consumer electronic cigarettes.

One cannot forget that there is a quite important distinction between raw tobacco and the final product, which is the common cigarette that smokers are used to purchase. Indeed, the tobacco production process is as long as complicated and consists of a number of steps. It starts with crop cultivation and harvesting and continues with the first or primary processing of the raw material. There is then a secondary processing step (tobacco product manufacturing), which ends with the distribution of the finished tobacco product.

There are almost 101.000 producers of raw tobacco in the EU, clustered in a small number of countries and concentrated especially in certain regions of Italy (Campania, Umbria and Veneto), Greece (central Macedonia, East Macedonia, Thrace and Continental Greece) and Spain (Extremadura). These three countries account for almost 87.8% of EU output, with the other EU producer states (France, Germany, Portugal, Belgium and Austria) providing just 12.2%

Finally, remember that market share leader companies in Europe have always been well-known international groups like Philip Morris International and the British American Tobacco. These companies work at a global level but have great interest in the European area: indeed, within the international framework, the EU today ranks in 7th place in terms of total tobacco harvested area, preceded by China, Brazil, India, Indonesia, Malawi and the USA.