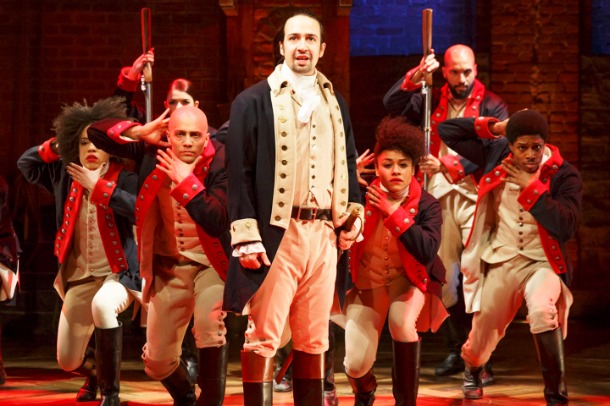 A Broadway rap musical about the founding fathers of the United States. While this may sound like a confusing or strange combination, Lin-Manuel Miranda’s “Hamilton” has been taking the theatre world and beyond by storm. Just last week, the show’s soundtrack won a Grammy for Best Musical Theatre Album. Its cast staged the first ever Broadway performance to be broadcast by satellite at the ceremony. Back in October, the “Hamilton” soundtrack made a historic debut on the Billboard 200 at n. 12 – the all-time highest for a cast recording. It placed in the Top 10 under Cast Albums, Rap Albums, Digital Albums and Total Album Sales. With Broadway musicals often having a restricted white, middle-class audience located in New York City, the show is reaching wide and making history.

The Story of Hamilton

In 2008, creator and star of the show Lin-Manuel Miranda was working on his hit Broadway musical “In The Heights” when he picked up historian Ron Chernow’s biography of Alexander Hamilton. Miranda was immediately taken in by the founding father: an ambitious and confrontational immigrant from the Caribbean who wrote his way through his political rise and fall. A scrappy genius full of hunger and revolutionary spirit, now regarded as one of Early America’s most controversial figures. Seeing a parallel between Alexander Hamilton’s life and modern hip-hop music, Lin began working on a concept album. He explains of Alexander Hamilton’s life:

It’s a story of someone who rises and falls on the strength of their facility with words. So to me, this was a hip-hop story. 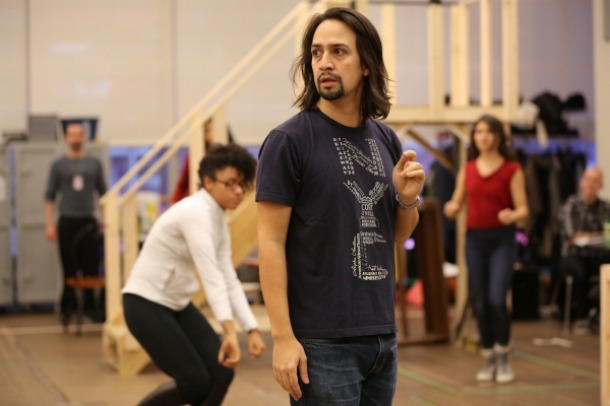 The following year Miranda was invited to a White House Evening of Poetry, Music, and the Spoken Word. Instead of performing a number from the award-winning “In The Heights”, he sang an early version of “Hamilton”’s opening number and received a standing ovation. He soon decided to turn his concept album idea into a fully-fledged musical, spending six years writing the show, consulting historian Ron Chernow, and staging workshops to perfect the project. In January 2015 “Hamilton” finally opened at the Off-Broadway Public Theater and transferred to Broadway’s Richard Rogers Theater on July 13th (the day after historical Hamilton’s death).

Everything about Miranda’s “Hamilton” is refreshing and daring in the best way possible – rap battles between Jefferson and Hamilton on Early America’s financial system, 2.45 hours of music interrupted only by one short spoken scene, the retelling of American Independence from the point of view of one of its overlooked leading figures… Perhaps most important, however, is the casting. The only Caucasian main cast member is Jonathan Groff, who plays King George III. All other actors are Latino (including Miranda), black, Asian, or mixed race.

This is no colour-blind casting; the choice is deliberate, and signals a reclaiming of American history by those who have too often been excluded from it. Textbooks emphasise male, white figures as if they were the only participants to history, but “Hamilton” proves that everyone can be a part of the narrative. This is also reflected in the understated ending of the show, shifting the focus to America’s overlooked “founding mothers” – in particular, Eliza Schuyler, Hamilton’s wife and the driving force behind the preservation of his legacy. As Ron Chernow states about casting:

This is an inspired idea because these young black and Latino performers are not only bringing extraordinary talent, but freshness and passion and energy that I had never seen. Even in early rehearsal, they were already getting closer to the spirit of the American Revolution than anything I had seen either on stage or screen. 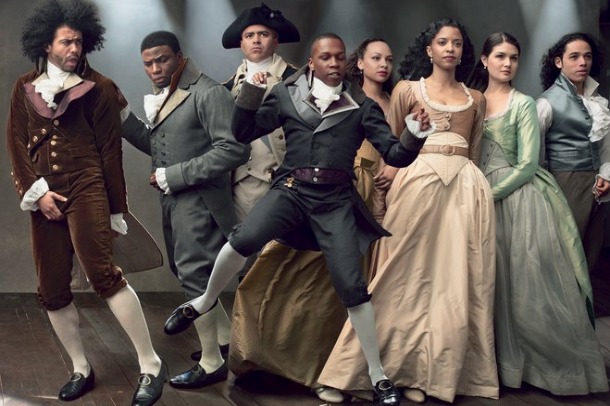 “All Together Now” | Annie Leibovitz, Vogue

A diverse cast, an emphasis on immigrants’ role in American history (both through Hamilton and Lafayette, the revolution’s fighting frenchman), numerous references to slavery reminding of those in bondage while revolutionaries fought for freedom… all bring the past to life and present a relatable account of the founding of the nation, an account in which women and people of colour are just as present, if not more so, than the usual “dead white guys”. As Lin Miranda explains to The Atlantic, “this is a story about America then, told by America now”. According to Chernow:

[Hamilton] has revolutionised musical theatre by taking three things that had never been fused together – hip-hop, Broadway show tunes and American history – in this brilliant mix. I think the show really captures the changing demographics of the country. People go into the theatre, and as they are watching 18th-century America, they’re simultaneously seeing 21st-century America. Suddenly, the 18th century seems very immediate and very accessible in a way that it has never been before. The show is reacquainting Americans with their own origins.

History Has its Eyes on Hamilton

The idea of retelling Independence through hip-hop on a Broadway stage is ambitious and intimidating, but Miranda refused to throw away his shot at changing the face of the American musical. Celebrities, scholars, and politicians alike have sung praises about his revisionist approach to key historical events. The 46 songs in the musical mix showtunes with hip-hop and are rife with clever references to modern art and society. Lyrics like “Alexander Hamilton / We are waiting in the wings for you” are not only humorously self-aware but also emphasise the parallel between past and present America. Lin Miranda points out today’s political fights are similar to those of 1776: state vs. national rights, foreign intervention vs. domestic priorities, slavery and modern civil rights…

According to Yale professor and historical advisor Joanne Freeman, Hamilton captures the spirit of the revolution and tells American audiences their story even through its dramatic license and simplification of events. “The past isn’t an exact fit for the present. But Hamilton isn’t about that exact fit. It’s about making that past inclusive and empowering, humanizing and energizing a subject – the nation’s founding – that all too often seems carved in stone”. 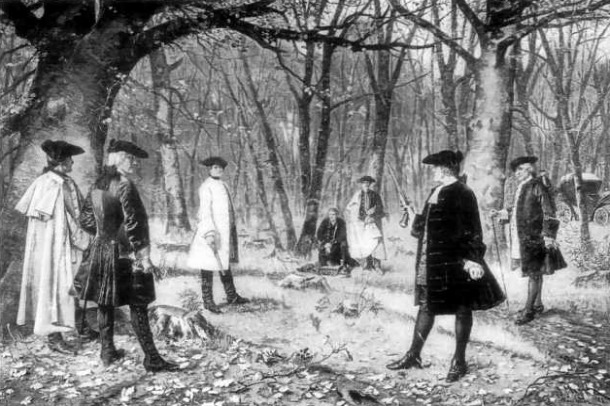 Lin-Manuel Miranda turns the story of one of the past’s most complex, contradictory figures into the story of the hardworking immigrant at the bodega, of the woman behind-the-scenes of a company dominated by men, of the activist fighting tooth and nail to effect change in the face of ignorance and resistance. Through his masterpiece he allows anyone to reclaim our collective human narrative and urges us to look beyond the one-dimensional version of events we are often subjected to.

There is currently no way to see Hamilton outside of Broadway, but the original cast album is available on iTunes and there is talk of an official video recording – just wait for it. But don’t be surprised if rhyming couplets about the revolutionary war suddenly become the soundtrack to your life, or if you find yourself crying over the “bastard / orphan / son of a whore” immigrant who created America’s financial system.