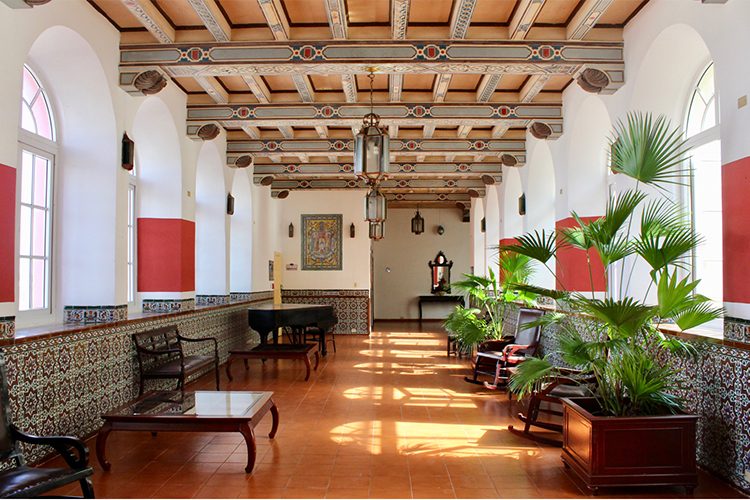 Havana’s Mafia Hotels Offer a Glimpse of Gangster Past

Leah HodgsonFebruary 6, 2017
CubaTravel0 Comments 0
The following article is published in the #RGNNCuba Magazine: Vol. I, Winter 2017, produced during ROOSTERGNN Academy’s first Travel Journalism & Photography Internship Seminar in Havana and Trinidad, Cuba, under the editorial direction of RGNN Expert and Mentor Benjamin Jones. Follow #RGNNCuba for all of our Cuba coverage.

Proudly posted in the front hall of the Hotel Seville in Havana, Cuba, surrounded by colorful Moorish tiles and grand decorated columns, is a black and white photo of notorious American gangster and one-time guest Al Capone. And he wasn’t the only U.S. mob boss to enjoy the hospitality of the hotel, which also entertained such underworld figures as Lucky Luciano and Meyer Lansky.

Capone, Luciano, and Lansky first did business from Cuba during the era of prohibition by smuggling illegal rum into the United States. Built in 1908, and originally known as the Hotel Seville Biltmore, the hotel attracted these American mobsters drawn by the opulent Spanish-influenced interior, covered in Andalusian tiles, with an airy lobby and stunning rooftop restaurant where the gangsters enjoyed the view of the city while tucking into lobster washed down by rum cocktails and vintage champagne.

During his stays, Capone would take up the entire sixth floor, where he partied and would negotiate various mob activities. However, closer to the 1940’s, the mob members that made up the Sevilla guest list were more of the likes of Luciano, a powerful Mafia head and rival to the New York Mafia families, as well as Amleto Battisti, one of four directors in charge of overseeing activities and exchanges between all members of the criminal empire.

The hotel’s historian and head of public relations, Constantino Pupo, notes that former employees described Battisti, who famously occupied the hotel beginning in 1935, as “a real gentleman who spoke several languages and didn’t act like the typical mafioso”.

Located in the Habana Vieja, or Old Habana, area of the city, the Sevilla’s second restaurant, separate from the courtyard dining area often graced by live music, is called “Roof Garden” and is located on a ninth floor terrace, providing views of the Centro Habana, Vedado and Miramar neighborhoods.

‘The restaurant was an old favorite of Luciano’s”, says Pupo. “The U.S. government wanted Luciano expelled, but the Cuban government denied that he was in the country. To the embarrassment of local officials, a photographer working for the FBI managed to snap a photo of the crime boss dancing with a young woman in the rooftop restaurant, and he was kicked out of the country shortly afterwards.” 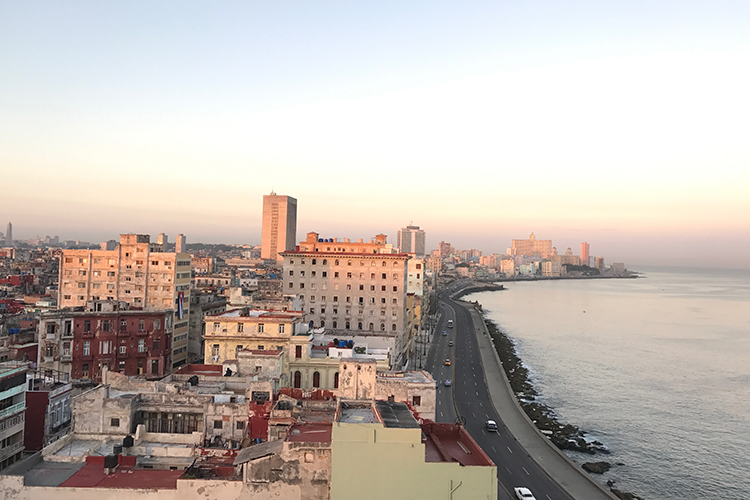 View of the Malecón from Hotel Deauville in Havana, Cuba | ROOSTERGNN

A short walk from Hotel Seville stands the Hotel Deauville, a run-down electric blue building with simple mid-century architecture, reflective of what was common in 1958 when it was built. The lobby’s ceiling-high windows overlooking the Malecón, the city’s seaside promenade, offers ample lighting between the bar, seating area, and reception, revealing an interior in much need of refurbishing.

“The Deauville served as the primary point of operations for Miami mob boss Santo Trafficante Jr. and several other important members of the crime family employed by the original owner in the 1950’s,” says Ana-Maria Rodriguez, the Hotel Deauville’s director of public relations. At the time, the hotel also featured two casinos: one has since been removed, and the other turned into a 7 CUC buffet by day, and discoteque by night.

Following the Malecón towards the neighborhood of Vedado resides another well known former Mafia hangout, the Hotel Nacional. Built in 1930 in the Spanish style of the famed Breakers in Florida, the hotel was a favorite haunt of Lansky’s from 1937 until just before Fidel Castro’s revolution in 1959, which chucked out American businesses, including organized crime, from Cuba. 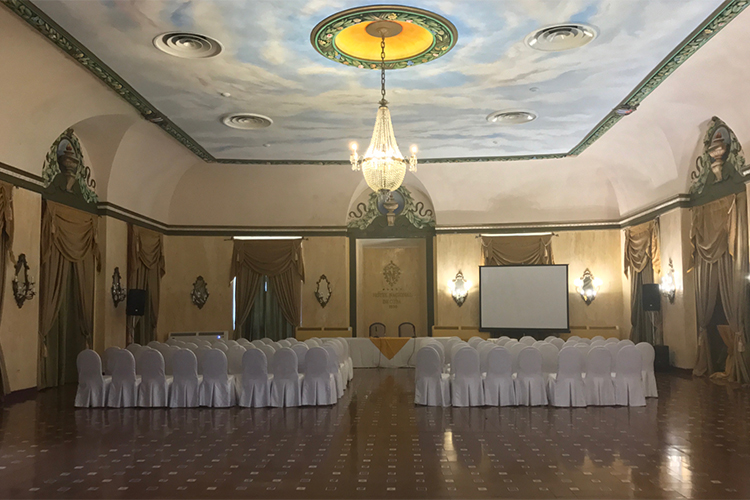 A yellow palace perched above the Malecón, the hotel offers 436 rooms, three bars, and several restaurants, along with amenities such as two swimming pools, a garden cafe, and the Cabaret Parisien.

Past the outdoor terrace is the History Hall which boasts a display of photographs of iconic guests who have stayed at the hotel over the almost last nine decades, ranging from figures like Walt Disney to Winston Churchill and Vladimir Putin to Betty Grable. According to Hotel Nacional Director of Public Relations, Estela Vazqez, “Hollywood heart throb Errol Flynn also liked to stay here but he was a notorious drunk.”

Vazqez notes the old casino, decorated with tiles from Spain, ornate chandeliers, and a sky blue ceiling, was once a popular place for the gangsters to gather. This room, now a conference hall, hosted the famous Mafia summit in 1946 when Lansky and Luciano summoned 400 capos, or Mafia lieutenants and sub-lieutenants, to discuss their criminal activities and divide up the illegal endeavors in the United States and in Cuba.

During the meeting, the hotel was sealed to outsiders, and the other underworld underlings were accommodated at the Hotel Seville Biltmore. Security was tight at the hotel to ensure the event ran as smoothly as possible, and without any legal or publicized interruption.

These days another generation of Americans are staying at these same hotels which once hosted gangland’s greatests, but they are here to enjoy more benign pursuits as the country opens up once again to U.S. visitors.