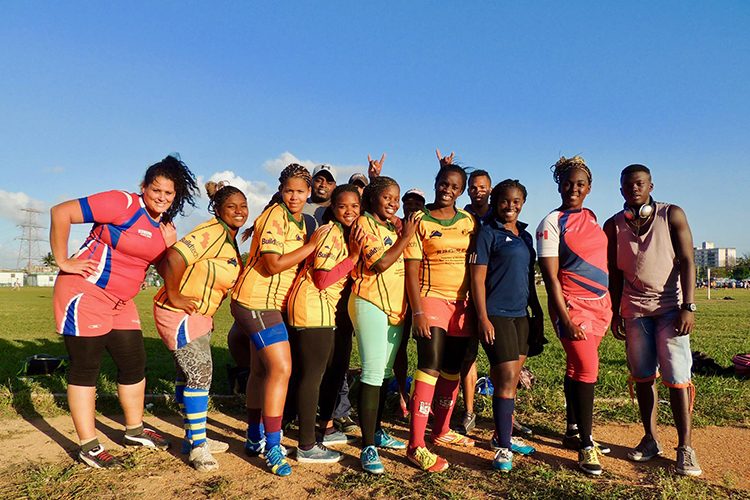 Rugby in Havana: An Unknown Sport on the Rise

Minki KimFebruary 7, 2017
CubaTravel0 Comments 0
The following article is published in the #RGNNCuba Magazine: Vol. I, Winter 2017, produced during ROOSTERGNN Academy’s first Travel Journalism & Photography Internship Seminar in Havana and Trinidad, Cuba, under the editorial direction of RGNN Expert and Mentor Benjamin Jones. Follow #RGNNCuba for all of our Cuba coverage.

As I lay on the sun-drenched ground, coughing, sweating, and wheezing, I had no regrets in deciding to train with the local Havana rugby club, “Ciudad Deportiva”, after two weeks of punishing myself with a steady dose of cigars and rum. As much as I’d like to blame my running shoes, I don’t think having my cleats would have helped me very much in matching the raw athleticism of the Cubans.

“Pushups!” shouted the coach of the club and national Cuban men’s rugby team. With my short rest disturbed, I dragged myself back onto the pitch and was amusingly annoyed at how the only English word he used was the one I feared most. As my experience proved, it’s becoming obvious that rugby is quickly gaining global popularity.

During the past summer’s Olympic Games in Rio de Janeiro, the world was introduced to the sport of rugby (Rugby 7s, the seven-a-side format). From the moment the sport, which is a mix of soccer and American football, won its bid in 2009 to enter the Olympics, rugby pundits from across the globe have been salivating at the thought of the promotion as a result of such a level of international exposure.

This is especially intriguing for the island nation of Cuba, whose most popular pastime, baseball, was the Olympic sport that was removed in favour of rugby.

Rugby in the capital city of Havana, although unknown to many residents, is alive and well with four club teams (Ciudad Deportiva, Indios Caríbe, Giraldillos, and Martí) available for prospective athletes. For men, the sport is played at the Under-17 club level, where full-contact training begins, the Under-20 level, and the Senior Men’s level. Over-35 competitions are available as well. Women’s competitions begin at the Under-20 level, up to the Senior Women’s level.

Rugby is played all-year round (Both Rugby Union, the fifteen-a-side format, and Rugby 7s) and practices are usually held on Tuesdays and Thursdays for men. Saturdays are dedicated to matches, but are used for practices depending on the schedule.

Women’s practices are held after the men’s sessions during the week and before them on Saturdays. You can find a couple of the clubs training on the multi-sport grounds of southern Havana’s Ciudad Deportiva. If you wish to donate gear during your stay, it’s best to stop by one of the training sessions.

Cuban rugby relies on these donations by visitors and touring teams for equipment and gear, such as jerseys, shorts, and cleats. The funding isn’t available yet, but according to Chukin Chao Campanioni, a Cuban lawyer and the co-ordinator for the Federación del Rugby Cubano (Cuban Rugby Federation), “We are hopeful for positive change during the next Olympic cycle”. 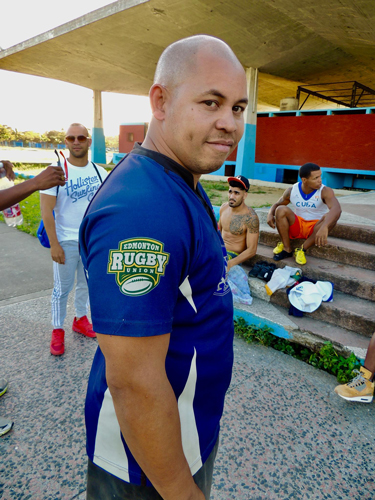 A Havana player proudly displays his jersey from the Edmonton Rugby Union, based out of the Canadian province of Alberta | Minki Kim

The Dog River Howlers, an invitational team based out of Saskatchewan, Canada, and its president Karl Fix, made many trips to Havana to provide coaching and player development along with donations. This was very apparent to me during my training session, as more than half the players sported a maple leaf on their jerseys, shorts, or socks.

Using flag rugby, many primary schools run development programs for both boys and girls aged 8-12. To witness the future of Cuban rugby, you can visit the Ciudad Deportiva (free entrance) on the last Saturday of every month to take in the Rugby Festival, where all of the primary school programs gather for a big day of flag-rugby with family, friends, and the curious.

Although without an official outreach program for youth and the underprivileged, those involved in Cuban rugby do as much as they can to help out those in the community who may be struggling with school, family, finances, or other personal issues.

“Somehow, those kids are the ones we get first”, Chao proudly stated. “Rugby is very social; the right environment for people with problems to get accepted in a game with other people who are in similar situations.”

They try to pay attention to special cases by visiting their schools and sometimes their families. With a small grin, he added, “Those are also the people who aren’t afraid to get hit. No fear.”

Although there isn’t an official system in place to recruit players, the Havana clubs have a “bring-a-buddy” rule, and they rely on word-of-mouth and the local press to promote the sport. But, as Chao said, “The best way to promote rugby is to have a ball, pass it around on a field, and make people curious.” It also helps that, for around a year, the official Cuban sports television channel has been filling in empty broadcasting slots with local rugby matches.

Aside from the rare match on local television, you can visit hotel bars to watch international tests or club rugby through ESPN 2 and ESPN 3 Argentina, though you’ll have to beat local patrons to the remote before they get the baseball or soccer going.

According to Chao, the rugby community of Havana usually frequents the Hotel Universitario, Hotel Tulipán, Hotel Palco, and the restaurant/bar Conejito. Otherwise, they rely on foreign-based friends to bring along recorded games copied onto USB drives or CD’s.

You can also discover Cuban and Havana rugby through many of the events lined up for 2017. In addition to the monthly, youth Rugby Festival, there is the World Rugby-sanctioned International Havana 7s (Formerly the “Havana Howler 7s”, jointly run by the Cuban Rugby Federation and the Dog River Howlers) in May and the National 7’s Championships held in August. Chao and the Cuban Rugby Federation are also working on starting Cuba’s first beach rugby tournament (5 or 7-aside) in July as a lead-up to the National Championships.

Despite not being a hotbed of rugby, Havana provides a unique combination of great amenities, a classic and gritty ambience, a vibrant and colourful culture, and raw, grassroots-rugby. Explore Havana and its rugby community. Get to know the players after a Saturday game, join in on the rum, dancing and singing, and maybe you’ll be fortunate enough to be invited over for a team “caldoza”, a traditional Cuban communal stew, and even more rum!

For those curious about sending a team to Cuba and who need more information on touring and donations, please contact Karl Fix at karl_v_fix@hotmail.com.

Fix is the president of the Dog River Howlers and has years of experience with Cuban rugby and international rugby outreach. He also has experience helping touring sides from many nations.