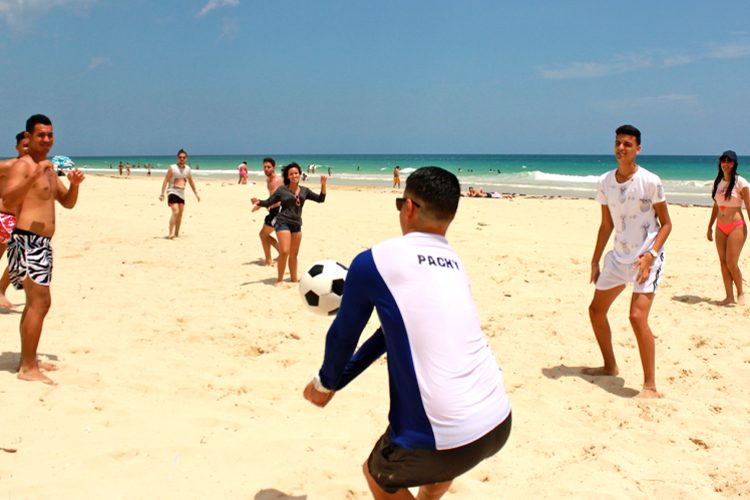 A Day at the Beach in Havana, Cuba

Scot SwanJuly 27, 2017
CubaTravel0 Comments 1
The following article is published in the #RGNNCuba Magazine: Vol. II, Summer 2017, produced during ROOSTERGNN Academy’s Travel Journalism & Photography Internship Seminar in Havana and Trinidad, Cuba, under the editorial direction of RGNN Expert and Mentor Benjamin Jones. Follow #RGNNCuba for all of our Cuba coverage.

I made my way over one of the narrow wooden bridges that separated me from the white sands of the beach that lay before me. As I was crossing, a calming ocean breeze greeted me and I looked out to see joyful families playing volleyball, people soaring their kites in the wind, and couples sipping rum from coconuts as they laid back on the public sunbeds shaded by a sea of umbrellas.

I had arrived at the Santa Maria Del Mar Beach after a scenic 30-minute ride from Havana, Cuba.

The Cuban capital is a very animated city with rickety old Fords, taxi bikes, and locals bustling through the packed streets. But as much as I have enjoyed the energy that courses through the veins of its close-knit neighborhoods, I felt the need to go somewhere more relaxing after being in the middle of it all for four days.

Whenever I need to take a break from city life back home in California I  always drive to one of the many beautiful beaches that line the West Coast, so I thought, what better way to escape the rambunctious urban environment than by heading out to the island nation’s seaside.

I wandered along the shore dipping my feet in the clear blue water; finally enjoying my breath of fresh air I began speaking to the locals as best I could. While it wasn’t anything like one of my more frequently visited beaches back home such as Newport, I was pleasantly surprised and it only cost me 20 CUC (around $20) to get there. The whole scene looked like something you would see on a postcard with the crystal clear turquoise water, the perfect palm trees reaching towards the ocean, and the white sand that seemingly went on for miles; it was surreal. 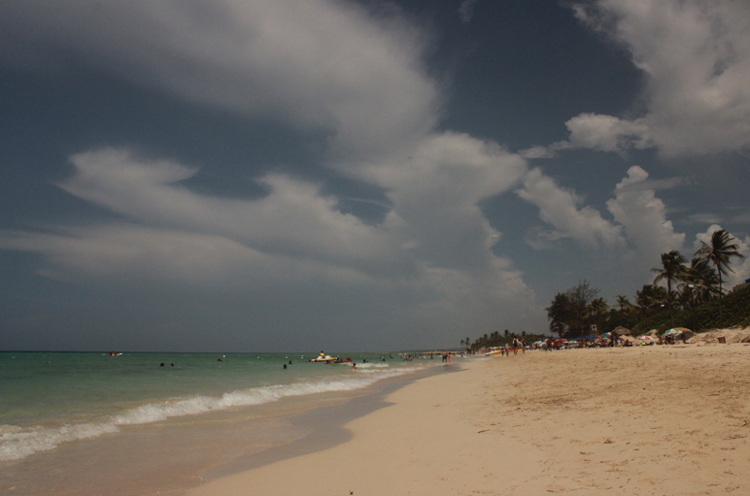 The beautiful Santa Maria del Mar beach stretches more than 10 miles along the island coastline however its white sand goes as far as the eye can see | Scot Swan.

Not too long after speaking to some of the beach goers I came across a friendly local man, Jordo, who showed me around and told me a little bit about the area. The English that he spoke was quite good and he informed me of a few things about his favorite beach.

“There are a few beachfront hotels that stretch along the shoreline that many people stay at, they are always busy it seems,” he explained. “Most people come here to party on the weekends but during the week it is a little calmer. This is my favorite place to come on the days I’m not working because I can always find something fun to do or new people to meet up with.”

Stretching over ten miles, there is plenty of space if you want to get away from the crowd here for a chance to sprawl out on the white sand under the palm trees, no matter what day it is. After introducing me to some of his friends, Jordo invited me to play a bit of volleyball and even though there were no nets we had a great time hitting the ball back and forth just steps from the warm waters of the Atlantic.

Santa Maria Del Mar has many great spots to check aside from the coast, and while I did not get to visit them all, the entrance to the beach alone has many places to grab a drink or a bite to eat. Some of the locals on the beach had also mentioned the Casa Club being a nice place to go and stay dry but keep the party going especially during the occasional tropical storm that rolls through from time to time.

Right near the entrance of the beach there are some great places where you can grab the freshest piña colada I have ever had for only 3 CUC and it even comes prepared in a large pineapple.

Aside from the Tropicoco Hotel, which Jordo had told me about, I learned of some of the other resorts at the Santa Maria after looking around. The Mirador Del Mar has by far the best view of any of the hotels there, overlooking most of the coast with plenty of palm trees swaying in the wind. Another good beachfront hotel, the Atlantico, which is closer to the main beach entrance, appeared to be booming with tourists who were all enjoying themselves. 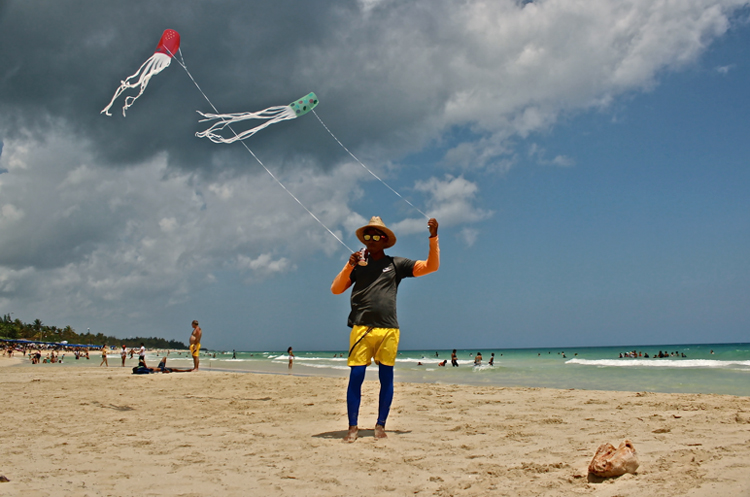 Flying high on the beach, a local Cuban man soars his kites through the ocean breeze | Scot Swan 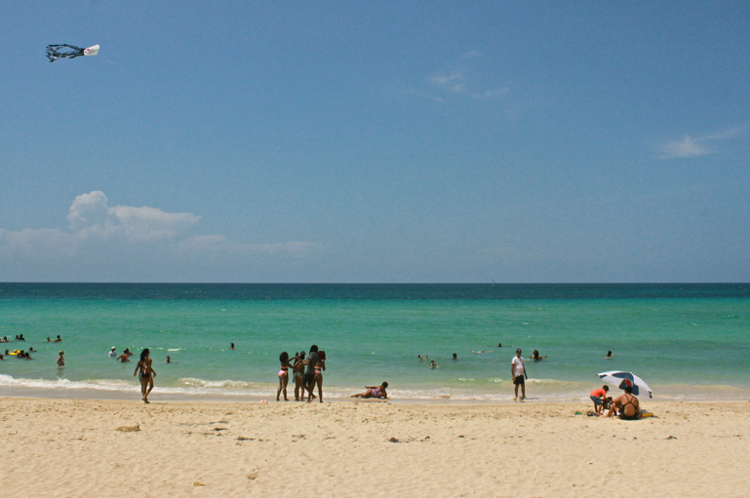 Later that afternoon one of Jordo’s friends mentioned that I should join them at Guanabo, a small beach-like town further down the road that evening for what he described as “delicious pizza” at El Picolo, a popular local eatery, but unfortunately I had to make my way back into the city of Havana.

I could have spent the entire day exploring this beach and hanging out with my new Cuban friends. I had no idea I would get to learn so much about Cuban culture in my day trip to the beach. I only hope I can return once more before leaving behind the many beautiful places I have seen on this island. 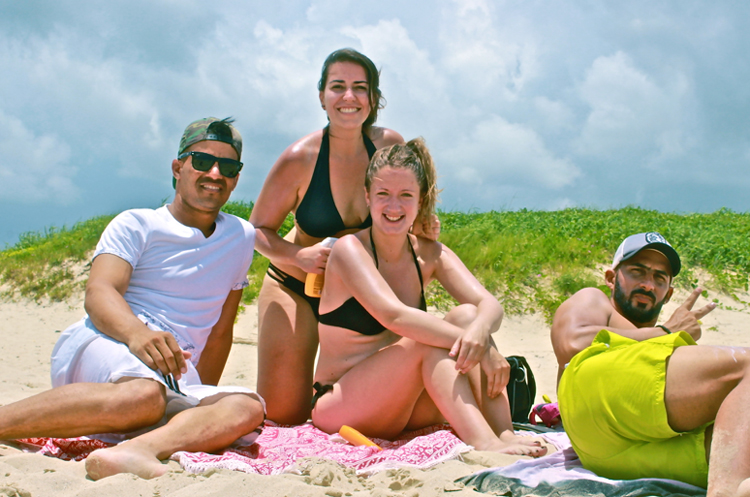 Hanging out on the beach with my new-found Spanish friends, Jordo pictured on the left | Scot Swan