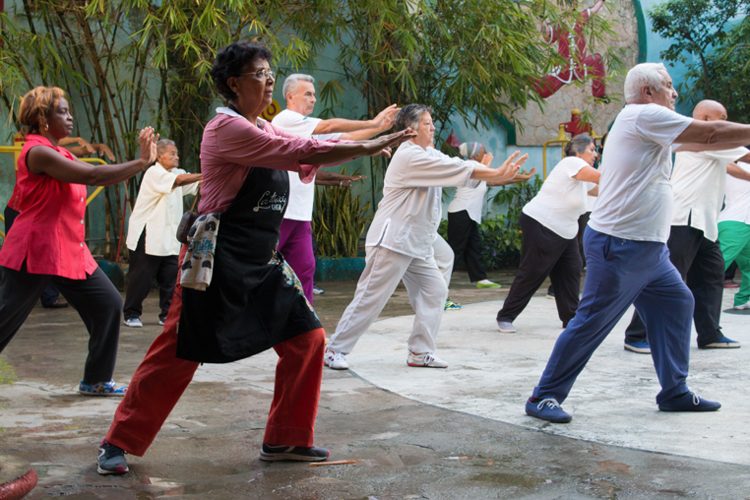 Lucy BurnhamsJuly 28, 2017
CubaTravel0 Comments 1
The following article is published in the #RGNNCuba Magazine: Vol. II, Summer 2017, produced during ROOSTERGNN Academy’s Travel Journalism & Photography Internship Seminar in Havana and Trinidad, Cuba, under the editorial direction of RGNN Expert and Mentor Benjamin Jones. Follow #RGNNCuba for all of our Cuba coverage.

The gong boomed through the low hum of chatter with two loud strikes and everything went quiet which signified the beginning of class. Women in colorful yin yang-clad silk outfits began to stretch as more crept in through the back.

The red, white, and blue Cuban flag was hoisted into the air, 30 students ranging from 12 to 70 stood at call and sang along to the national anthem in the background.  Shortly afterwards, the red and yellow Chinese flag was raised which they equally respected and sang to with pride. The 8:00 morning class had commenced at the Wushu School of Martial Arts.

Located in Havana’s El Barrio Chino, or Chinatown, Wushu has taught more than 8,000 students through its 21 years of existence. By walking through the red and yellow keyhole-shaped opening into the main courtyard, the environment transforms from the bustling streets outside and although packed with students and visitors, there is a sense of calmness.

The school is adamant on keeping up its strong sense of Chinese culture within a declining population of Chinese inhabitants, who once thronged this neighborhood at its peak. Cándida Guillen, an instructor at the School of Martial Arts spoke to me about her view of the neighborhood.

“It is sad because many traditions were lost when the Chinese population left,” said Guillen, “but this place [Wushu], this is where the Chinese culture is appreciated and practiced.”

Havana’s Barrio Chino is one of the largest in Latin America. The once large Asian population can be explained by the end of the slave trade in 1850 which left Cuba’s sugar cane and coffee plantations empty of workers, causing thousands of immigrants from countries all over Asia to immigrate to the then-Spanish colony.

At its largest, about 250,000 people lived in the neighborhood, many establishing their own small shops and eventually taking up ten blocks of Central Havana. The decline of the Asian population began in the 1960’s when many began to move to the United States seeing their businesses suffer after the Cuban Revolution.

Now only a skeleton of ornamental gates lead into what once was a booming neighborhood. Authentic Chinatown can still be found in an area named El Cuchillo de Zanja, which is comprised of the three streets: Cuchillo, Zanja, and San Nícolas.

Nirian Chang, a first generation immigrant from China, expressed her disappointment at the change of the neighborhood within the last ten years. Frustratingly, her voice heightened and her hands clenched when I asked her thoughts of the development.

“How can they call it Chinatown if there is not really any Chinese left?” she asked.

Chang’s father moved from Canton with her grandfather when he was 12 years old and was very involved within El Barrio Chino including becoming members of a Chinese association. To Chang, she never felt close to the neighborhood, “My father was from Canton but I was born a Cuban,”. Many Chinese descendants feel disconnected from their roots because of the lack of diversity within the neighborhood today, but an effort is being made to bring back tradition and authenticity to El Barrio de Chino.

“[The Association] has started to put on more events with the Chinese associations, like Mother’s Day and international Women’s Day to get more people active within El Barrio Chino,” said Chang, who recently attended the Women’s Day celebration with her sister.

The Cuban government has also played a role in rejuvenating the district since the 1990s, when they realized the tourism potential and began pumping in money and resources.

Guillen has hope for the future of the neighborhood and predicts that it is regaining the authenticity it once enjoyed. “I see it flourishing, we and other important businesses such as the House of Chinese art and Traditions within El Barrio Chino are working to rescue the culture that once was thriving,” said Guillen.

The neighborhood offers a change in scenery to the streets of central Havana, and in the case of Wushu, gives unique opportunities for Cubans. Even though Chang feels disconnected from her Chinese roots she stressed the importance of El Barrio  Chino to the integrity of the city, “it is the roots of what is Havana,” said Chang.

Out from under the bamboo shaded courtyard of the Wushu School of Martial Arts, the silk outfits are hung for another day’s class and the flags that once waved in union are lowered.

Stepping out through the opened pavilion, I find myself back in Havana, watching each class member come out of the meditative trance of Candida’s class and blend back into the Cuban lifestyle. Although they leave the barrio, they hold the connections to the culture Wushu is pushing to revive and are playing a big part in the preservation of the Chinese culture in Havana. 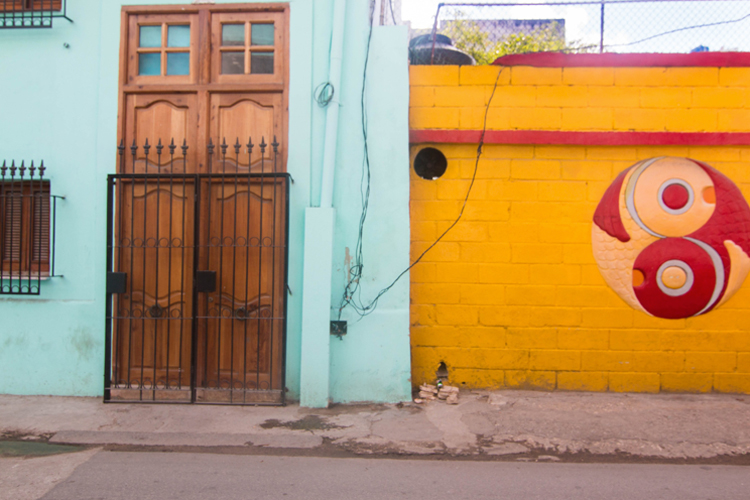 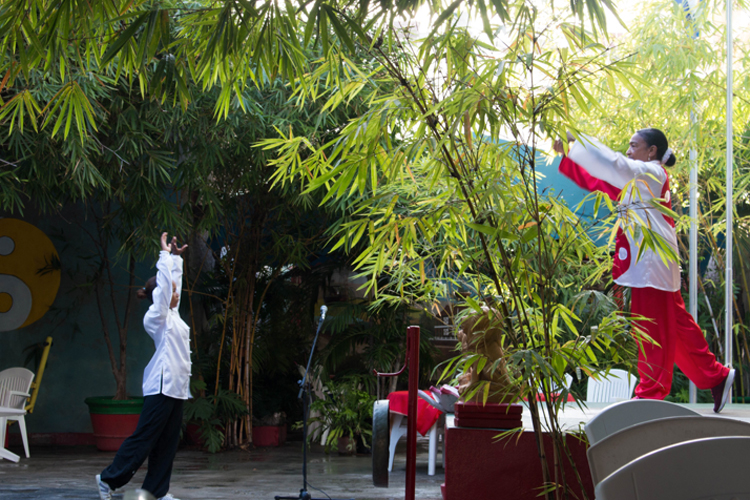