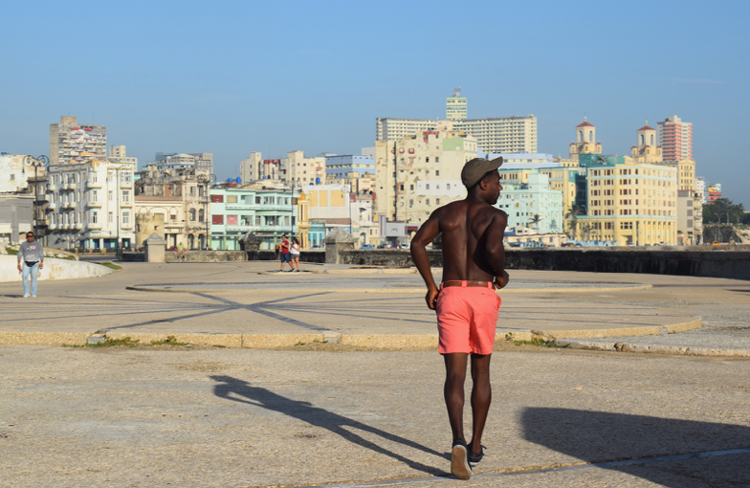 A Havana local whistles while running down the Malecón | Sophia Laws

Sophia LawsJuly 28, 2017
CubaTravel0 Comments 0
The following article is published in the #RGNNCuba Magazine: Vol. II, Summer 2017, produced during ROOSTERGNN Academy’s Travel Journalism & Photography Internship Seminar in Havana and Trinidad, Cuba, under the editorial direction of RGNN Expert and Mentor Benjamin Jones. Follow #RGNNCuba for all of our Cuba coverage.

Iblink at the exhaust from the cherry red 57’ Chevy that has blown into my eyes. In an effort to avoid the smelly cloud I veer to the left, a bad move as I am nearly taken out by a furiously honking bicycle taxi. Only minutes later a passing man hollers “Ayyy Mami! voy a correr contigo” (“I am going to run with you!”), despite this not being the first catcall, it still manages to catch me off guard, causing me to slip on a broken cobblestone and almost face plant into a pile of rubble. 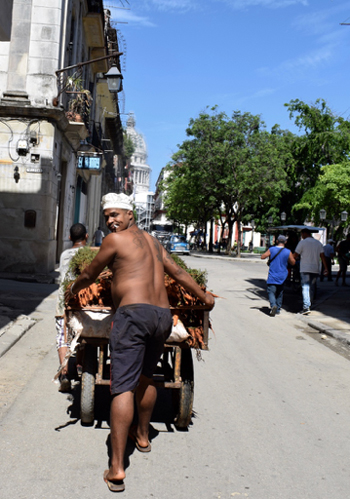 Running in the streets of Havana can solicit lots of attention, and is always an exercise in not running into anyone | Sophia Laws.

Running in the streets of Havana can solicit lots of attention, and is always an exercise in not running into anyone. Photo by Sophia Laws.

Chaotic indeed is my first attempt at running through the colorful and narrow streets of Havana, Cuba. As a college athlete, I have a certain weekly mileage I need to maintain over summer and exploring a new city while hitting my miles seems like a great deal. Unfortunately, I am greatly unprepared in where to run, what time of day to go, and what to expect on the streets.

Despite my sweaty, overstimulating first run, further trial and error supplemented by local wisdom, helps me to quickly gain some valuable knowledge for those hoping to lace up their shoes when visiting Cuba’s largest and most famous city.

Time of Day: When to Run

This is especially applicable during the summer months of June through August. To have an enjoyable run in Havana and not feel as though you are running in a sauna, going early in the morning is best. Despite the inconvenience of having to madrugar (wake up early), it is preferred by both locals and tourists such as Steve, a tall and lean tourist from Colorado, who is in the process of running 15 miles when I stop him to talk.

A daily runner with 37 marathons under his belt, he wipes the sweat from his eyes as he recommends “leaving even before the sun rises, around 5:45”. Similar to me, his first running experience in Havana left him “tired and dehydrated, that’s why I now get out early to beat the heat and humidity.” 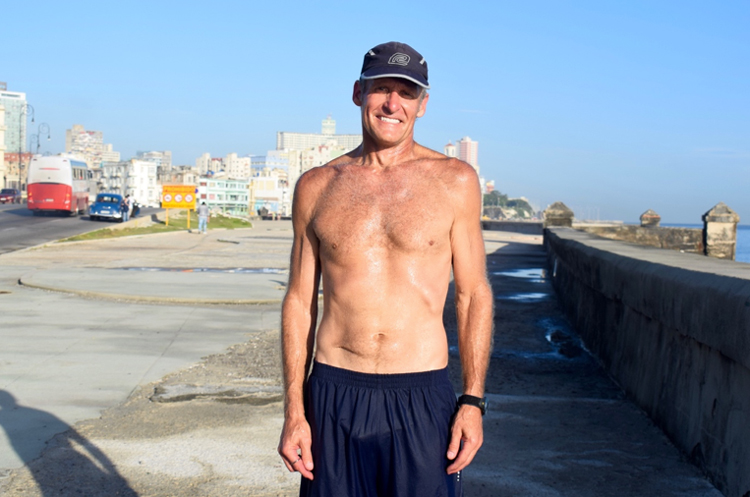 Steve, the Marathon runner from Colorado, combating the morning heat in his daily run along the Havana seafront | Sophia Laws

The danger of night running is not violence, Havana is very safe, but poorly lit streets that contain potholes, garbage heaps, puddles and other odds and ends (such as a goat carcass) that can be painful or annoying obstacles to a runner. Many parts of the historic city are not well lit at night, and twisting an ankle or getting lost could prove easy to do. Havana evening runs are characterized by whizzing cars, wandering pets and many a curious bystander. Running with music, for example might not be a good option once foot and vehicle traffic pick up because almost full attention is needed to safely move through the city. 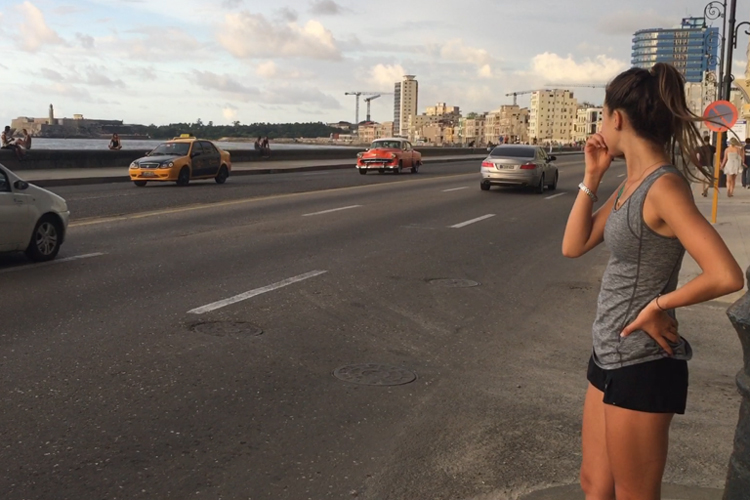 Waiting to make the treacherous dash across the Malecón highway, I look for a break in the speeding cars.

Location: Where to Go

The narrow Havana streets are unavoidable when running. I recommend bringing a copy of your accommodation address, about 10 or more CUC (about $10), and an internet-free navigation map of Cuba on your cellphone (I recommend Map.ME). As stunning as the avenues of Havana are, many streets appear very similar, and having the means to purchase a taxi or navigate is either a game changer or a good precaution. 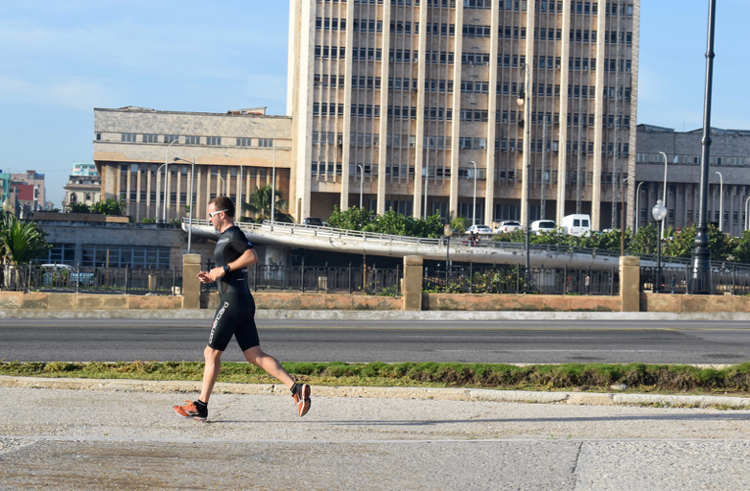 As far as recommendations go for the best running destinations around the area, the route I found most enjoyable and that came the most highly recommended was the Malecón, a five-mile pathway that snakes along the edge of the Havana seafront, paralleled by the Malecón freeway. The scenic route proves smoother running than the inner-city roads, and offers a view of both the ocean and the Havana skyline.

As a reward for the treacherous dash across the freeway, the Malecón is easy to follow for many miles. I saw a few people running on the street, but I would recommend staying on the walkway to avoid the multitude of colorful cars traveling at high speeds. The walkway is also popular with fisherman, friends and lovers alike who sit upon the border ledge and gaze into the sea.

An additional bonus of the Malecón is that across the street are important monuments, parks, and at the corner of Calle J, a Centro de Deportes (sports center) that has a dirt track and is one of the few places you can regularly see locals running laps.

“The Cuban people run a lot, run for the bus”.  The eighteen-year-old young man named Ariel laughs at his own joke when I ask him if running is a popular activity in Havana. A recent high school graduate and the son of a baker, he mentions that he has recently been exercising to lose weight, but prefers elliptical machines and calisthenics over outdoor running.

Ariel’s claim that “most people who run are from other countries”, seems true in the sense residents seem to prefer weights, boxing, dancing and other sports over jogging. It is perhaps the rarity of city runners that makes me feel under the spectacle of observant locals. For women especially, catcalls and stares, while harmless, can be an annoyance and deterrence to run.

These problems don’t stop Cuban women like 42-year-old Mariacarly, sporting a waist trainer and a friendly smile as she jogs down the famous path. Happy to talk she, says running is very important to her, “I do it for health and to stay in shape” she says, “in my opinion running is the most complete workout”. Although she acknowledges that running is not the most popular sport in Cuba, she says she has always felt safe on her runs through the city.

As I wipe the sweat and dust from my flushed face, the rush of endorphins reminds me that I love running. There is nothing like getting to know the atmosphere of a new city in such a unique way. Havana is not at fault for all the problems of my first run, just my lack of planning and knowledge. Don’t miss out on your sport of choice this vacation, just make sure to plan accordingly.