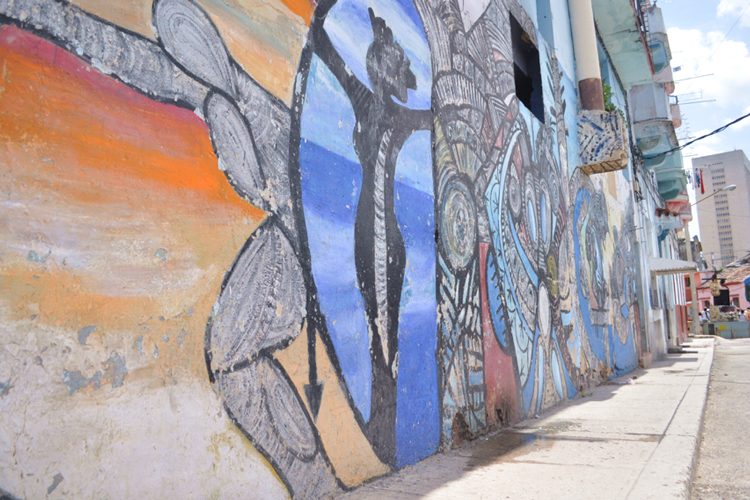 Crystal NunooJuly 29, 2017
CubaTravel1 Comment 1
The following article is published in the #RGNNCuba Magazine: Vol. II, Summer 2017, produced during ROOSTERGNN Academy’s Travel Journalism & Photography Internship Seminar in Havana and Trinidad, Cuba, under the editorial direction of RGNN Expert and Mentor Benjamin Jones. Follow #RGNNCuba for all of our Cuba coverage.

On any Havana street there are displays of modern cultural art that can’t be identified as just graffiti. It’s something more. A collage of treasured murals and sculptures are tied by a one-of-a-kind craftsmanship of striking pieces by Cuban artists. You can find these artistic expressions along the walls of public spaces and homes in the Cuban capital.

Once you’ve gotten over the sometimes gritty scenes of the city’s streets, you may find yourself in another realm of creativity where the canvas can be anything and everything. Where the gallery is not something held only inside a place but externally as well.

As we start to pull back the curtain that was once made of iron, you won’t see a fancy Louvre or a famous Metropolitan Museum of Art, but you’ll see Havana’s street art scene that bursts with Cuban creations. On one hand, the capital has many galleries like the two national museums on the island. One for the art of Cuba, and another for international artists, but Cuban art galleries are generally owned and operated by the government.

As a response to that, many people take advantage of the creative freedom to decorate the interior and exterior of the local neighborhoods. Photographer Elizabeth Rodriguez, 37, said, “It’s a way to show the art out of the galleries.” If residents of Cuba choose to design work for profit where they sell out of their homes they generally pay a tax.

Many of these pieces reflect a community that is stitched together by the different aspects of spiritually-inspired work mixed in with a politically-charged heritage with images of Cuban revolutionary leaders such as Ché Guevara, Jose Martí, and, of course, Fidel Castro. Also, you’ll also find patriotic images and fabrics that are the Cuban star scattered among doorways, jagged railings of balconies, homes, and markets.

Another thing to observe is the peculiar caricature of a white face and large eyes, sometimes split in two heads. These images appear in numerous areas around the city. Often these images are representations of what some might identify as ghosts. They appear on some of the walls as well as in smaller paintings.

All of these mystical and social/political aspects are etched in the makeup of proud Cuban culture that allows people to live amongst their art vivaciously. Muralist and sculptor Leo Martín of ­­­­­­­­Estudio de Leo would agree. “The reason people live with the art is that they’re highly educated and the culture is everywhere,” Martín said. 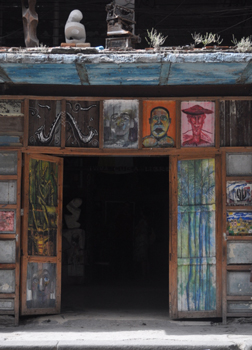 The 61-year-old artist’s studio is festooned with his work. Each work is stimulated by his inspiration from the movement in dance and he uses his talents to shape art that is a complement to the female body. “Everything I do has to do with movement, dance, and mainly the female body,” said Leo who has imprinted his technique of movement in his murals that he’s painted on various Havana streets with his signature located in the bottom corner.

One of the many reasons Martín became an artist is that it’s an inclusive profession. “It’s not an elitist thing to understand art,” he explained. Other visitors have experienced the generosity of Cuban street art. “You don’t have look for it. It’s here,” said Nguyen.

Martín’s portfolio consists of paintings that drape the walls of his magnetizing studio. His sculptures are set on tables and his murals are painted on the walls of several spots around Havana. In the corner of his art studio sits his favorite piece – One he would never sell called “Harmonia” or “Harmony”.

If you stop by Art Leo’s studio he often has what’s called peñas where he’ll host a day of activity at least once and sometimes twice a week. During these peñas he invites people and artists to share poetry, make paintings, and hold jam sessions with no formal structure. 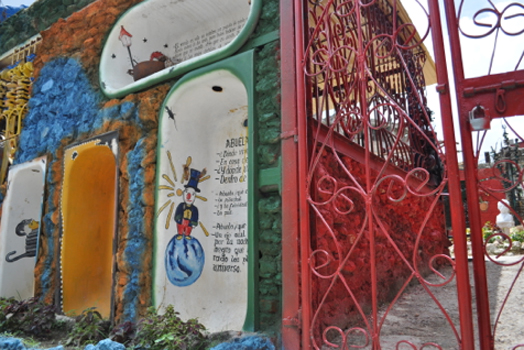 If you go down a couple blocks and step into the world of Callejon de Hamel in the central district, radiant colors of painted wall stories and sculptures might catch your wandering eye with the work by an artist known as Salvador.

Between Calles Hospital and San Francisco, the 69-year-old Cuban artist, Salvador, invites spiritually inspired designs that invoke a curiosity that trails down the alley of Callejon de Hamel. “My inspiration comes from African religion, the Caribbean and America,” he says. Down the trail of these energized creations awaits a gallery where you can not only purchase some of his pieces but also meet Salvador himself. 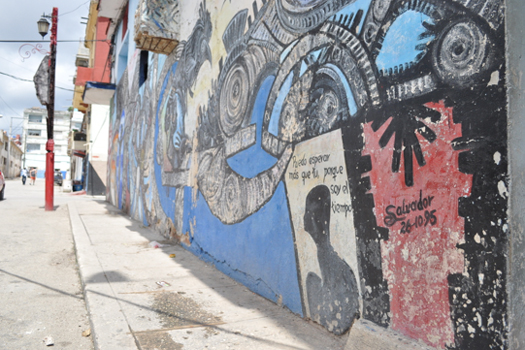 If you’re in a festive mood, Callejon de Hamel hosts a festival that is open to anyone on Sundays where they feature rumba dancing that enriches the colorful atmosphere. Although Callejon de Hamel is one way that vacationers can get their dose of Cuban art, there are several other resourceful ways to connect with culture in Havana.

As more and more people, especially Americans, take advantage of the Cuban experience, travelers notice the explosion of art happening in Havana and take interest in places like La Fabrica de Arte better known as La FAC. La FAC Incorporates a social relationship between artists of Havana, whether they be musicians, painters or filmmakers, and offers a ticket inside its space to join the party among Havana natives with an atmosphere where new travelers can share in the festivities.

Eboni, a 37-year-old American traveler, said: “I was overwhelmed by the art in a good way.” While visiting La F.A.C, she relates her experience, saying, “I’ve never been in a place where art meets music, meets a club atmosphere.” After exploring this lively environment, it’s hard to deny the words of the public relations and communications manager of La F.A.C, Ivan Vergara Odelin, who said, “Art gives equilibrium in life.”

Whether it’s outside or inside, modern Cuban art has become prevalent and necessary. Havana has made a home for diverse styles of art and embraced it in ways no one really has until now. As you arrive in this electrifying city, don’t be afraid to take part in its culture of bountiful creations that will change your preconceived notions about Havana.