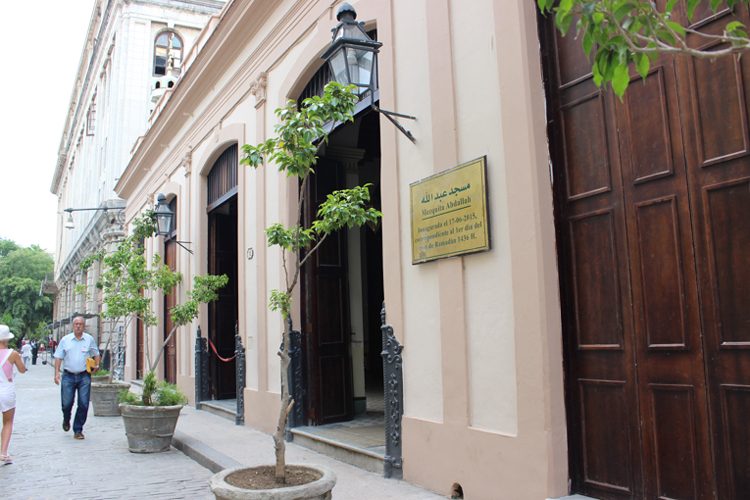 A Touch of the Middle East in Havana

Yafa DiasJuly 29, 2017
CubaTravel0 Comments 0
The following article is published in the #RGNNCuba Magazine: Vol. II, Summer 2017, produced during ROOSTERGNN Academy’s Travel Journalism & Photography Internship Seminar in Havana and Trinidad, Cuba, under the editorial direction of RGNN Expert and Mentor Benjamin Jones. Follow #RGNNCuba for all of our Cuba coverage.

As the call to the faithful was announced by the Imam, Cuban and foreign Muslims hurried to the doors of Masjid Abdullah mosque where they removed their shoes and placed them on shelves in the anteroom. It was prayer time at this island of Islam, a center for the vibrant Muslim community in Havana.

Masjid Abdullah was built in 2015, funded by Saudi Arabia. The mosque has holy Qurans in Arabic and Spanish for outsiders and native speakers to read from. Every Friday Islamic classes are given by the Imam Abdurrahman, 27 an Egyptian Muslim who has held the position for six months.

Outside of the religious facility, Julio Rodriguez, a 74-year-old guard, has been in charge of protecting the mosque during hours of prayer. The ornate, wooden doors remain closed until it is prayer time when the Imam opnes them and worshippers enter the prayer room decorated with Islamic calligraphy. 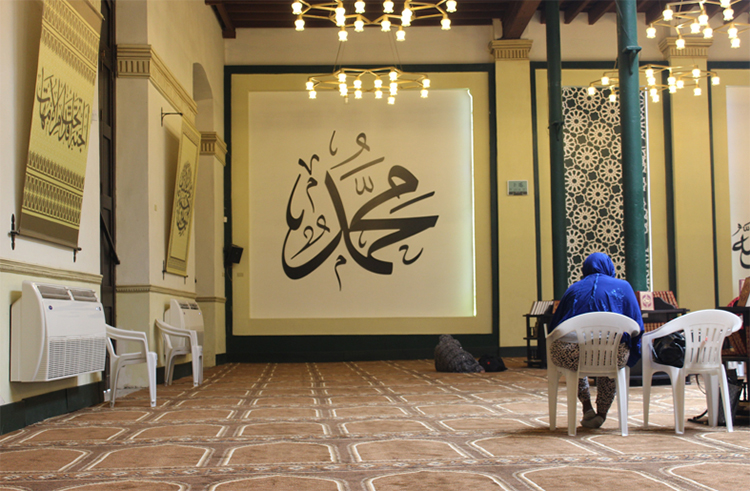 Arabic writing of the last prophet in Islam is painted on the walls (Muhammed PBHU) as well as the name of God (Allah). Within the middle of the mosque, long wooden pillars hold Qurans and translation books, as well as duaa blessing books.

Aisha Lopez, 22, a Cuban-Lebanese Muslim born in Havana, has been attending the newly-built mosque for a year. “The imam always comes over to the women’s side to answer women’s questions about Islam and the role of women within the religion,” she said.

Aisha’s father, a Cuban-Lebanese and her mother, a Cuban Christian, raised Aisha within the Christian religion. When Aisha was 17 years old, she converted to Islam because her friend in college would discuss and teach her about the religion. On her own she had read the Quran in Spanish and decided she would convert to Islam.

Muslim and Christian Middle Easterners immigrated to Cuba from the Ottoman Empire in the late 19th and early 20th centuries, with many becoming involved in the sugar and silk trades.  Santiago De Cuba is the second largest city located in the far east of the island where many Muslims also immigrated to and stayed.

Classes at the mosque are taught to all ages with adults and children learning about Islam, its prophets, principles of the religion and the Arabic language so Cuban Muslims can learn how to read the holy Quran in Arabic. 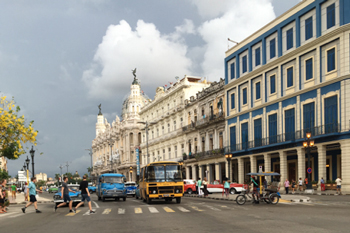 Directly across the street from the mosque stands an old building housing the Casa De Los Arabes, or The House of the Arabs, a museum which has been operating for 30 years and a popular spot for local Muslims and traveling Middle Easterners.

Kuwaiti jewelry box at the House of the Arabs. Photo by Yafa Dias

The museum has a garden feel and the moment visitors walk in, a big water fountain is the first thing they see. Towards the left, art work from Algeria with colorful textiles forms a larger floral design and ahead is a painting from Palestine. There are also items which were presented as gifts from the governments of Saudi Arabia, Morocco and Kuwait.

Magalys Montes De Clea, 58, who has worked as a tour guide at the museum for the past seven years said, “the museum has a total of ten workers, five in the office and five tour guides. Many of the art works were gifts and many came from Kuwait.”

The Kuwaiti gifts include crescent-shaped scimitars and swords with ornately decorated hilts of silver, gold and ivory, and beautifully-carved wooden chests inlaid with ivory and bits of colored wood. In one of the rooms, a Bedouin home is set up with mannequins dressed in traditional Kuwaiti clothes for men and women. On the right and left are Arabian style seating with pillows and rugs.

When asked what her favorite pieces were, Montes De Clea said, “I like the ones from Kuwait because the wooden pieces are detailed, cool, shiny, and have beautifully carved patterns within the wood.”

A few blocks away where old Havana meets the central district, is the Union Arabe De Cuba. This union was first established in 1919 with the name “Palestinian Arab Society,” it offered Arabic classes, radio programs and a library teaching Cubans about Palestinian culture. Over the years when more Arabs from the Levant countries immigrated to Cuba the name was changed to, “The Arab Union of Cuba.” 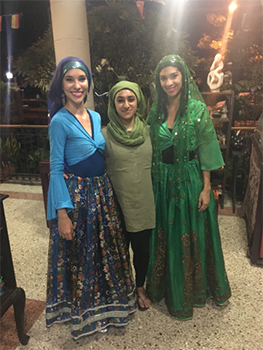 Two dancers pose with the author at Topoly | Benjamin Jones

Havana’s Middle Eastern  are attractions not only religious and artistic. In the Vedado district of the city is the Iranian restaurant called Topoly. The restaurant has a special dining area outside where customers can be seated at wooden chairs and tables or they can dine Iranian-style with legs crossed on a cushioned rug, while enjoying the surrounding garden and its bubbling fountain. Hanging above the dining area are bright mini-lanterns, gold bells and a Persian flag.

The restaurant serves up a unique selection of falafel, lamb burgers, beef kabob platters, sambouse, yogurt, Mediterranean salads and drinks. For a further Middle Eastern touch dinners can puff away on hookahs with flavored tobacco, while watching a pair of young Cuban women recreating Persian dances.

Havana offers many delights to visitors and who would have known these would include Middle Eastern religious and cultural attractions?