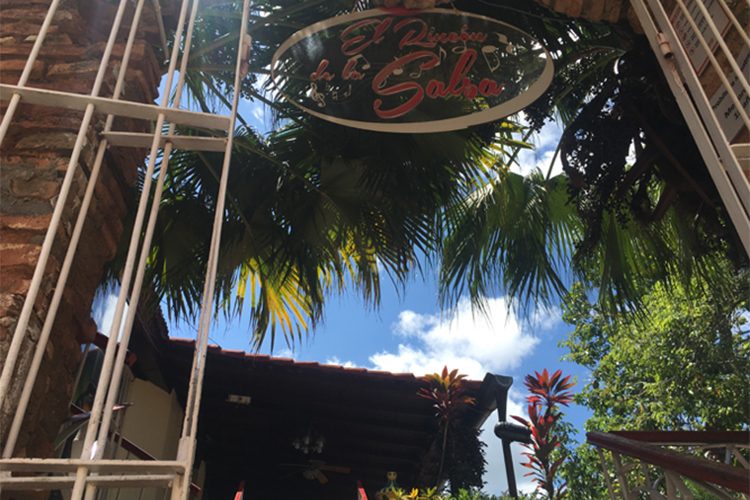 Katie BandishAugust 9, 2017
CubaTravel0 Comments 0
The following article is published in the #RGNNCuba Magazine: Vol. II, Summer 2017, produced during ROOSTERGNN Academy’s Travel Journalism & Photography Internship Seminar in Havana and Trinidad, Cuba, under the editorial direction of RGNN Expert and Mentor Benjamin Jones. Follow #RGNNCuba for all of our Cuba coverage.

A young girl, half of my size, asked if she could dance with me as she stared eagerly with big, brown puppy eyes. We were standing in the middle of Cespedes Park, in Trinidad, Cuba, which echoed with reggaeton from the DJ booth at the front of the square.

My new friend, Marina, who was a mere nine years old, told me to watch her as she was going to teach me how to dance. 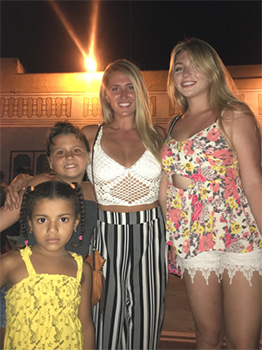 Left to right: Marina’s sister (in yellow), Marina, myself and Mattison in the center square at Cespedes Park | Katie Bandish

To my surprise, this young girl began to shake it better than Shakira and started moving her body in ways that I didn’t even think were possible. She began to stare at me as if I was able to mimic her movements but instead I awkwardly stared back and opted to a very basic shimmy, knowing that I had just been shown up on the dance floor by a kid.

Cespedes Park is a giant square that is lined with people from all ages, showcasing their dancing, whether it’s salsa, step dancing, or what Americans refer to as “twerking.” It seemed as though a lot of tweens flocked to this square, taking over the area and claiming it as their own party venue. This park seemed to be the hot spot to pregame at before the older spectators headed out to the local salsa bars such as La Casa de la Musica.

Warm and colorful lights beamed throughout a crowd as a male’s deep and rich voice bellowed over a plethora of instruments.

La Casa de la Musica is located off Plaza Mayor and greets you with a sweeping staircase that is flooded with people at night. The mix of locals and tourists makes it the perfect spot to take in the salsa shows, where you can find people smoking and drinking at tables or dancing in front of the stage where the band Semilla del Son plays vibrant salsa music.

Domingo Fernando Batis, 56, of Trinidad, is the lead singer of the band and has been playing with them for the past 20 years. His band seems to attract people off the streets to the venue. 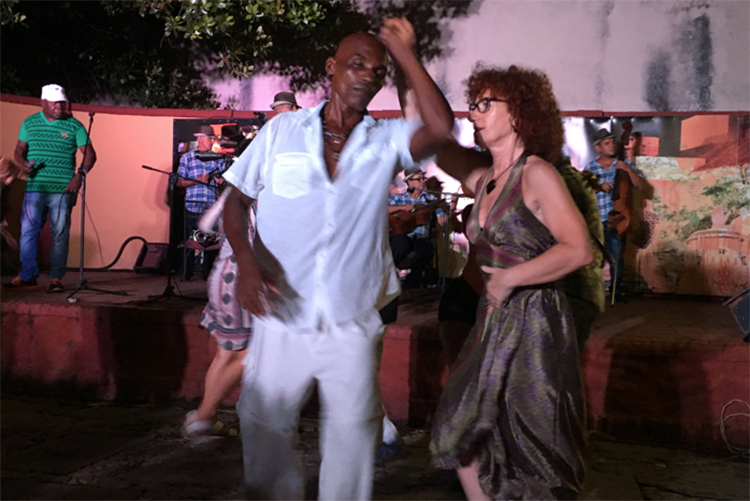 A man teaching a tourist how to salsa in front of the stage. Lead singer Batis is pictured left in the green T-shirt | Katie Bandish

After strutting off the dance floor, a tall and slender woman sat down on the spectator steps next to her friends. Laura Gravelle, 34, of Oregon had just flown into Cuba and was making the most of her time in Trinidad.

“We found La Casa de la Musica because we heard the band warming up off the streets and decided to come in and listen. We’ve been here the past two nights because of the live music and great atmosphere.”

No salsa experience is required to bust a move on the floor as dancers varied from novice to advanced. Locals took pleasure in asking people in the area to dance and led them through a series of shuffles and spins.

At one point, an older gentleman had asked me to dance with him, but I respectfully declined and watched him dance with Gravelle, as he awkwardly kicked and snapped his fingers, clearly not knowing what he was doing. Yet that was totally accepted amongst experienced dancers too.

Compared to Havana, Trinidad specializes in nightlife, with most places staying open until three in the morning. My next stop was El Rincón de la Salsa, which was illuminated by colorful lights wrapped around the trees in an outdoor garden setting.

The live band at this venue was a little more low-key, as patrons sat and enjoyed the music as opposed to the fast pace at La Casa de la Musica. Above the stage was a dinner style setting where you could enjoy a meal while watching the live music. The sign outside said you have to be 18 years old to enter but I think the rules are a little more lenient than the United States as I noticed a variety of ages.

While it seemed to have been a chiller environment at El Rincón, I think the atmosphere varies depending on who the featured band is, as I have passed it on prior nights when it seemed to have had more excitement. However, this was a nice place to wind down my night, sitting and enjoying the music as I desperately tried to avoid dripping buckets of sweat from dancing.

Whether I was shimmying at Cespedes Park with tweens, shuffling to salsa with the older crowd, or sitting and soaking in the ambiance at El Rincón, the nightlife in Trinidad does anything but disappoint. There is definitely a spot for anyone of all ages to enjoy the Cuban lifestyle and participate in the lively culture.