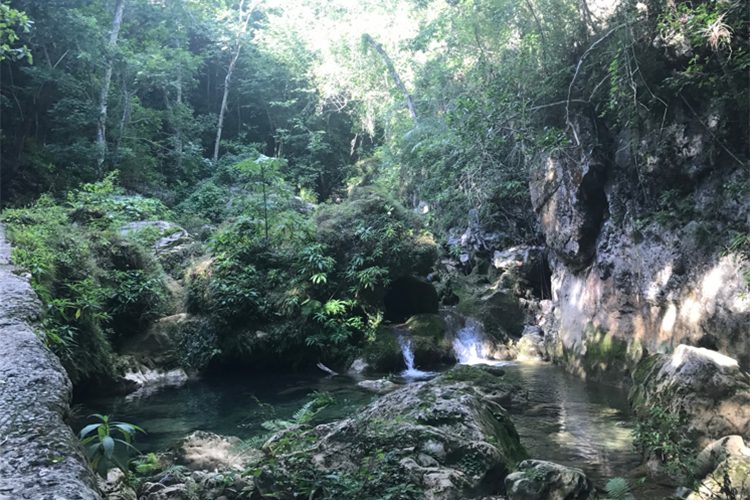 Bike-Hiking into the Trinidad Mountains

Theodore BodnarAugust 9, 2017
CubaTravel0 Comments 0
The following article is published in the #RGNNCuba Magazine: Vol. II, Summer 2017, produced during ROOSTERGNN Academy’s Travel Journalism & Photography Internship Seminar in Havana and Trinidad, Cuba, under the editorial direction of RGNN Expert and Mentor Benjamin Jones. Follow #RGNNCuba for all of our Cuba coverage.

Beaming hot rays scorched down on me as I took off on my mountain bike. Pedaling through the cobblestone streets of Trinidad, Cuba, I knew it was going to be a challenging ride to the Escambray Mountains. My English-speaking tour guide, Guillermo Guimenez de Luna pedaling at a brisk pace told me to try to keep up with him, but if needed I should tell him to slow down or stop to take a break.

Anyone who knows me well, is aware that I’ve been an athlete from a young age and never back down from a challenge, so I did my best to stay within a comfortable distance. While cycling to our eventual destination, he gave me a brief history of the local sugar industry, as well as the cowboy lifestyle of the people who live alongside the mountains. 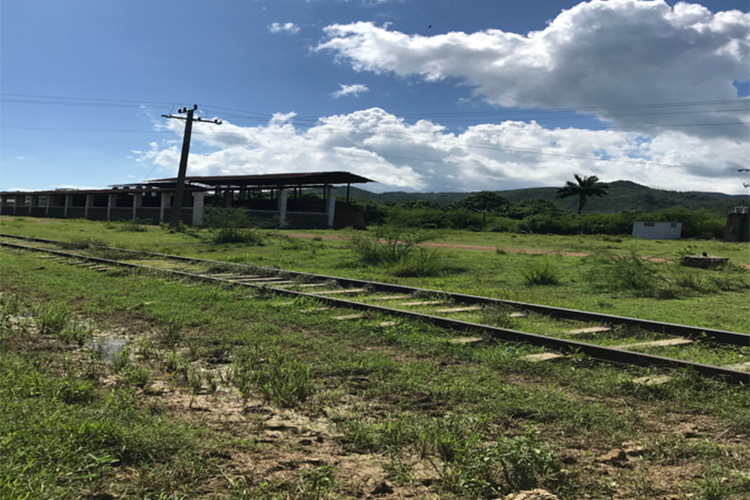 To those of you who are not experienced bike riders, I would strongly suggest to sharpen your skills before trying to do this expedition. The roads consisted of many rocky bumps which can send you into the air or throw you off balance if you don’t have good control of your bike. In addition to the rocky bumps, you also must manage puddles, cow manure, animals that frequently get in your way, and very narrow pathways with short acute turns.

However, if you can manage such obstacles the bike outing is very rewarding. Along the way you will see a wide range of farm life such as goats, cows, roosters, cats, and dogs. All of which bleat, moo, crow, meow and bark as you bike past.

As well as seeing the animals, I also got to see many of the farmers teaching their offspring the everyday tedious tasks. I was told by Guillermo that many of the children begin helping out their parents at very young ages, some as young as nine years old.

Gimenez de Luna has many friends along the path and we were frequently greeted by those we passed. 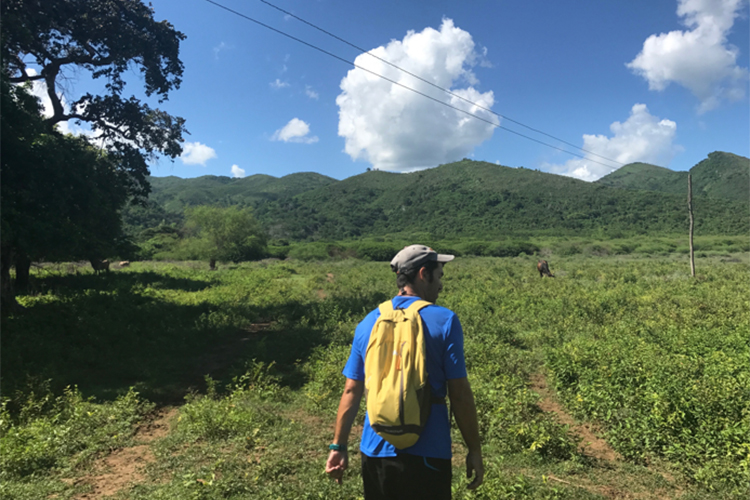 My tour guide as we set out to the mountains. | Theodore Bodnar

After the hour-long bike ride, I was relieved to finally be on my feet and walking. The trip up the trail began with us putting our bikes away at one of the farms where my guide had friends.

“I have been doing this for five years now and as time goes by you get to know the people who you bike past quite well,” he said. “Trinidad is not a big place, so you also see these people when they go into city and become friendly with them.”

As I started my journey up the mountain with sweat dripping down my back, I was thankful that I didn’t have to work in these grueling conditions. Walking up this 15-minute steep hill, Gimenez de Luna said this is usually the worst part, but after this he swore it gets “beautiful.”

While in the mountain it got significantly cooler when we were covered in the shade of the bushy trees. In the highland, we heard many noises, some worrying, others soothing and relaxing. During our walk, we heard frogs and crickets singing at deafening levels and at one point I had to close my ears to think. Continuing along we also heard the gentle streams of water which helped me relax. 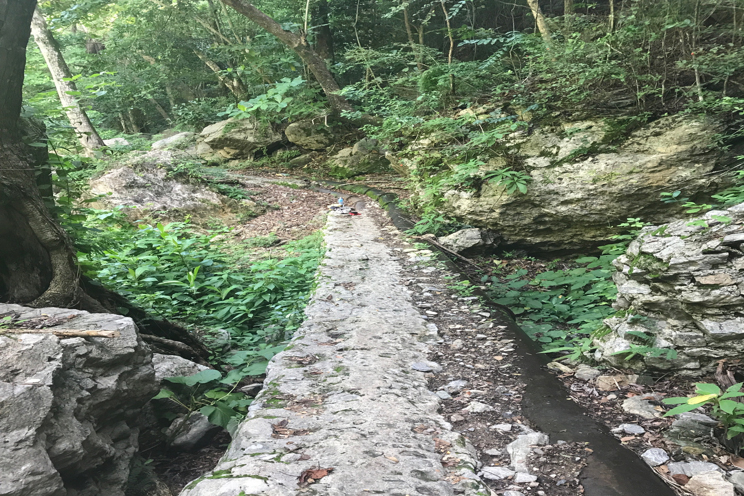 A narrow rocky path next to a calming stream. | Theodore Bodnar

Another unusual aspect to this hike compared to the ones I’ve been on in the States was seeing herds of cattle along the trail. To my surprise the animals were composed and didn’t mind being talked to and petted. My guide told me that the animals were all domesticated and it was a common thing for them to see hikers in the mountains.

After the hour-and-a-half long trek we finally arrived at the main attraction, the waterfall known as Javira, where we swam and talked for a time, and when I got to know Gimenez de Luna more. He told me that he started the business to support his family after the birth of his second child. Originally from Spain, he also explained that while it was at first difficult to adapt to the Cuban lifestyle, that he had learned to love the simplicity of it of the country and its people. 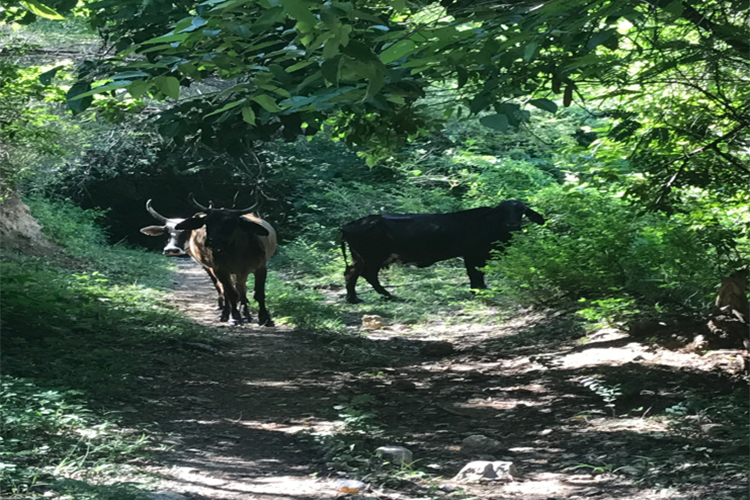 My favorite part about the waterfall was that it rejuvenated my spirit and energy for the long hike/bike ride back. Also at the waterfall I got a chance to experience small fishes which quite literally ate my skin. In order for this to happen  my guide enlightened me that you must sit quietly for about two or three minutes and then they will come and exfoliate your skin. They zapped me the first two times and then I got used to it, and at the end there were a dozen nibbling at my body.

On the journey back from the hike, I reflected on the tough challenge that everyday farm workers and animals have to endure on a daily basis. I remember thinking how fortunate I was to not be living in these conditions. The trail was one of the toughest ones I’ve done, and I will always be proud to say I completed the circuit.