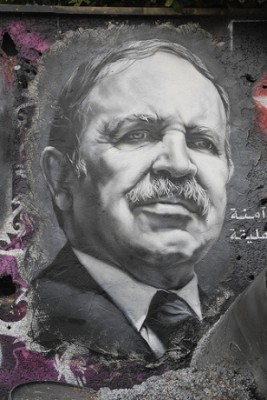 ALGERIA. President Abdelaziz Bouteflika is known in Algerian society as the man who ended the decade-long civil war and lifted the 19-year state of emergency. But is this enough for him to win a fourth presidential term in 2014? Or will he resort to subversive tactics to guarantee a sure victory?

The 2012 Democracy Index has categorized Algeria as an authoritarian regime, and the 2013 Freedom of Press Report labeled it as “not free;” so it does not really come as a surprise that Bouteflika has ensured his stay in office through means other than democratic and fair elections.

During his 15 years in power, President Bouteflika has been smart enough to limit the army’s involvement in the political arena. He has also increased his control over the state apparatus and improved Algerian foreign relations.

Most importantly, in 2008 Bouteflika endorsed an amendment to the Constitution removing the presidential term limit, allowing the President to run for office indefinitely.

Since Algeria gained its independence from France in 1962, the military has been the strongest state organization in Algeria, with the head of state operating as an appointed figure head.

Like his predecessors, Bouteflika was chosen and supported by the military. He ran unopposed for his first term in 1999 and won 74% of the votes after all other candidates, alleging fraud, withdrew from the elections. In the following years, the balance of power shifted towards the presidency and away from the army.

The military generals declared neutrality during the 2004 presidential elections. Additionally, the former single FLN party backed opposition candidate Ali Benflis while President Bouteflika was surrounded by unprecedented criticism. The conditions for open and free elections were put into place. Nevertheless, the elections were said to be fraudulent, and Bouteflika gained his second term with an even greater majority of 85%.

The 2008 constitutional amendment, which came into force only after the salaries of the members of Parliament were doubled, allowed him to run for a third time in 2009. The army did not try to exert any control over the elections, as many generals accepted withdrawal from the political arena in exchange for their children’s control over Algeria’s largest businesses.

The United Nations, the United States, the European Union and the Organization for Security and Co-Operation in Europe all sent observers to the 1999 and 2004 elections. After not being able to prevent fraud, they decided not to participate in the 2009 elections, which were referred to as a “pathetic circus” by opposition leader Said Saadi.

The 2009 figures were far too high to be credible. There was a turnout of 74.5% on Election Day, and Bouteflika won 90.24% of the votes. A confidential cable from the U.S. Embassy in Algeria – later published on WikiLeaks – said the 2009 elections were “carefully choreographed and heavily controlled with the official turnout figure exaggerated by at least 45%,” pointing to a more realistic turnout of 25-30%.

The situation highlights the irrelevance and weakness of opposition parties in Algeria as well as the insecurity of the government. Faced with the fear of an electoral boycott, Bouteflika paid a lot of attention to voters and staged high rate participation in order to maintain international legitimacy.

Now, after 15 years in power and with deteriorating health, 76-year-old President Bouteflika announced he would run for a fourth term in office.

The opposition called for an electoral boycott after Bouteflika announced his candidacy, saying elections would not be fair with him running. But unlike the 2009 elections, the Islamist movement no longer has the same influence over Algerian society, so its abstention might not have an impact on the elections.

The three opposition parties – RCD movement, Islamist MSP party and Ennahda party – pose no real challenge to the ruling FLN party, which supports Bouteflika in the upcoming elections. The President has almost ensured his re-election.

But will a victory in itself be enough for Bouteflika, or will he, once again, orchestrate high voter turnout and even higher popular support?

The 2014 election results could be a genuine step towards democracy, but they could also end up being a democratic charade as they were back in 2009.