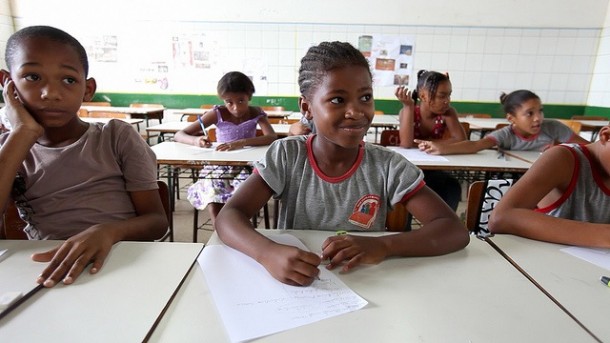 SERIES: Education | What to Do With(out) Education in Brazil?

[translations idioma=”ES” url=”https://archives.rgnn.org/2014/04/04/serie-educacion-que-hacer-consin-educacion-en-brasil/”]
Under the motto, “Education is the key,” ROOSTERGNN is publishing a Special Series dedicated exclusively to one of the most important topics defining our society of today: Education. View the complete series here.

BRAZIL. When Brazilians are questioned about what needs to be done to move forward, it is virtually consensus: “improving education,” an answer that might even sound as cliché as saying “ending corruption”. Nevertheless, education is the key factor for the development of Brazil, a country that already proved to be an economic power, despite its internal social deficiencies.

Regardless of being the seventh biggest economy in the world, Brazil was rated the 58th, 55th and 59th country in PISA’s ranking– Programme for International Student Assessment – for the disciplines of math, reading and science, respectively (among 65 countries). Furthermore, according to UNESCO, Brazil is the 8th country with the largest number of illiterate adults, with the sum of 14 million individuals – 38% of Latin American adult illiterates.

6.1%, the investment in education over the GDP in 2012, shows, however, that despite such gap between Brazil and other economic powers from the first world, this number has increased, up from 4.7% in 2000. In 1994, President Cardoso released an educational reform program, kept by the following presidents, that ensures 93% of the population has access to basic public education. In 2012, Maria Helena Guimarães de Castro, from The Global Search For Education, helped the federal government launch a national program to improve literacy for children in the beginning of primary level, with more than 5,500 municipalities engaged in the project.

Nevertheless, there are still many improvements and many realities to be changed in Brazilian society, a palpable demand that came to a head during the 2013 protests. The protests of June showed how people were unhappy about the educational situation in the country – lots of posters requested the replacement of 2014 World Cup Stadiums by new schools, as well as the application of FIFA standards in schools, other than only in soccer stadiums.

People are aware that the salaries of the professors in the public system (US$710.80) is one of the lowest if compared to any other wage in Brazil or to remuneration of school professors in other countries.

Also, there remains the problem of infrastructure. In some regions, like the Amazon, it is not even possible for kids to physical attend schools. Where they can, however, there sometimes is no food available, and the basic instruments for kids’ learning are lacking. And when kids are there, their professor might be absent, adding to the notion of academic consistency and discipline.

In 2012, Isadora Faber, 13 and from Florianópolis, created a Facebook page, where she could mobilize other students to change the situation in the public school they attended. Denouncing infrastructure issues, like bare wires inside classrooms, cancelled classes and poor food conditions, she faced censorship attempts and even staff bullying. But the student had the support from her parents and friends.

“Just because it’s a public school doesn’t mean that it can’t provide quality education. Everyone deserves the same. At the end of the month, everyone pays a little, an amount that goes to public education”, Isadora declared to UOL, whose efforts have developed into a NGO for the improvement of education in Brazil.

The most optimistic may believe that education and social development will follow the economic growth and the international inclusion Brazil has enjoyed in recent years. The most skeptical, though, may begin to enroll their children in private schools, which seems to be a short-term solution for education, in Brazil. One way or another, it is a fact that the situation has to change: Brazil will not become a global leader if education doesn’t become a priority.

There is already a consensus in the streets. But the question remains: Can this rising sun economy maintain its growth without investment in education?