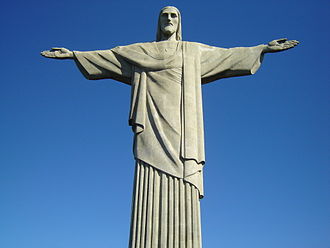 If you do a google search of the word “Brazil” and scroll past the maps and images of the Brazilian flag which will pop up you will find the first photograph which comes from the google search to be a photo of the statue Christ the Redeemer. Located in Rio de Janeiro Brazil, Christ the Redeemer has become the symbol of Brazil. If you watched the World Cup last year you likely saw the image of the statue more times than any of the individual players on the TV. Christ the Redeemer is the second largest Christ statue in the world and also was named in 2007 one of the new wonders of the world. The statue is of Jesus with his arms outstretched as if to embrace the city of Rio de Janeiro. The statue stands at 92 feet (28 meters) in height with a pedestal 26 feet (8 meters high). The statue was designed by French designer Paul Landowki. The statue is made of reinforced concrete with thousands of soapstone tiles.
In 1921 the Catholic Church in Brazil proposed a statue on one of the mountains surrounding Rio de Janeiro. The government gave permission and Mount Corcovado was chosen as the location for the statue as a result of its amazing view of the city. Work began with the placement of the foundation stone on Brazil’s day of independence 4, April 1922. A contest was held to choose a design for the statue with the winner being Paul Landowki though the design was originally the image of Christ with his arms outstretched was meant to also have items in his hands. Construction of the actual statue started on in 1926 and the statue was dedicated on October 12, 1931. To bring stones and other materials to the summit a pre-existing by a lift that had been made previously to help tourists reach the summit, as the commit is noted as having one of the best views of the city. During construction there were no fatalities or serious injuries reported. Some said that the construction was thus blessed.
Today the statue needs to go through constant repairs as, because of the high location of the statue, the statue is constantly buffeted by the elements and has been hit on several occasions by lightning. The most recent repair work was done before the World Cup. As time goes on however the statue has become darker in color as a result of difficulties finding identical materials to build from. If the statue does not receive constant attention it will not last long. This means that there is the possibility that, as politics and economics change in Rio that the statue could be left alone and then it will be destroyed.
However that is unlikely to happen any time soon as millions have visited the statue. I had the opportunity to visit the statue in 2007 and I thought the statue was quite an impressive site with its unique take on Jesus, a person that has been depicted in every form of art imaginable. If you have the chance visit the statue and make sure you have your camera because photos from the mountain peak are stunning.