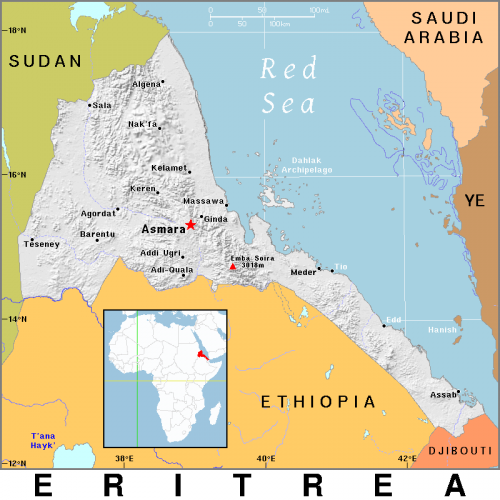 Thousands of young Eritreans are driven each year from their country by an ill-conceived system of national service that effectively enslaves them for arbitrary periods to a military class.

As the 22nd anniversary of its Independence approaches, Eritrea is facing the loss of five per cent of its population, more than 320,000 people according to the United Nations High Commissioner for Refugees (UNHCR), who preferred fleeing the country rather than living under the oppression of a dictatorial regime.

In 1993, after the end of a grueling 30-year war against Ethiopia, Eritrea proclaimed its Independence. The government, led by the former guerrilla leader Isaias Afewerki, instituted a mandatory national service for all citizens below 50 years of age in order to protect and restore the country.

As a result of continuing border disputes between Eritrea and its former occupier Ethiopia, the 18-month period of mandatory national service was extended to an indeterminate period. Conscripts serve in the army, work on national development projects, or are loaned to private firms controlled by army officers. Their remuneration is 450 nafka (30 USD) per month, a wage that hardly covers basic necessities. Consequently, a gray economy has grown around this immense source of free labor in which officers frequently behave like slave-owners.

In 1998, with the beginning of new conflicts with Ethiopia, preparations for military recruitment were hastened as students were transported from schools to military camps. Hagos (not his real name), an Eritrean refugee currently living in the Netherlands, was one of them. He started his 6-month training when he was 17, and soon found himself imprisoned in a mandatory conscription which was extended indefinitely.

“In the beginning it is not a big deal, you are young and you think that the war will come to an end soon and so will your national service” he says. It took him a couple of years to realize how naive his thoughts were.

“You live in a prison, all of your actions are controlled by the government, you work everyday and yet you have no money”.

In an oppressive regime spying amongst companions is part of daily life. It took him years to finally mention the word “escape” among his dearest friends.

To forestall desertion the government does not allow young people to travel across the country without permission. Roadblocks are everywhere and it not uncommon for police officers to arrest those who are unable to produce the appropriate documentation.

Hagos, who was deployed as a police officer, had the ability to travel, drawing up maps of roadblocks in his mind so that, when the time came, he knew exactly how to go.

One August evening, at sunset, he set out with two friends on a journey that would eventually take him to Europe. It was a night of nonstop walking. Around 5 AM they arrived at the border, waited for the sun to rise, and scurried across the mountains to Sudan.

They continued their escape through the forests until reaching the capital Khartoum. Here they were halted by the police who confiscated their money and sent them to a refugee camp. With  money sent by his brother, Hagos was able to pay smugglers who brought them to Libya. They crossed the desert, first in a truck loaded with fugitives (Hagos counted 107), and then separated in smaller groups and continued their journey through the desert onboard a pickup truck.

When crossing the desert the pickup lost its way and a journey that was supposed to take only a couple of days lasted twelve. “We ran out of water and food. People started fights to get the last drop of water. Thirty of us died on those pick-ups and were buried in the desert”.

The Eritrean government abolished all independent press in 1993. UN observers were denied access to the country, rendering investigations into allegations of corruption and abuse impossible. It is one of the most secretive nations of the world, on a par with North Korea. By interviewing refugees, mainly in European countries, organizations like Amnesty International and Human Rights Watch have collected trustworthy and cross-checked testimonials of widespread human rights violations.

Many men and women who try to flee are shot at the borders or die later as victims of human trafficking organizations. Nevertheless they continue to accept these risks, and the hardships of the escape route through the Sahel to the Libyan coast, rather than remaining in a country where basic human rights have lost all meaning.

Because of the high risk of their being jailed and tortured when sent back to Eritrea, deserters are usually able to obtain political asylum in countries that have signed the UN Declaration of Rights. In fact, more than 80% of these refugees succeed in obtaining asylum in Western countries.

“Far from serving the goals it was to achieve, mandatory national service caused an exodus of the young.” says Hagos. “You can imagine the consequences for the economy and stability of the country. In the war with Ethiopia, Eritreans of all ages and both sexes volunteered for a bloody warfare. We must now risk our lives in order to escape from our own army. “