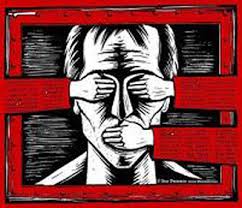 Two years after former prime minister Silvio Berlusconi was banned from Parliament, the status of the freedom of press in Italy still scores really low if compared with the other members of the European Union. In 2015 the Freedom of Press organization ranked the freedom of press in Italy as partially free. Berlusconi no longer completely dominates Italy’s media, but one of his most efficient  weapons to stifle his critics is still there, ready to be used by him and by his successors in power alike. It is a law that stems directly from the fascist era and is still being applied for the same ends as for which it was designed.

As a dictator Mussolini was well aware of the fact that control of information was a necessary condition for controlling the state, so he set about to undermine all existing freedom of speech and press. For this purpose the fascist government introduced a defamation law, nominally created to protect the reputation of Italian citizens, that turned out a particularly effective tool to muzzle political opponents and detractors of his regime, threatening severe penalties, even imprisonment for defamation (meaning each public offence, also when true).

After Italy had become a democracy, post-war governments succeeded somehow to forget for more than 50 years to review certain laws, even though they were hardly compatible with basic democratic principles like  freedom of speech and freedom of press. The defamation law remained in force as a mighty and frequently invoked weapon in the hands of the political class.

Berlusconi’s enormous legal staff (two of them senators) wielded Mussolini’s defamation law with success against the few Italian media that had remained in the hands of adversaries of the Forza Italia party.

An emblematic case was that of 2001 when host Daniele Luttazzi of the TV show Satyricon spoke with  investigative journalist Marco Travaglio who had written a book, The Smell of Money, about the ways in which Berlusconi had made his fortune, including the prime minister’s alleged (but well-documented) connections with the mafia.

The reaction was immediate, Berlusconi denounced the interview as defamatory and had Luttazzi banned from state-owned TV shows and Satyricon suspended. Berlusconi’s men filed claims for a total of over 30 million euro.

In a country in which laws are interpreted and applied in roughly the same way as religious texts by fundamentalists, the law on defamation (art. 594 of the penal code) has allowed numerous politicians to protect their interests with draconian means.

A recent case (2012) saw Orfeo Donatini and Tiziano Marson, reporter and editor respectively of the daily Alto Adige being accused of criminal defamation and subsequently sentenced to four months of prison for having written and published an article on a provincial council member who had participated in a neo-Nazi summit. What is peculiar about the case is that the information came from a police report and was legally obtained and published.

These and numerous other cases caught the attention of organizations like the UN Human Right Committee and  the Committee to protect Journalists, who repeatedly urged the Italian government to review the law and decriminalize defamation as it was considered incompatible with basic democratic values.

In September 2014 the Italian Senate approved a revised defamation bill  in which imprisonment was abolished as a sanction for defamation. However, it introduced new punishing regulations that certainly did not reduce the intimidating effect on the press. Journalists continue to be legally and effectively deterred from reporting on political corruption and organized crime.

The law was extended from  the press to other communication media like internet, radio and television. If defamation is proven, it requires rectification of the information published as well as the ‘right to oblivion’, meaning that all information considered defamatory must be removed from the web, even from search engines. The bill lacks any effective deterrent to prevent abuse of the law by any person who has something to hide and money enough to start a procedure.

Contrary to countries as the United States where the threshold is higher and sanctions for defamation are lower when the accused is a politician, the Italian law stipulates higher penalties if the victim is a member of a political, administrative or judicial body.

The right of information is essential for informing citizens about the actions of politicians and public organizations. In Italy, however, the law does not warrant access to information, but, on the contrary, provides powerful and rich men with laws and procedures that effectively scare journalists away from mentioning proven facts.  In a country where in their role of watchdogs journalists should report on sprawling political corruption and organized crime, they are censoring themselves for fear of legal repercussion and losing their job.