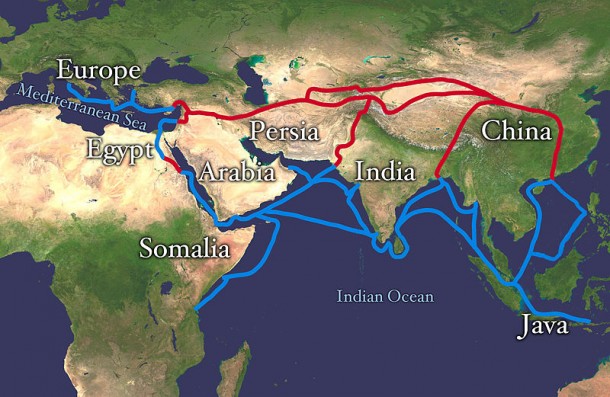 The history of the mysterious and often romanticized Silk Road has long been generalized as ancient China’s trade networks with Eurasia. It is said that through intense commercial exchanges, various cultures on the Silk Road route were able to flourish and sustain for centuries even during Europe’s dark ages and medieval periods. Fantasies of dazzling bazaars and camel-ridden merchants crossing the deserts abound, yet for those who had travelled the Silk Road and those yet to take upon the journey in the 21st century, the route is far more complex than what is on the surface.

Since the Chinese President Xi Jinping proposed a new Silk Road Economic Belt in 2013, huge government projects seeking to link Asia all the way to Africa have started again. Only this time, there is not only a vision for the New Silk Road but also one for the Maritime Silk Road – a vision for an intensification of global communications and exchange.

The Silk Road seems to evoke nostalgia for a bygone era that has been obscured and even left to oblivion at the turn of the century when Western colonists started to engage in direct maritime trade with Asia. Nonetheless, many scholars on the Silk Road now hold the view that the Silk Road has never died despite Eurasia’s loss of its geopolitical significance. James A. Millward, Professor of Intersocietal History at Georgetown University, is the author of The Silk Road: A Very Short Introduction. Millward explains that the Silk Road symbolizes not only the movement and convergence of trade but also peoples, technologies and arts across nations, kingdoms and empires on the route.

The idea that the Silk Road encompasses all these facets indicates the scale of the New Silk Road project. Giant government projects mean levels of bureaucracy, which sometimes lead to a shortage of finance, time and supervision for completion. However, China seems to already have a head start. In the month of May alone, President Xi visited major Central Asian countries on the Silk Road, signing high-speed rail agreements with Russia and Kazakhstan while giving big funds for infrastructure to Pakistan. Most recently, according to a report from the Wall Street Daily, China has created a $16 billion Gold Fund to facilitate Silk Road member states’ increase of gold holdings.

All these big initiatives point to China’s intention to further raise its international status. While certain countries such as Pakistan and Belarus are friendly partners, states that are willing to sign agreements and deals, others are more unpredictable in what kind of economic and political prerequisites they will ask for. Given the long distance of the Silk Road land route alone (from the West of Xinjiang Province, China to Venice, Italy), it is unlikely that China could lead the entire project without giving away some of its responsibilities to member states.

For all the controversies arising out of the Silk Road project, Eurasia will indeed get a chance to develop and reap benefits out of strategic negotiations with China. By contributing its locally rich natural resources such as oil, gas, copper and coal mines, Eurasia will have the leverage to ask for more modernized infrastructure within their countries. As for how the ambitious Silk Road project will play out, a struggle for regional power is likely to ensue, but so is an even more intensified global connectivity.