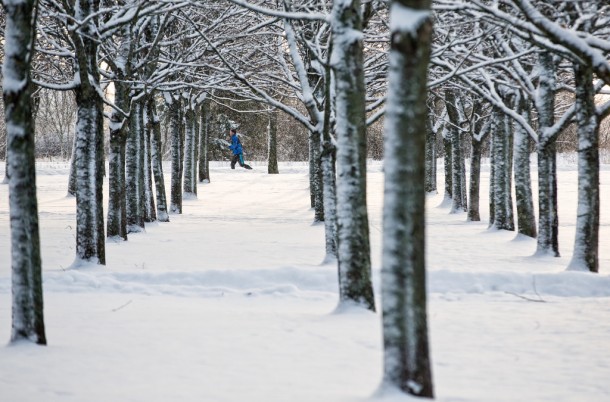 No one writes about winter more evocatively than Dickens. His depictions of London in the snow are the perfect combination of fairy tale setting mixed with the grittier, harder characters and plotlines that are to be expected from any Dickens story. A collection such as Dickens at Christmas combines his full length winter stories, such as A Christmas Carol, with wintery extracts from his other novels. The descriptive nature of Dickens’ writing means that it’s easy to become immersed in his stories, and he leaves little to the imagination when describing his wintery settings. For quintessential Christmas tales, look no further.

While White Teeth may not be a novel set in winter, it is a novel in which to become immersed. The lazy days that surround the Christmas holidays, and the weather that makes you want to curl up in front of a fire, are the perfect background requirements for White Teeth. White Teeth is a novel about race, sex, faith and multiculturalism, and with so many complex characters and interweaving plot lines, it’s a book that is difficult to put down. It’s therefore perfectly suited to sitting down for a few hours at a time with a hot drink to dedicate towards reading. Smith’s descriptive passages and multiple viewpoints mean that you’ve got to focus on the novel, and not read a few pages at a time. However, it’s not difficult to become involved in the characters and their storylines, making White Teeth the perfect novel for winter boredom.

The Road is a fascinating novel that follows the journey of a man and his son as they try to survive in a post-apocalyptic winter. The characters are never given names, and they spend large parts of the novel without meeting anyone else. Their struggle for survival is excruciating, and while large parts of the book are dedicated to discussions between the two, it is punctuated by situations that appear to catch both the characters and the reader by surprise. The unbearable situation that the survivors find themselves in, battling against the elements and struggling to find provisions, is enough to make anyone pleased to be inside, safe in the knowledge that regardless of the winter weather, nothing is as bad as what they’re reading. The novel is believable in a way that other post-apocalyptic stories aren’t, and is the perfect companion for a bitter winter’s day.

If the winter months leave you pining for warmer weather, L.P. Hartley’s The Go-Between is a novel that beautifully captures the unbearable heat of summer. Told from the perspective of Leo Colston, as he remembers his childhood, the plot follows the love of affair of two entirely unsuited lovers, and the consequences of their romance. Set at Brandham Hall during the height of summer, Hartley’s descriptions of the unbearable heat act as a perfect metaphor for tensions between class throughout the novel. The innocence of young Leo juxtaposes the decidedly mature nature of the letters he delivers. If you want a novel that is both captivating and a reminder of the warmer months that will follow the bitter cold, The Go-Between is the answer to your problem.

My Family and Other Animals – Gerald Durrell

If you’re similarly looking forward to warmer weather, and the adventures and travels that it tends to bring, then Gerald Durrell’s story of family life is your perfect companion. The humorous autobiographical novel follows Durrell’s childhood life on the Greek island of Corfu with his family. As Durrell is a naturalist, the descriptions of the wildlife and landscapes surrounding him are beautiful and are wholly able to transport you to a warmer time and place, even if you find yourself bundled up in winter coats. My Family and Other Animals is a novel that will remind you of the enjoyment of family summer holidays and childhood innocence, while allowing you to fantasise of the summer months ahead.