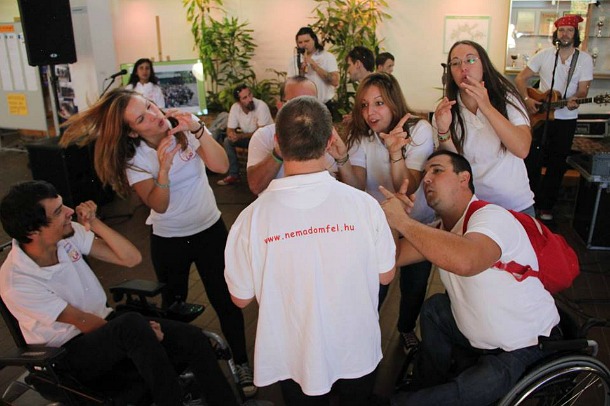 Never Give Up: Band of Disabled People

The music has already started, the volunteers are pushing the performers in wheelchairs on the stage – the camels arrived. Suddenly a change in the scene: we can already see cowboys and cowgirls performing the evergreen hit Catnajo. We are at the Budapest rehearsal of the Never Give Up Band.

Behind the “never give up” mentality

Following the Hungarian premier in September, the band visited several schools and locations in Germany with their new performance called the Never Give Up Show. Earlier, they gave concerts in Beijing and Switzerland, and this May they went on a tour to Transylvania, Romania. Therefore, the members of the band came up with the idea that they should cross the borders again, and show what they are capable of. 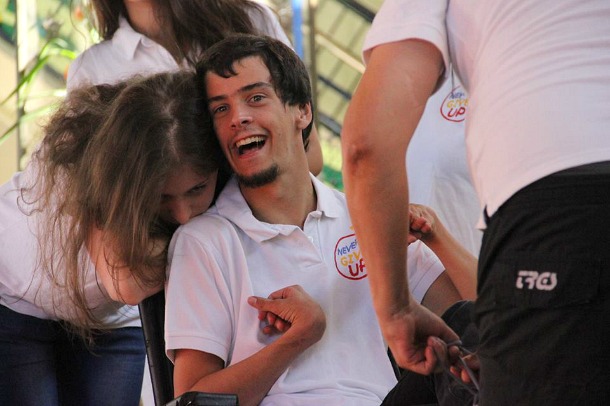 “The Never Give Up Band (Nemadomfel Együttes) is an integrated group, where the members are either volunteers or mentally, physically disabled or visually impaired people. The band is working with experienced musicians and professional sound and light technique. We play the combination of our own songs and well-known hits” – this is how they describe themselves on their Facebook page.

And why is their latest performance special? “At our previous concerts the band was in the center. This time we decided to perform a theatre play, and we integrated the disabled people in the movement part of the production as well” – tells the speaker of Never Give Up Foundation (Nem Adom Fel Alapítvány), Szabolcs Papp who started using a wheelchair after he was diagnosed with infantile paralysis (poliomyelitis). Right now he is not only performing on the stage, but he is also responsible for some of the communication tasks of the band. “All the dances are built upon the songs: in Catnajo we appear as cowboys, in Camel caravan we have our special camels. Besides the sound we would like to transfer our message visually as well.” 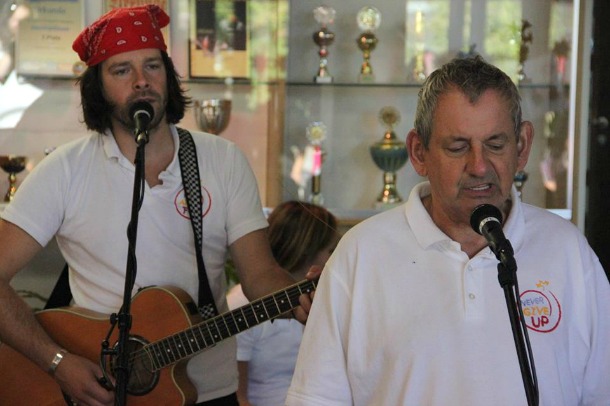 The Never Give Up Foundation also aims to help various disadvantaged groups and members of society, in order to foster their integration and the improvement in their situation. They are trying to support people so that they can use their own power and talent to be active participants or even organizers of the programs of the foundation.

Based on their motto “everyone is rich enough to help others.”

With this sentence they refer to the whole society: disabled people, Romani children living in poverty, but also the ones who “have everything they need”.

The organisation runs various activities. They integrate disabled people to the work market, and also they organise the programs of the Foundation with their help. Between 2008 and 2011 they collected more than 25 million forint (80,000 euro) with their concerts, which they donated for various charity aims.

Nick Vujicic, the internationally famous Australian motivational speaker, who was born without limbs arrived to Hungary for the invitation of the Never Give Up Foundation. “I met Nick the first time in Serbia. We could talk at midnight after one of his lectures. I had two minutes to convince him to come to Hungary. It was a big challenge to talk to him knowing that everything depends on what I’m saying” – shares the speaker about the circumstances of the invitation. 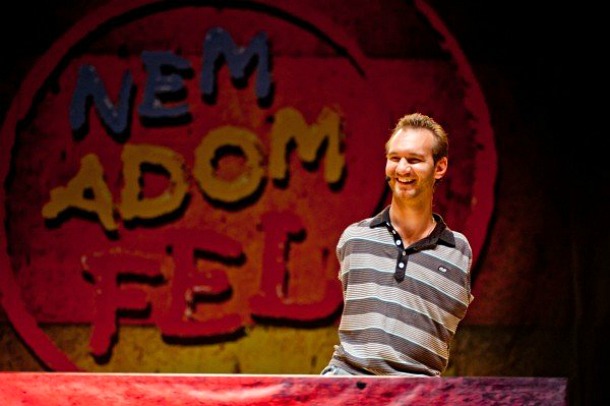 “Obviously the two minutes turned out to be twenty in the end. In my speech I was concentrating on the fact that we also want to share the same message with people as him: that they should never give up. The arguments seemed to have convinced him.” Afterwards Nick gave several successful lectures in Hungary.

The show must go on

Never Give Up Foundation is organizing integrated camps every year, where disabled and Romani young people spend their time together. They started to plan the Never Give Up Show at the camp this year, and the rehearsals followed later on at Budapest. 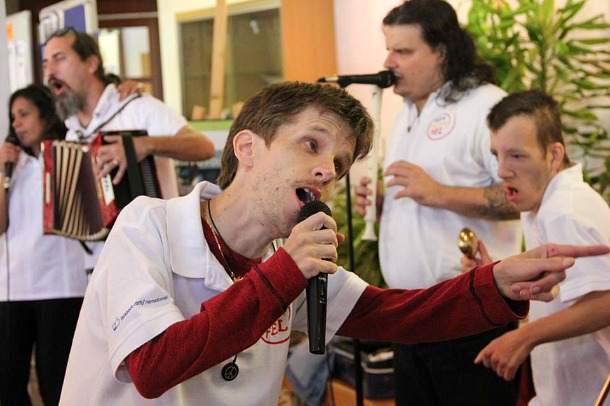 Everyone gets the chance to perform with the group, and the disabled people also had the opportunity to show their talent in their solo performances. When the time is there for the final scene, all of them come to the stage, so that they can sing together. Szabolcs is dancing with one of the volunteers: lots of people could envy them for their enthusiasm, the way how they are rolling on the stage and following the rhythm.

All of us have to fight with something

“Disabled and not disabled people – we can work and have fun together. I think dancing and music are the best tools to transfer the message to people that they should never give up. We all feel ourselves better if the music is on” – says Szabolcs.

“We organize some parts of our life differently than people in general. Still, no one has to be afraid of us, we are just the same as others” – he adds. 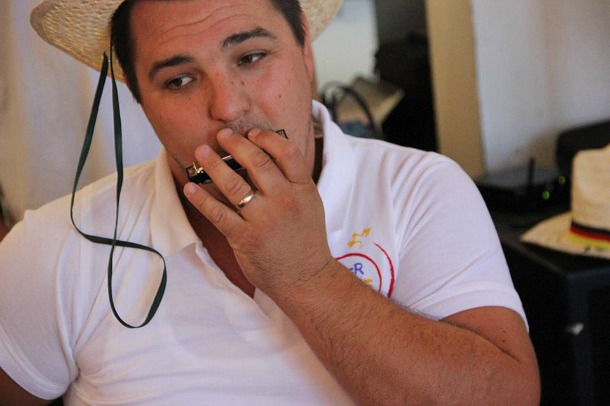 For the question if he can feel the difference between how people are looking at him on the streets or on the stage, Szabolcs comes up with a wise answer:

“The feeling you evoke in people depends on the way how you think about yourself. The ones who don’t have experience with disabled people might look at you in a strange way, but with your aura you can change their attitude easily.”

And where does he get all this energy from? “I strongly believe that God created everyone for a reason. You have to cope with your own situation, regardless where you are from, what injuries you were born with or which financial status you are at. All of us have to fight with something. The question is whether we want to fight. For that we need power and we should never give up.“