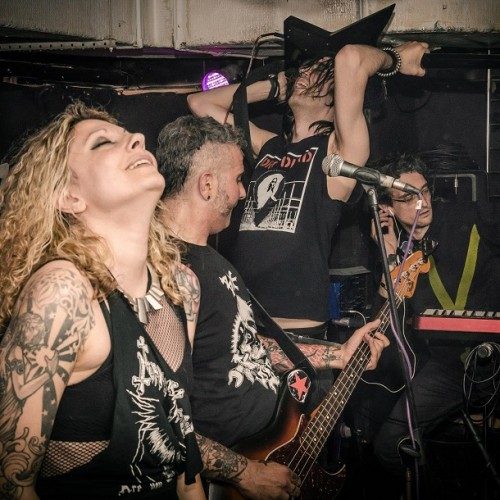 Living in a Psycho-Chaos Era! Interview with Kalashnikov

Squats. DIY. Rebellion. These are only a part of the essential spirit of punk which has been contested and commercialized during the years. Now, let’s meet one of the truest punk bands in Italy, Kalashnikov. Punx, love, squats and resistance from Milan, since 1996.

After many years on tour, which took you far away, even in Russia, what is your most powerful memory? And what are the differences in the organization of a concert in a squat or in underground places between Italy and Europe?

Kalashnikov: After 15 years spent playing, millions of kilometers covered all around the world and many albums… the liveliest memory is the beginning: when we did not know how to play the instruments and we were happy if we finished at the same time one song. At the beginning, moving from Milan was difficult, it was a challenge finding a gig, we didn’t even use the case of the instruments and we travelled with the guitars over the shoulder! And nowadays we go on tour on the other side of the world: this year we have played in Yakutsk, Eastern Siberia, a very far and desolate region in Russia, or in Murmansk, in the outer north, near the Arctic Sea. However, the enthusiasm of the first, sloppy, years hasn’t been the same in the recent years, nor the latest experiences left traces in our memory as deep as the first ones.

As for the organization, every country as specific characteristics. Self-managed places in Switzerland or Germany are really well organized, structured and comfortable. In other places, you can feel the uncertainty, but that’s normal, it depends on the difficulties in the management of the squat that the boys and girls meet in that specific social and political context. In Russia, it happens to play in restaurants, clubs, discos and everything undertakes a surreal aspect. Regarding technical aspects, there are countries in which everything functions better than the others do, but we are not interested in this. The important thing is the enthusiasm and passion we see in the people we meet. We know how difficult it is to live in a squat and how it is difficult to manage it; we always feel solidarity and we offer collaboration for these realities. We do not need fashion equipment, stages two meters from the ground or stroboscopic lights to do a concert, we need human passion! In Minsk, we played in a garage with accidental equipment, in the middle of January, under the snow, after we had been taken for two hours by the Belarus anti-terrorist police: maybe it has been one of the best concerts ever! 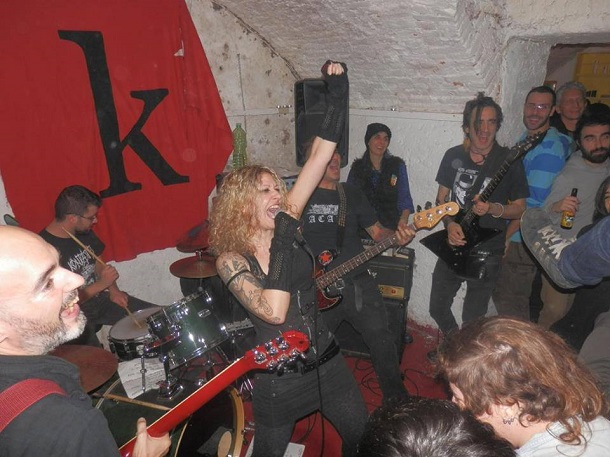 How do you see the musical scene, especially punk, in Italy?

In Italy, we always have had great bands, speaking of punk and sub-genres of punk. And today it is still so. Many bands play around. But, we believe that punk is not only a musical genre, it is also a practice and lifestyle, that is founded on values connected with the anarcho-libertarian culture. Today, in our country, many bands call themselves punk only because they play fast and simple music with distorted guitars: this ‘punk’, which in Italy is particularly spreading, is not for us. Broadly speaking, music in Italy… well, today the market is monopolized by the winners of talent shows and by the same old names that still sell LPs. The Italian musical market is a gerontocracy. The interesting music is in the underground scene, not on the shelves or on I-Tunes hit lists.

You are certainly critic towards the establishment and society. What are your hopes for the future, for our system? Do you believe in a radical transformation of society?

We are anarchists of the 21st century, we do not believe in a radical transformation of society. We believe in the possibility of building up autonomies, places of creativity and resistance among the folds of the established system. Physical places, of course, but also conceptual. We believe in the everyday fight for conquering free places, we believe in solidarity and equality. In the present state, we do not hope in other things. It is not pessimism or nihilism, it is only a realistic way that brings to action: do not wait for social revolution in order to take what you want: take it when the cop is watching something else, hiding yourself in those areas not controlled by the system. A strategy of escape more than attack actions.

We believe in the possibility of building up autonomies, places of creativity and resistance among the folds of the established system

Lately, the news of clearing out of squats and riots with activists happen every day. You are part of this movements/culture; what do you think about that?

Clashes, clearing outs and arrests have always been present and always will be. The rule is  not to get caught. Repression is inevitable, today as always. On its strength, on the reasons that determined certain choices by the investigators, we can make many and different evaluations. But the important thing is to know the risks and the legal implications of what you are doing and take cautions.

What are your plans for the future?

To continue to do what we are doing, searching for new ways of expression that we have not explored yet, reach far places where we have not been and where we can play. And live our band life even more intensely, freely and emotionally.

Kalashnikov were born in 1996 on the dirty floor of a squat in Milan, to give vent to the adolescent restlessness of three guys with their ears clogged by Wretched, Bad Religion and Clash. Under the drunkenness of the heavenly libertarian nectar and rejecting the ruling alternative thrash music, Kalashnikov are created with the wish to put together their own utopias and passion. Through the years there were many changes either in the line-up, or in our music and our lyrics, but anyway some features have lasted: Kalashnikov have always played a concentration of melodic and fast music with high libertarian spirit, following the path of DIY.