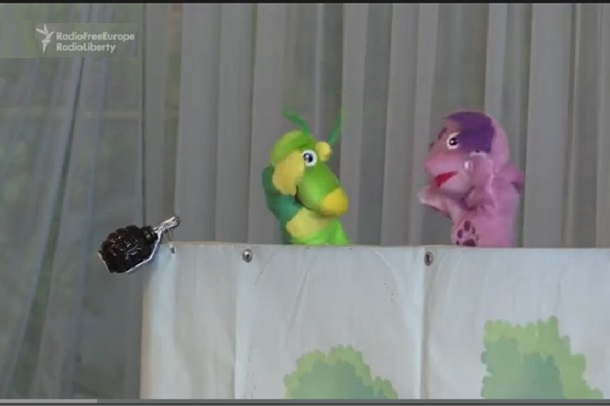 Eastern Ukraine has been the battlefield of many wars, from WWI to the recent outburst of the civil war in March 2014. Over the course of these many years a number of forgotten explosive devices such as unexploded ammunitions, land mines and booby traps have been piling up, representing a significant danger for the local population.

Disguised as household objects and sometimes even as toys, mines have killed 65 children and injured 168 since March 2014, according to UNICEF figures. And the danger is also real for the over 60 thousand children whose families have been internally displaced by the conflict. In the words of Oleksander Kimirin from the Swiss Foundation for Mine Action (SFMA):

They don’t know where fighting has taken place, or what kind of fighting, while they were absent from their homes. And once they come back to these areas, they are in great danger if they don’t know what to do when you encounter these things, dangerous mines, unexploded munitions, and other ordnance, which can endanger life and limb.

Mr. Kimirin, together with the SFMA, is trying to change this course of events by organizing puppet shows in Eastern Ukrainian schools to teach children about the dangers of explosive objects and what to do if they encounter one. And the children learn fast:

A little girl says “if you see an unidentified object, you can’t pick it up! It could explode.” while another schoolboy, when asked who he would turn to if he found something suspicious, answers “my parents or other grown-ups”.

“The key message for the children is not to handle anything they see on the streets, even toys” says Ihor Mikhailov, another collaborator to the SFMA initiative. School officials are also very enthusiastic about this project, as many of the facilitiess are located near old military bases and checkpoints.

“It’s really possible to find these objects around here. So it’s really dangerous for the children” adds Inna Shtepa, Deputy Head Teacher at a school in Artemivsk, about 15 kilometers from the front “So I think the work of this Swiss foundation helps them to avoid these awful situations.”