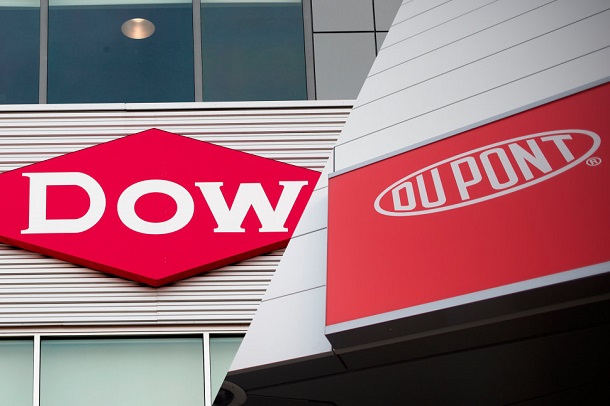 DowDuPont: A Merger of Equals?

On December 11 Dow Chemicals and DuPont announced their intention to merge into a giant worth about $130 billion that would completely change the chemical and agricultural industry in the United States and worldwide. The union, which comes in responses of the slowing down of the agricultural market, will mark the end of two of the oldest American corporations that were both founded in the 19th century.

The new company will be called DowDuPont and have dual headquarters in Midland, Michigan and Wilmington Delaware according to the current location of the companies. Andrew Lewis, Dow´s president chairman and CEO will become the chairman of the new company, while the spot of CEO will be given to Edward Breen who covers the same position at DuPont since November of this year. Then, the company be split into three more specialized sections that are going to focus on the corresponding market segments and therefore be more able to respond to challenges. The resulting companies will be active in materials, specialty chemicals, and agrochemicals.

88% of the new materials company´s $51 billion revenue will be based mostly on Dow´s businesses in monomers, resins, and bulk plastics such as polyethylene and polyurethane. DuPont will contribute its comparatively specialized Teflon and nylon assets. The combined business will be a strong number two worldwide, following the German BASF Chemicals.

The specialty chemicals company will serve by its nature very specific niche markets, so its products will be very diverse, from Tyvek and Kevlar to enzymes and semiconductor photoresists. DuPont will be the biggest contributor with about 85% of the company´s projected $13 billion revenue. Dow´s electronics and communications, nutrition and health, safety and protection and industrial biosciences sections will make up the rest.

But that´s not all: on the same day as the merger announcement, Dow disclosed its intention to buy the other 50% of Dow Corning´s shares, a company that manifactures silicone products and that is currently co-owned by Corning Inc. One third of the company´s $6 billion revenue comes from the production of polycrystalline silicon which is used in solar cells and other electronics applications. This new Dow section would be included in the specialty chemicals company creating a bigger and more specialized $19-billion corporation which would attract more investors.

The new agrochemicals company would become the largest agribusiness corporation in the world with a projected revenue of $19 billion generated by its soy, cotton and corn production. Dow will contribute $5 billion of insecticide revenue and $2 billion of seed revenue, while for DuPont the figures are $3.5 billion and $7.5 billion respectively. The company is expected to cut $1.3 billion by unifying the R&D costs.

Is it really a merger of equals?

The companies have almost equal market values, which according to Mr. Breen, CEO of Dupont “Always makes for quicker, easier negotiation.” Moreover, many formal aspects of the union put both companies on the same level; for example when it comes to stocks, shareholders of Dow Chemical will get 1 share in the new DowDuPont for each Dow share, while DuPont shareholders will get 1.282 shares for each DuPont share. The structure will give Dow and DuPont shareholders equal stakes in the combined company, excluding the impact of preferred shares.The company will also have double headquarters, the top executive positions will reflect both sides and the board will include 16 members, 8 coming from DuPont and 8 from Dow.

All seems good and well, but one part of the deal that cannot be underestimated is the companies´ efforts to cut costs ahead of the merger. DuPont said it will cut $700 million in 2016, causing a pretax charge of $780 million. The company is expected to cut more than 5000 jobs, a total of about 10% of its workforce, sparking outrage amongst workers and investors who believe that the current CEO Mr. Breen does not have DuPont´s best long-term interest in mind.

Stockholders who share a similar opinion will not be able to do much. Their options include in essence either selling their shares or filing a lawsuit in the Delaware Court of Chancery. This rather drastic solution would result in a temporary obstruction of the merger procedures and possibly in a spike in stock prices, which would benefit shareholders at the moment of selling. There are currently no allegations of wrongdoing from neither side of the transaction, but in today’s litigious society, billion dollars mergers are frequently met with legal action.