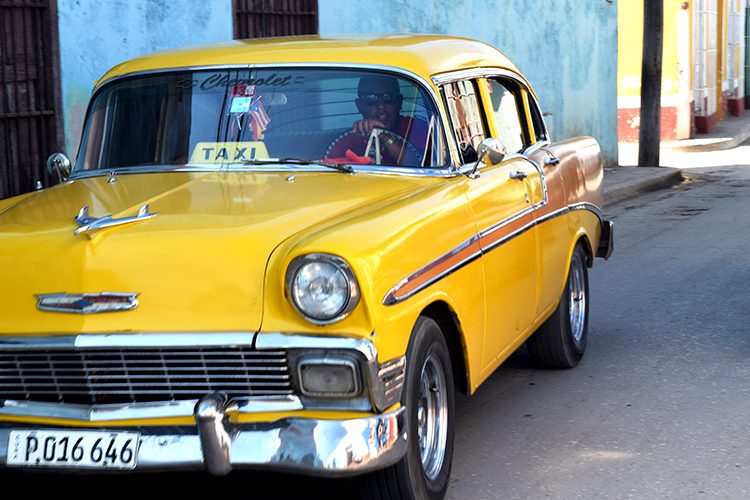 Taylor RobinsonFebruary 2, 2017
CubaTravel0 Comments 1
The following article is published in the #RGNNCuba Magazine: Vol. I, Winter 2017, produced during ROOSTERGNN Academy’s first Travel Journalism & Photography Internship Seminar in Havana and Trinidad, Cuba, under the editorial direction of RGNN Expert and Mentor Benjamin Jones. Follow #RGNNCuba for all of our Cuba coverage.

My aviator frames slid down my nose in the backseat of a cotton candy blue 1950 Oldsmobile as we coasted over each bump in the road. A turquoise Chevrolet zoomed by on the opposite side of the road.

“1956,” Pablo said, very a matter-of-fact, in Spanish. He was our taxi driver to and from Playa Ancon, a beach just outside of Trinidad, Cuba. “To me, that is the most beautiful car.”

The engine rattling, the long leather seat shifting, Pablo was overtaking a slower horse-drawn wagon ahead.

Horses on the same high-speed road we’re driving in? I’ll admit I became uneasy with each horse carriage he passed, but for this town on the island nation’s southern coast it was completely normal.

A four-hour drive from the country’s most popular destination, the capital Havana, Trinidad is a picturesque, Spanish colonial town of vibrant colors and rich history where one can expect to pull up to a three-way stop sign and see a man on a horse on one side and 1952 Chevrolet on the other.

Cuba is opening up for American tourism for the first time since the 1960s. To a city girl just a week shy of 22, Trinidad was a time warp of classic cars and horseback riding through a cobblestoned, close-knit community.

Pablo the taxi driver wasn’t the only one with a car that made you feel like you were transported into the mid 20th century. These vintage cars, Fords, Chevy’s, Cadillacs and many others filled the streets.

Before the U.S. embargo on trade with Cuba, the car industry was a major component in the Cuban economy. After the two countries cut ties, American car imports to Cuba largely came to a halt, and the cars from those pre-embargo years have cruised the streets since.

Many of them shiny and well kept, the cars had Trinidad’s colorful architecture as a perfect background, as a quick stroll down any block revealed buildings with of least six different colors each – blue, fuchsia, red, yellow, burgundy, teal and sometimes a combination.

Amazed, I jumped in front of the oncoming automobiles as they drive down the road and I snapped a photo, careful to step back on the sidewalk just in time. 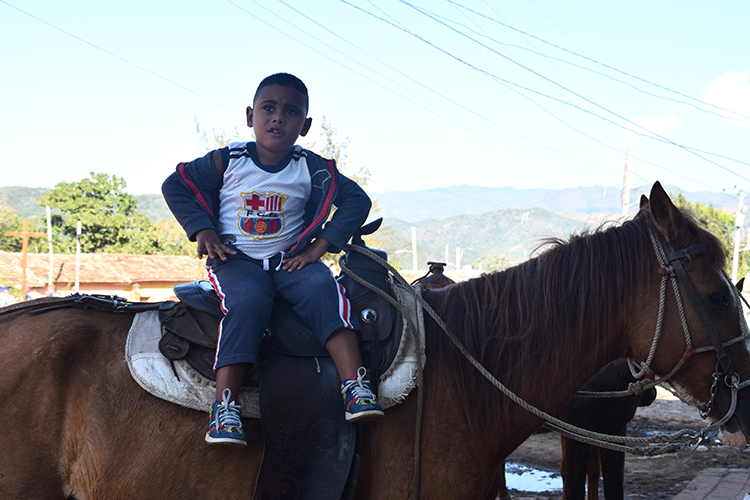 If the cars were not surprising enough, for every old Detroit creation, there were two horses.

Unlike the vintage cars, which were all around Cuba, cowboys and horses have a special place in Trinidad’s heart. When the Spanish colonized Trinidad, farmers relied on traveling by horse to grow, harvest and sell sugar cane, tobacco, and coffee.

Today, horses are just as important. With ease, one can spot two men selling meat from the back of a horse-drawn wagon. Or another man on horseback riding down the road, just traveling from one point of the town to another.

While many of those on back of a horse appeared to be your stereotypical cowboys, some looked like typical teenagers, dressed in shorts and t-shirts, or a Barcelona soccer jersey. The youngest I saw was a boy no older than four, who proudly hopped on his family’s horse, posing for our pictures.

Not many 4-year-olds where I’m from have the grit to control a fast horse down a cobblestone street, turn around, and come back smoothly. Actually, I don’t know any. 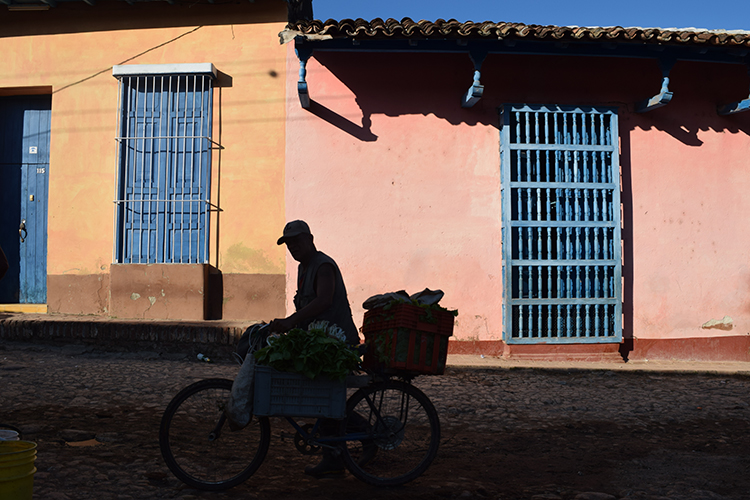 A man in Trinidad sells lettuce one morning | Taylor Robinson

The more time I spent in Trinidad the more I realized it was a town about hustle, about using what was available today to make it through to tomorrow.

Large cosmopolitan cities can no longer claim to be the sole places of a hustler mentality. In Trinidad there may not be skyscrapers or brownstones, or streets full of double-parked cars, but if you need lettuce, a man will ride by on a bike with a basket full of it for sale.

Onions? Listen for someone at 9 a.m. yelling “Ceboll-o-o-llaaa!” as he walks past a woman setting up cups of coffee to sell in front of her house.

As everywhere else in Cuba, there are no big franchise restaurants monopolizing the economy. No big name brands or fast food chains. A tourist shop owner most likely has a family member that makes everything on sale by hand up in the mountains. 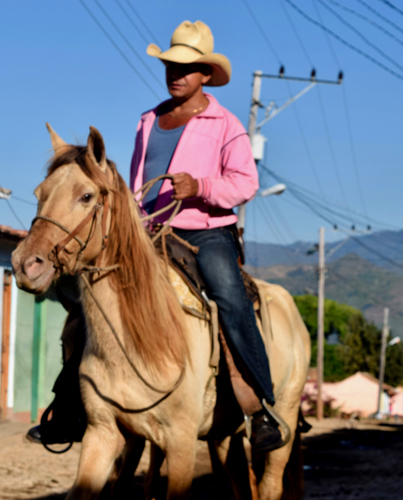 After a long day of shooting photos of old Fords and colonial cowboys, I walk to the park, whip out my iPhone and type a long series of numbers to log in to the town’s only public Wi-Fi network, anxious for it to connect.

Wi-Fi connection is unpredictable and can be purchased (for about 2 CUC. or $2 at $1 to the CUC) by the hour.

Even with its vintage appeal, the modern day’s technological demands pressure Trinidad to try to keep up with the rest of the world, even though following what other cities do is out of her character.

For an hour, I exit the time warp that is Trinidad and re-enter my chaotic reality of Instagram likes and name brands, of artificial beauty, and franchise restaurants, thinking how sad it will be to leave this place, a town which squeezes proudly onto her past, with one foot into the future.