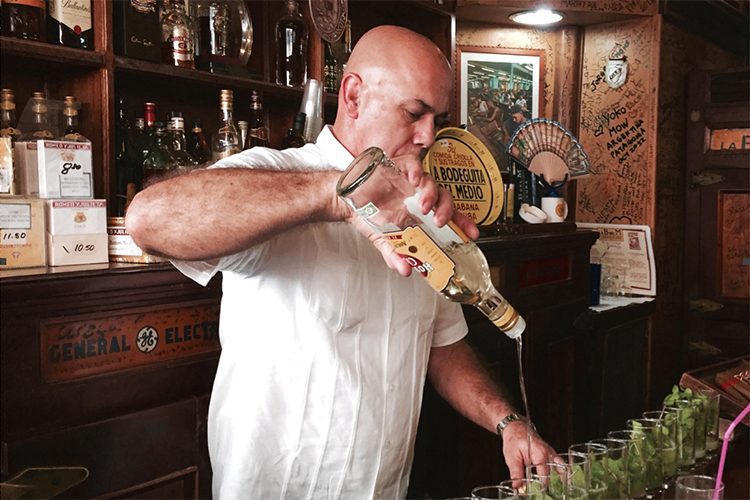 Hanging with Hemingway in Havana, Cuba

James RaeFebruary 10, 2017
CubaTravel0 Comments 2
The following article is published in the #RGNNCuba Magazine: Vol. I, Winter 2017, produced during ROOSTERGNN Academy’s first Travel Journalism & Photography Internship Seminar in Havana and Trinidad, Cuba, under the editorial direction of RGNN Expert and Mentor Benjamin Jones. Follow #RGNNCuba for all of our Cuba coverage.

Before I was close enough to even view the entrance sign, the masses of tourists, all frantically piling through a narrow doorway, was enough to tell me that I had arrived at La Bodeguita La Medio, in the old city of the Cuban capital Havana. This was a preferred watering hole of the famed U.S author and raconteur, Ernest Hemingway during the writing of several of his most famous works such as, ‘The Old Man and the Sea’.

History and nightlife seem like an improbable combination, but scattered around this hustling bar were framed quotations and archaic portraits and photographs, all boasting the past presence of the man responsible for its popularity.

After jostling my way inside, I skimmed through the menu, contemplating my order. However, before deciding, I was asked by the bartender, “How many?” Confused, I held up two fingers, with the blast of the salsa band preventing me from replying verbally.

With one swift movement, he placed two glasses in front of me and filled them firstly with mint leaves, followed by a generous serving of rum and poured in a measure of fresh lemonade to create the signature drink here, the mojito.

It wasn’t until looking around when I realised everybody was drinking the same cocktail. This, I later discovered, was because it was Hemingway’s drink of choice here. The two drinks came to 10 CUC (or £11.70 at £1.17 to the CUC) – a little pricey, but worth it. The rustic vibe, energetic atmosphere and live band were enough to make me want to spend the whole day here, but I had to leave if I were to visit more of Hemingway’s much-loved venues. 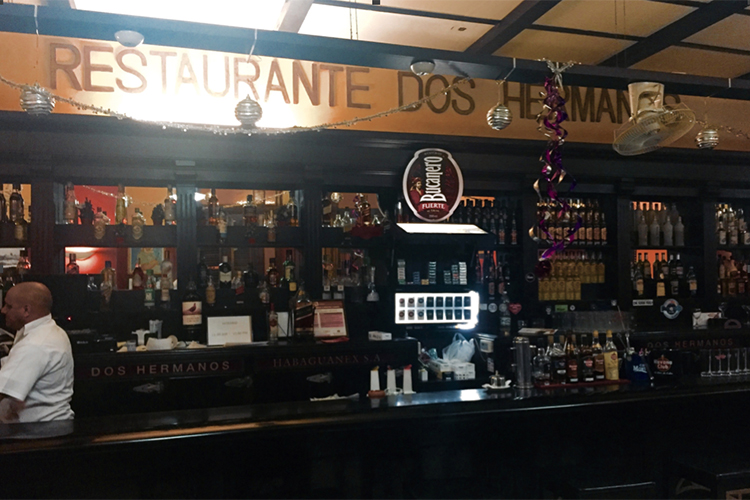 Next on the list was Dos Hermanos, a more relaxed, and somewhat dated, bar located near the Malecon, Havana’s seaside promenade. Unlike La Bodeguita, this place did not promote the Hemingway experience to the same extent, which surprised me because of the business it would undoubtedly bring., although there were a few plaques mentioning the author and a scattering of photographs of “Papa”.

One benefit of the quietness was that it permitted me to talk with the bartender. She said that, as the name suggests, the bar was founded by two brothers in 1884. She also mentioned that it was a popular spot with the author in the 1930s, presumably because of its proximity to the ocean from which he often drew inspiration when writing.

However, when asked if there were any memorable moments he had at the bar, she responded: “The only thing I know of is that he gave very good tips.” An interesting fact, but the lack of specific significance the bar had to Hemingway’s writing was perhaps why they chose not to heavily publicise his presence.

Despite this, the bar is still an intriguing spot for those interested in general Cuban history. The bartender told me that according to legend, following the end of the Spanish-American war, and the end of Cuba’s status as a Spanish colony, the first Cuba Libre cocktail was created as a celebratory beverage.

Before leaving, I ordered Hemingway’s other favourite drink, a daiquiri for 4 CUC. An enjoyable bar for those in search of a tranquil atmosphere and just a minute’s walk from the picturesque Malecon. 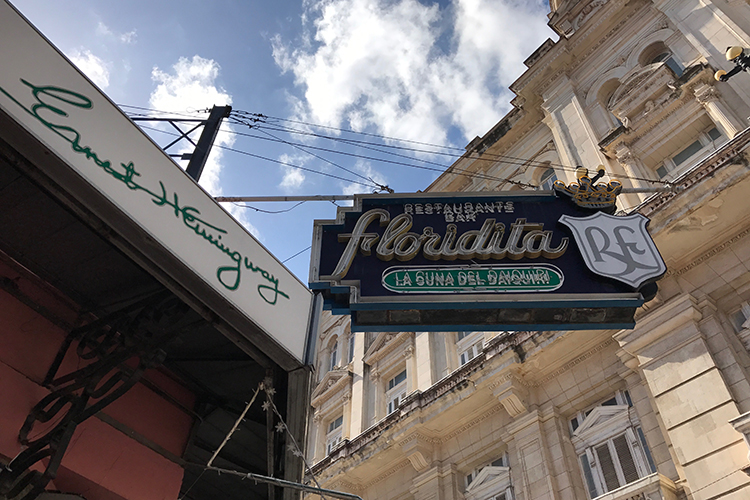 My final stop was at El Floridita, arguably the most famous of the Hemingway bars, located in the heart of Old Havana. The type of venue this was became apparent before even entering. At the door stood a large guard who was preoccupied with denying a local resident entry to the bar. When we came to enter, he smiled and led us in.

Through the door, my eyes were first drawn to the sparkling grandeur – from the marble floor to the glass chandeliers – and then to the unfathomable busyness. I sat down at the only table available, positioned directly beside where the salsa band was mercilessly shaking their maracas.

El Floridita is renowned for its daiquiris, which bartender Constante Ribalaigua reportedly created shortly after World War 1. However, it was Hemingway who popularised the drink in the 1930s.

With this in mind, I ordered a lemon daiquiri, one of the 15 flavours available, for 6 CUC, but exceptionally tasty, with a perfect balance of shaved ice, lemon and rum. Like La Bodeguita, the bar promotes Hemingway however possible; with even a gift shop featuring Hemingway ashtrays, T-shirts and other tourist tat.

Visiting these three venues highlighted the vastly different experiences that each one offered. Whether you are in search of a Hemingway bar with a lively, relaxed or sophisticated ambiance, you won’t struggle to find one that satisfies your requirements. My personal favourite was La Bodeguita, due to the happy, upbeat atmosphere that both the setting and the people radiated, which was partially down to many customers feeling the beat of the salsa band after one too many mojitos.